Turning down the heat

15th July 2004 |
It was a process of turning down the heat as South African scientists, health workers, government officials and activists met to clarify recent statements by the Medicines Control Council and the Minister of Health.

It was a process of turning down the heat as South African scientists, health workers, government officials and activists met to clarify recent statements by the Medicines Control Council and the Minister of Health.

‘We did not want another controversy when we came here [to Bangkok] but that’s what’s happened,’ said an angry Achmat. Earlier in the day he had appealed to conference delegates to support a ‘science and human rights-based approach’ to health policy and implementation in South Africa.

Achmat said the TAC was angry because prior to the AIDS conference there had been an agreement with provincial heads of health at MinMEC that potentially sensitive issues would be discussed in a reasonable way at the international conference and that the focus would be on scaling up South Africa’s comprehensive plan to care and treat for people living with HIV/AIDS.

‘What has happened was an undermining of that agreement and that is why we are so angry,’ he said.

UN Special Envoy on HIV/AIDS Stephen Lewis said the world watched in ‘some bewilderment’ at the ‘confusion, obfuscation, complication and controversy’ that surrounded the latest episode on nevirapine and the health ministry.

He said it was a ‘deep irony’ that impoverished countries around South Africa that did not have the same capacity were doing their utmost to provide antiretroviral treatment to their citizens.

‘It seems almost unbearable that those who survived the cancer of apartheid lived to die from a communicable disease,’ said Lewis. It was a situation which ‘the world begs you to resolve’, he added.

Stung by criticism that TAC actions were unpatriotic and designed to embarrass the South African government on international platforms, Mthathi said the health minister’s actions and lack of determination to implement antiretroviral treatment were a cause of greater embarrassment.

Both MCC Registrar Precious Motsoso and Gauteng MEC for health Gwen Ramagopa addressed the meeting from the floor to assure South Africans that programmes to prevent the transmission of HIV from mother to child would be revised only in the best interests of South African mothers and children.

Motsoso   clarified that nevirapine would continue being used for antiretroviral therapy treatment but that it was not recommended as a single dose in mother to child HIV prevention. She said there was no intention to de-register the drug.

Mention the Wold Conference on Sustainable Development and possibly the last image that might come to mind is of the fertile valleys in the Western Cape and the splendour of the Stellenbosch vineyards. However, in microcosm, the issues facing a small corner of this community are the issues that the world summit must address – access to clean water, sanitation and a healthy environment for all. In this audio report, the relationship between high faecal pollution levels in the Plankenbrug River and the dense, informal settlement of Kayamandi are explored and the implications of this for everyone down river. 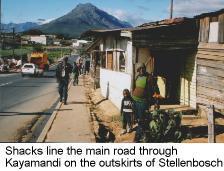 Intergovernmental negotiations that will lead to a Framework Convention on Tobacco Control governing the sale and marketing of tobacco are set to begin in earnest today (Tuesday).