Men can change
Living with AIDS # 194

14th October 2004 | Khopotso Bodibe
For the AIDS epidemic to continue growing unabated it takes a few good men to do nothing. With this in mind, programmes by men and for men are now in place to raise awareness among men about their role in the spread of HIV and to advise them on how they can change.

For the AIDS epidemic to continue growing unabated it takes a few good men to do nothing. With this in mind, programmes by men and for men are now in place to raise awareness among men about their role in the spread of HIV and to advise them on how they can change.

KHOPOTSO:   The evidence shows that women are more likely to be infected with HIV. According to the 2003 antenatal survey, the Department of Health estimates that of the 5.6 million people found to be HIV positive by the end of last year, over 3 million of these are women between the ages of 15 – 49, compared to 2.4 million men of the same age. A number of factors influence this imbalance. Among these are traditional norms and value systems that allow men to have as many sexual partners in the name of proving their superiority, virility or just simply, their male-ness. Violence, which often leads to the sexual abuse and rape of women and young girls, thus exposing them to the risk of unwanted pregnancies and STIs including HIV, is another factor. Over the last few years in South Africa, a concerted effort has been made to target and involve men in programmes aimed at reducing the prevalence rates of HIV, gender-based violence and sexual crimes as well as to sensitise men about the need for mutual respect and equality between the sexes.

LEE BUTHELEZI: My name is Lee Buthelezi. I’m from Katlehong’¦ I’m 25 years old’¦ I was socially brought up knowing hore (that) if you want to have sex with a girl and she doesn’t want, you just clap her twice or three times and then, she will give you what you want. I grew up doing those things, you know: beating women and forcing myself (on them) and all that. After being in contact with MAP a couple of years ago I realised that the way that I grew up was actually wrong, it wasn’t supposed to be like that. If you want to have sex it should be a mutual feeling, both from your partner and you, and you agree on doing that. But when I was growing up I wouldn’t wait for (an) agreement or consent of some sort. I’d just do exactly the way I wanted, you know’¦ It is actually a challenge. I think we need to change that thinking’¦ If I can change, personally, I believe that the ones who come behind me will also change, you know.

KHOPOTSO: Lee Buthelezi now works as facilitator for MAP, the Men as Partners programme in KATORUS ‘ which comprises the townships of Katlehong, Thokoza and Vosloorus on Gauteng’s East Rand. His motto is ‘ligotshwa lisemanzi’, an isiZulu expression meaning, ‘children should be taught well at a tender age.’

LEE BUTHELEZI: We’re targeting youth to work with MAP to actually mould them as they grow to become better parents and not to learn from what they see outside and even behind closed doors’¦ The way we grew up, we were brought up in a manner that women should be beaten in order to get what you want from them. But we’re trying to change that stereotype thinking, you know’¦ and show them that you should talk, discuss and reach a consensus together with your partner.

KHOPOTSO: But programmes such as Men as Partners cannot go it alone in breaking these stereotypes. A new style of parenting that is sensitive to the social, economic and political injustices caused by gender differences is needed. The Men as Partners network exists nationally within organisations such as the Planned Parenthood Association and Engender Health. Part of its objectives is to address gender imbalances and how it aids the growth of the AIDS epidemic as well as improve the reproductive health of men and women. What makes this project unique? Dumisani Rebombo is co-ordinator of the Hillbrow chapter of the programme.

DUMISANI REBOMBO: The Men as Partners programme does not impose issues on men. It asks men to come on board and discuss things and come up with solutions that are healthy for both the men and the women.

KHOPOTSO: Although there is no documented evidence to prove how the programme has changed the mindset of South African men for the better since its inception in 1997, there is some noticeable change. Earlier in this report, Lee Buthelezi of Katlehong, showed that it is possible for men to change. Mbuyiselo Botha, co-ordinator of the South African Men’s Forum, which came into existence four years ago, says there is only one step to take before one can become a desirable kind of man.

TORONTO ‘ A South African study has conclusively shown that babies with HIV positive mothers who are exclusively breastfed are significantly less likely to get the virus than if they get breastmilk and other food mixed.

Health minister Dr Manto Tshabalala Msimang sent a letter this week to the Global Fund to Fight AIDS, TB and Malaria requesting that its R720-million grant to KwaZulu-Natal be channelled through the SA National AIDS Council to be disbursed throughout the country.

Philipp Krebs, a Swiss-born artist who has lived in Cape Town for the past five years, creates unusual and extraordinary public works of art using balloons. In a project called Umbono, a Xhosa word that means vision, Krebs uses larger than life balloons to create awareness and educate people about safe sex and HIV/AIDS. Khopotso Bodibe went to view the Umbono exhibition, and filed this report. 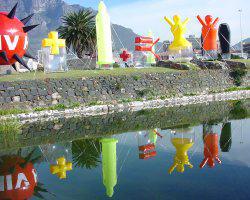