25th August 2006 | Anso Thom
The hospital referral system is failing, and patients are getting stuck in the huge gaps between clinics and hospitals, district hospitals and more specialized regional and tertiary hospitals.

The hospital referral system is failing, and patients are getting stuck in the huge gaps between clinics and hospitals, district hospitals and more specialized regional and tertiary hospitals.

The young man briefly opens his bloodshot eyes and  scans the bleak, chaotic surroundings. His muscular body shivers uncontrollably beneath the white, government embossed sheet as the paramedics lift him onto another trolley. He tries to raise both his arms upright, his hands and forearms, thighs, chest, back and feet wrapped in thick, white bandages.

An empty drip bag, still connected to his one arm, lies next to his head.

With 40% burns due to electrocution and almost certain to lose his one hand, the young man or Patient 1266089-0, should immediately have been referred to Tygerberg Hospital’s 22-bed Burns Unit.

Tygerberg is a massive tertiary hospital and the place where secondary hospitals refer patients in need of specialist care. But Patient 1266089-0’s luck had run out’¦Tygerberg was refusing to take him, saying they had no beds.

His first port of call, Khayelitsha Day Hospital, was not equipped to care for him and so 24 agonising hours’ later the severely traumatized 25-year-old man from Khayelitsha found himself on a trauma trolley in GF Jooste (GFJ) Hospital’s bustling trauma ward ‘ his naked body shaking from shock, pain and severe dehydration.

He arrived at GFJ around 11.30am on a Tuesday. A week later he was still at GFJ and his chances of survival were between 30 and 40 percent and decreasing rapidly as he risked sepsis to his burn wounds from being in an open ward.

Clearly the referral system has failed Patient 1266089-0, like many others unable to secure beds in tertiary hospitals.

Dr Neshaan Schreuder, head of trauma at GFJ, sighs and signs the ambulance release form for Patient   1266089-0, before continuing to attend to one of the close to 80 patients in the overcrowded and noisy emergency ward.

Some patients had arrived the previous afternoon. Others, like the young woman in the resuscitation area who overdosed on rat poison, arrived with the early morning rush.

She is bound to occupy the life-saving equipment for a day or two as the hospital’s high care unit is already full.

On any given day patients are packed into GFJ’s emergency ward like sardines. An onlooker would find it hard to make sense of the chaos as staff and patients rush or shuffle back and forth across the hall-like room with the dull walls, some clearly doctors with the giveaway white coats and stethoscopes, others patients with soulless eyes and drip bags clutched in a boney hand.

All revolves around a hefty ledger book where the front-end nurse records patient’s names, prognosis and level of emergency, indicated by a coloured sticker next to their names.

If patients have a red sticker, they will be seen immediately. An orange sticker will be seen soon after and a yellow should be attended to within an hour or two, but could wait up to 12 hours.

Green stickers are awarded to patients who should be seen at primary health care level and complain of anything from hemorrhoids to hangovers.

As one doctors quipped: ‘Good luck,’ if you have a green sticker.

But Patient 1266089-0 is a reflection of a broader problem. The referral system was introduced by Government to decrease the load on tertiary and secondary hospitals. Bascially, it meant that non-emergency or non-trauma patients would first be seen at primary health care level (clinic or community health centre) and would then be referred on to the various levels of hospital care ‘ district, secondary and finally tertiary.

But many patients who are waiting to be referred or are not able to secure a bed because the hospitals are full, end up waiting in overnight trauma wards for days on end, collapsed on trollies with thin mattresses, scant bedding and inadequate ablution facilities ‘ whether they end up at GFJ in Manenberg, George Hospital on the garden route or Eben Donges Hospital in the Worcester winelands.

‘Forget everything you’ve seen on ER,’ mumbles trauma doctor Julian Fleming. He squeezes his bulky frame between the trollies and pushes a thin, tall man in a wheelchair to a quiet corner where he examines him on a chair.

There are no available beds and many patients are either huddled on a bare wooden bench or in a chair in the GFJ trauma ward.

Nearby, a woman groans and vomits into a stainless steel bowl, her yellow complexion a clear indication of jaundice. She is sitting on a chair, squeezed between two other patients, their HIV-wracked bodies hardly making an indentation under the baby blue hospitals blankets.

No nurses are in sight and her friend takes the bowl to empty it in the public toilet at the entrance to the trauma ward.

Fleming shakes his head: ‘It is rather crazy. The multi-drug resistant TB patients are mixing with the HIV positive patients, but there aren’t any beds in the wards, so they end up sitting in the overcrowded trauma ward.’

He believes that many nurses simply run away and hide on their shift, unable to cope with the relentless stream of new patients and those waiting for a bed in one of the wards or at the tertiary hospitals.

‘Those nurses that do try to get the work done are inundated,’ adds Fleming.

These poverty stricken areas that have gained notoriety for high levels of gang attacks, violent crime and HIV and TB prevalence.

GFJ’s medical ward sees three deaths a day while the casualty ward has to deal with between 7 000 and 8 000 patients a month. This is more than double that of other secondary hospitals where the figure is between 2000 and 3000.

‘It’s a volume issue,’ explains Dr Gio Perez, hospital manager at GFJ for the past two years. ‘We see the sickest of the sick and I guess the fact that we only get to see patients once they are half dead shows up the failure of patients to access the health system.’ On the other side of the trauma ward’s guarded steel mesh gate and a few hundred steps down the passage, the women’s medical ward represents another war zone.

Small bumps under the sheets are the only sign of life. Of the 44 beds, about 35 are occupied by HIV positive patients and here death is a daily reality. Three patients die every day in this ward alone, which is perhaps why so many Cape Town people refer to GF Jooste as ‘the hospital of death’.

While GFJ’s trauma surgeons are legends in their field, recording high success rates when dealing with gunshot and stab trauma, the battle is being lost in the medical wards.

Two Laurel and Hardy figures push an ancient trolley through the medical ward’s open doors, draw the curtains around those patients in view of the passage and drag a lifeless body wrapped in a white plastic sheet onto the trolley before pushing it down a long passage to the morgue. None of the nursing staff give the ritual a second glance. They have soiled beds and empty drip bags to attend to.

Five minutes later, one of the nurses wipes the plastic mattress down with disinfectant and prepares it for the next patient.

The nursing staff work their way across the ward, almost robot-like, unable to afford the patients the time for a chat or a show of empathy.

‘Our biggest challenge is extra hands,’ says Sister J, the only professional nurse on duty in the ward. She is assisted by one staff nurse and three auxiliary nurses. That translates into one nurse for every nine critically ill patients, and one professional nurse per 44 patients.

‘We have to do everything, feed the patients, wash them, run to the pharmacy for drugs,’ says Sister J. ‘But this epidemic is spiraling out of control, I can see it. The women are getting younger and younger and it’s hard to see people your age dying like this.’

For now, Dr Perez hopes that the new hospitals planned for Khayelitsha and Mitchells Plain will stem the tide of patients. Already, as is the case with other hospitals in the Western Cape, doctors are under pressure to release patients much earlier than is best.

‘If each doctor doesn’t discharge two to three patients every day, this hospital will collapse,’ says one doctor.

Perez confirms that the hospital is busy with an audit to assess how many patients in the medical ward are re-admissions. ‘My gut feel is that that this (early discharge) is happening to an unacceptable level,’ he confirms.

The Western Cape Health Department failed to answer any of the direct questions pertaining to the challenges it faces in terms of the referral system, nursing shortages and infrastructure.

Thinking out of the box

A study in neglect

Dr Paul Onek, director of health services in Gulu District, said supplies of malaria, tuberculosis (TB) and antiretroviral (ARV) drugs had all run out.
“We last received TB drugs in January for only 400 TB patients.” 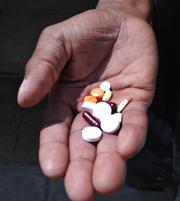 SAHR 2016: SA has not reduced deaths of children under the age of five since 2011 as we have failed to address “congenital disorders”.

As part of provinces’ quest to put their scarce health resources to the best use, provincial health management recently held a workshop with the World Health Organisation (WHO) to plan what personnel they will need in future.