A nation killing itself

25th August 2009 | Kerry Cullinan
A Cuban doctor once told me that South Africa's national sport was hurting one another. The chapter on violence and injuries, South Africa's second biggest killer after HIV/AIDS, is a chilling reminder of his comment.

A Cuban doctor once told me that South Africa’s national sport was hurting one another. The chapter on violence and injuries, South Africa’s second biggest killer after HIV/AIDS, is a chilling reminder of his comment.

Deaths from violence and injuries in South Africa are almost double the global average, while the death rate of South African women killed by their intimate partners is six times the world norm.

Some 3.5million people seek healthcare for injuries, half of which are caused by violence.

Young men aged 15 to 29 are the most affected, both as victims and perpetrators, with seven times as many men than women dying in homicides. The ‘Coloured’ population is also disproportionately affected by homicides.

Women were more likely to be killed by their male intimate partners than by strangers, especially those aged 14 to 44.

Alcohol features prominently in almost violent attacks. Some two-thirds of women murdered by their partners in the Western Cape had high alcohol rates in their blood, according to a study.

Child homicides are double those of other low income countries, with boys aged 10-14 most in danger of being killed.

More than 40% of men admitted to being physically violent towards their partners, while 88% of Soweto women reported either physically or psychological abuse by partners.

Although the murder rate in the country has been reduced, there has been little reduction in the rape rate and a random population-based sample found that over a quarter of men (27.6%) admitted to having committed rape. Most men first rape before the age of 20, and half of these will rape again. Up to 14% of men admit to taking part in gang rape.

In 2003 in Gauteng, one in 35 rape cases reported involved victims aged between one and three years old, while 40% were under the age of 18.

Almost four in 10 girls report experiencing sexual violence before the age of 18, and most of this is not reported to the police.

‘Girls exposed to sexual abuse as young children are at increased risk of being raped again in childhood and of experiencing intimate partner violence as adults,’ note authors Prof Mohammed Seedat and colleagues.

‘Boys who have been sexually abused in childhood are at risk of later becoming sexual abusers.’

In addition, many children witness violence, with 35 to 45% of children having seen their mother being beaten. Boys who witnessed this were more likely to beat their partners.

South Africa’s road traffic death rate is also nearly double the global rate, and this has steadily increased since 2003. In 2007, four out of 10 traffic deaths were of pedestrians and deaths usually peaked over weekends.

Again alcohol played a prominent role in traffic deaths, with over half dead pedestrians and almost half the drivers who killed them over the legal limit.

‘Alcohol misuse, and in some parts of the country drug misuse, are major factors underlying homicides, intimate partner violence, rape, abuse of children, road deaths and other unintentional injuries,’ note the authors.

They estimate the ‘health and social cost’ of alcohol misuse to be R9-billion a year.

Excessive speed was the main culprit in 30-50% of public passenger and heavy commercial accidents.

The social dynamics that support violence are widespread poverty, unemployment, and income inequality; patriarchal notions of masculinity that valourise toughness, risk-taking, and defence of honour; exposure to abuse in childhood and weak parenting; access to firearms; widespread alcohol misuse; and weaknesses in the mechanisms of law enforcement.

In addition, during apartheid there was very little common-law policing particularly in historically black areas and some properly crimes were justified as ‘redistribution of wealth’ and ‘in general, people resisted abiding by laws.. consequently lines between criminal and community were blurred and an ambiguity about enforcement emerged’.

Although there have been advances in development of services for victims of violence, innovation from non-governmental organisations, and evidence from research, the authors say that there has been a ‘conspicuous absence of government-promoted stewardship and leadership’.

The authors conclude: ‘The government should identify reduction in violence and injuries as a key goal and to develop and implement a comprehensive, national intersectoral, evidence-based action plan.’

The Eastern Cape’s latest health MEC appears to be set on preventing public scrutiny of its troubled provincial hospitals, and staff are too intimidated to speak out. In the meantime institutions are haemorrhaging nurses and doctors.

SOSHANGUVE – From outside, Leratong Old Age and Orphanage Centre in Block XX seems like an ordinary house, but inside thirteen pensioners are cared for 24 hours a day, seven days a week, with the aide of six caregivers. 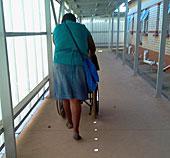 The burden of HIV on South African society has got the country asking the question: How can more people be encouraged to test for HIV? One school of thought is for the introduction of a routine opt-out model, while another is in favour of the current Voluntary Counselling and Testing option.