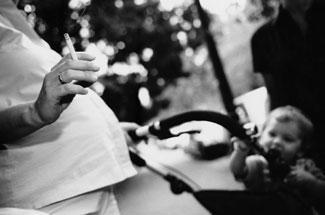 Women comprise about one-fifth of all smokers worldwide © WHO

One in five South African babies surveyed in two townships have the same levels of nicotine in their system as active smokers.

Recent research by the Drakenstein Child Health Study shows that infants are facing the consequences of high smoking rates among pregnant women, including the risk of being born underweight and developing lung problems like asthma.

Of the 1065 newborns that were checked for exposure to environmental tobacco smoke in the Drakenstein study, an alarming 18% had traces of nicotine in their systems equal to that of an active smoker. The researchers found that this reduced at six to 10 weeks of life to levels found in passive smokers: those in close proximity to people who smoke.

Smoking amongst pregnant women has been labeled by Dr. Nhlanhla Dlamini Chief Director for Child and School Health at the Department of Health, as an “emergency”.

“If you are talking to a childbearing woman about smoking, you tell them about getting lung cancer or you may get cancer of the throat, that is something that will happen in the future. When you are pregnant smoking is affecting you right now. It’s affecting the baby right now. It will cause the baby not to reach the full size it is supposed to,” she said speaking at the World Conference on Tobacco or Health which took place in Cape Town this month.

According to the study, exposure to smoke in the womb not only causes higher rates of early-life respiratory infections. It has also been associated with developing serious health issues in adulthood including chronic obstructive pulmonary disease.

The study followed a group of mothers in Paarl during their third trimester of pregnancy and infants in the first four-to-six weeks of life that were tested for early life smoke exposure. Participants came from the low socioeconomic communities of Mbekweni, a predominantly black township, and Newman, a predominantly coloured township. The study found that 325 (32 percent) of 1001 mothers who completed the antenatal assessment were active smokers and 446 (45 percent) were exposed to tobacco smoke. There was a significantly higher smoking prevalence in coloured mothers than in black African mothers.

One of the Drakenstein study researchers, Dr Aneesa Vanker, says while there have been other studies on the effects of antenatal smoke exposure in South Africa, theirs was the first on the continent focusing on the effects of toluene on unborn babies and infants.

“Toluene is a volatile organic compound. We found no other studies that showed that toluene was associated with respiratory tract infections. This was the first study to describe these effects.”

Early life exposure to toluene, a chemical found in cigarette smoke, was identified as a cause for lower respiratory tract illness, a leading cause of death in children under five, as well as wheezing in babies.

“Despite strict anti-tobacco smoking laws (bans on advertising and smoking in public places), smoking in homes is uncontrolled. Children are at high risk of being exposed to tobacco smoke from the time of pregnancy through early life. Further, there is very limited data on this in low, middle- income and African countries. Research in this area helps us understand the risk associated with diseases in later life,” said Vanker.

But exposure to pollutants in the environment is also taking a toll on children’s lungs.

The study found that socioeconomic factors including the use of fossil fuels for cooking in inadequately ventilated households, contribute towards higher rates of lower respiratory tract infections.

The reliance on fossil gasses for cooking was found to be higher among households in Mbekweni, which had a lower socioeconomic status than Newman.

Benzene levels exceeding acceptable standards were found in households that relied on the use of fossil fuels such as paraffin and coal for cooking and heating.

While the country is making a move to strengthen its anti-tobacco policies including upcoming regulations around plain-packaging and a proposed total ban on smoking in public spaces, Dlamini and Vanker agree smoking in pregnant women needs to be urgently tackled by public health education.

The research, which took place over three years, uncovered shocking levels of babies being exposed to environmental tobacco smoke. This is despite the fact that South Africa now has a 95% booking rate for antenatal care visits, according to Dlamini.

She said the country has doubled its average number of antenatal visits for pregnant women from four to nine since last year. These are spaces where women receive health advice warning against habits that are harmful to their babies’ health.

But she said this needed to be strengthened if infants were to see the benefits.

Dlamini said mothers tend to put the health of their babies above everything else and that public health officials have the power to drive anti-smoking messages to mothers in a consistent manner.

She said: “Even if you have all the money you need to buy cigarettes, if you are educated and know that smoking will harm yourself and also the baby, you are unlikely to continue smoking. They want the best for themselves and their babies. So that is our space. When we are in the clinics, it’s our space we are in control.”