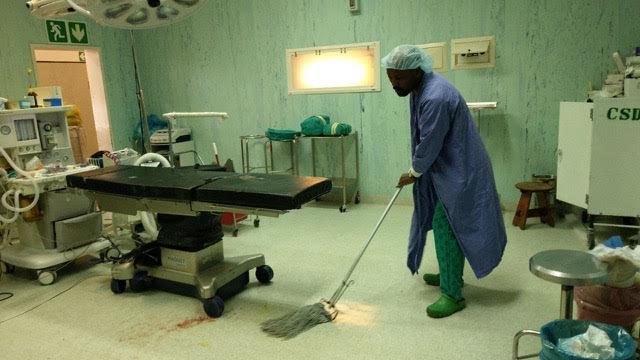 A doctor mops a Klerksdorp operating theatre as cleaners are all on strike. Photo supplied.

Tshepong Hospital in the North West is still being blocked by striking workers, but the situation at other provincial hospitals appears slightly calmer amid a large police presence.

Klerkdsorp Hospital is functioning, but doctors were cleaning operating theatres themselves as cleaners are part of the strike called by the National Education, Health and Allied Workers Union (Nehawu), according to sources.

Meanwhile, government’s Ministerial Task Team is expected to present its recommendations on the North West province unrest that has led to a breakdown in healthcare services to Cabinet on Wednesday. This follows a Friday visit by the team to the province after weeks of protests by health workers and some communities, demanding the resignation of Premier Supra Mahumapelo.

“The visit by the Ministers follows a series of engagements with the affected provincial departments by an advanced technical task team of national government officials. The visits by the officials were to establish the facts and make proposals regarding the state of governance in the province over and above the health sector,” said the government spokesperson Phumla Williams.

Last week doctors at provincial hospitals were prevented from entering health facilities by Nehawu members who have been on a strike since 26 February.

In Tshepong Hospital, police had to escort doctors to work after protesters started a fire at the entrance and blocked anyone from entering.

Later, after police had left, the protesting union members made their way into hospital wards and forced doctors out. In one incident, doctors who were performing a surgery begged the strikers to allow them to finish the case before the could vacate the building.

A doctor who spoke to Health-e on condition of anonymity said it was the first time she had witnessed striking health workers entering an operating theatre to threaten doctors.

“Usually what happened in the past is that, if there was a strike at the hospital, the protesters never used to come into the theatre. They would never go into the ICU  [Intensive Care Unit] because that is where the very sickest patients are. And they never go to the maternity section where new babies are. Those are usually the three areas that are protected. But now they have come into theatre,” she said.

North West Department of Health spokesperson Tebogo Lekgethwane told Health-e that the situation on Monday morning was calm and no reports of intimidation had been made at any of the hospitals.

Following last week’s violence, Lekgethwane says a case of intimidation had been opened against Nehawu members with local police station and that they have approached law enforcement agencies to assist with beefing up security at the health institutions.

He added said the department was aware of doctors and nurses being physically removed from wards but they were not aware of patients dying as a result of ambulances being prevented from entering hospitals.

“The one incident we are aware of is when an ambulance struggled to get through the roads in a local township due to barricades and protests in the roads,” said Lekgethwane. “The ambulance was going to fetch a patient who was injured during the protests. The patient was eventually retrieved but died at the hospital because it was too late when the ambulance arrived at the hospital.”

Human rights advocacy group Section27 said it was alarmed by the growing crisis, which had caused by the disruption of all levels of healthcare services.

The organisation says it has been receiving “desperate phone calls from anxious hospital doctors” reporting on the disruption of services caused by the protests and strikes led by Nehawu and other trade union organisations.

Section27’s Vuyokazi Gonyela said that while they stand in solidarity with workers on their demands for decent working conditions, they did not in support actions that undermine the rights of patients to access health.

“We cannot under any circumstances support protests which deny vulnerable and poor people access to healthcare and life-saving services. This causes great pain and suffering and loss of life for the most vulnerable, says Gonyela.

North West Health Department said negotiations with the striking health workers are still continuing, but that national government had taken over as the department had been placed under national administration in terms of Section 100 of the Constitution, because of alleged corruption and maladministration.

“Since the Department is now under Section 100, the administrator has been briefed. The National Health Minister has met Nehawu leadership and the Department is optimistic there will be a settlement soon,” said Lekgethwane.- Health-e.