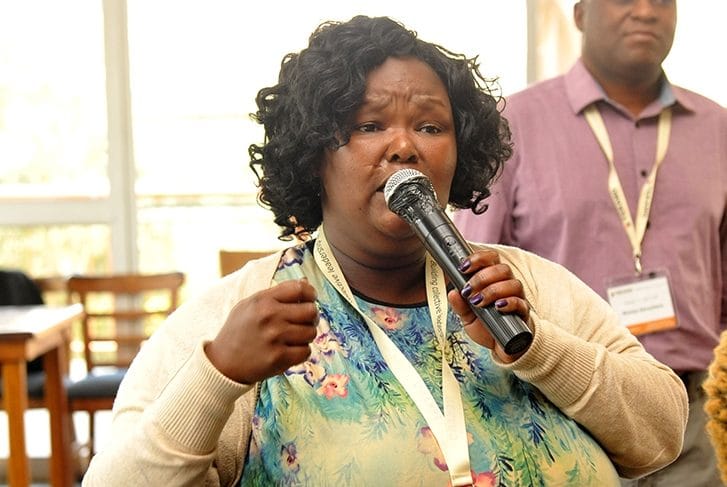 This women’s month, we speak to Dlamini on her activism, feminism and her goal to see the profession of sex work decriminalised.

Sex worker activist Dudu Dlamini’s (40) activism started from when she was very young.

“Back then I didn’t understand what being a feminist really way, but I was never really understanding being led by a man,” she says, reclining in a chair in Franschoek where she is participating in a Tekano fellowship meeting for which she was selected as one of the future health leaders of the country.

“I was in charge even though my brothers were older than me and I remember I was dishing up dinner and I said ‘no you are not going to get this meat, you will get this one because one of my other siblings did better in school or whatever it was that day,” she says.

Even she didn’t know the terms patriarchy or human rights she was already fighting for social justice in the decisions she made in her childhood home.

One of five children raised by her mother, a single parent, she grew up in an informal settlement near Durban. But, due to finances, she was unable to complete her high school education.

“I was having dreams for a better future and I know for a fact my mum was having dreams to see me, like all other mothers, to become a doctor or what what, but due to our very difficult circumstances it never happened like that,” she says.

She said that “fighting poverty” with the wish to provide for her own family, she is a mother of four, she moved to the Western Cape in search of better opportunities.

“That’s where I really got into the line of work that was not the very last option, but it was coming from very limited options: sex work,” she says.

In 2008 after surviving a particularly brutal experience of sexual violence, she met the Sex Workers Education and Advocacy Taskforce (SWEAT), a group supporting sex workers and lobbying for the full decriminalisation of the profession so that workers are able to access the human rights that they are currently denied in the current legal system.

“I got into this line of work not knowing that I will get the opportunity to show my true colours, who I am, and to prove to other people that I am powerful and the life that I live is a reality,” she says.

Through her years at SWEAT Dlamini has advocated relentlessly for the rights of sex workers and supported them through the many challenges they faced in her work, and consequently being appointed as the national organiser and mobiliser for Sisonke – a union for Sex Workers in the country.

She is also actively involved in a number of other movements working at all levels – from grass-roots to lobbying policy makers – to fight for not only sex worker rights, but the rights of all women and children in South Africa.

But dreams are relative, and although Dlamini is not a doctor, she is definitely changing the health status and the lives of many women and children in the country.

On July 25 Dlamini became the first person to win the Prudence Mabele Award, an endowment made in honour of the first black woman to publicly reveal her HIV status in South Africa, presented to her at the International AIDS Conference that was held in Amsterdam.

The International AIDS Society (IAS) created the prize, which has the highest monetary value of all awards at the conference, to bring international recognition to the remarkable work of gender justice and health equity activists.

Mothers for the Future

This award recognised Dlamini’s most ground-breaking and important work in the form of a project she set up in 2013 called Mothers for the Future.

“Through my work with sex workers it was where I found that they are mothers too and they love their children more than anything, and it is to help their children that they go to work,” she says.

“I felt I needed to bring support to something most people don’t realise: That sex workers are not only affected by their work or HIV but there are a lot of other issues they face.”

Besides the danger sex workers face every day, being harassed, arrested, raped and even killed she says they face a myriad of other challenges related to stigma and discrimination which make it difficult and sometimes impossible to be the mothers they want to be.

For example, there are next-to-no shelters available for sex workers who don’t have a permanent residence. Dlamini says shelters don’t allow women to sleep there during the day which bars sex workers who do most of their work at night.

Most crèches are only open during the day which prohibits sex workers from utilising these services for the same reasons.

Threat of losing their children

She says that nannies employed by sex workers often charge higher fees and blackmail them with the threat of calling social workers to remove their children.

“One of the sex workers we are working with was unable to return home the following morning as agreed with the nanny because she was arrested by police. The social worker took the children and we, and our human rights defenders, really had to fight to get those children back. We were lucky in this case because the social worker was progressive, but in most times that is not true,” she says.

“It’s a very painful. The space we create to talk to sex workers about their experiences about losing their children, the very children they are working for to feed and protect. They are experiencing trauma at every level of the system.”

According to Dlamini the criminalisation of sex work creates friction between them and their children, as well as their families. Because of their lack of legal status and the stigma associated with their work, they often hide what they do from their loved ones. Having to hide and lie from the people closest to them is painful and “takes away their dignity”.

“Decriminalising sex work will play a big role because it will bring back the dignity of the sex worker and also the dignity of their children. We will be able to exercise our human rights, be recognised by labour laws and access health services freely,” Dlamini explains.

Decriminalisation’s impact on mothers and children

“Sex workers will be able to disclose what they do with their children whenever they are ready and children will be able to feel how much their mothers really love them while being safe and protected while they work, unlike now when a mother leaves in the afternoon and comes back two days later without being able to tell them why,” she says.

She said criminalisation “silences” sex workers to respond to HIV, to get justice against rape and violence, silences them to be free “it silences them around absolutely everything”.

“In South Africa the constitution says that everyone has a right to choose their occupation, a right for safety and security, a right to eat and make decisions without being discriminated against – but where are all of these for sex workers? Nothing.”

She says decriminalisation won’t solve everything. It won’t solve poverty and unemployment but it “will save lives”, remembering the numerous sex workers who have been killed “while the murderers still walk free in our communities”.

Decriminalisation will go a long way to help “a mother to enjoy being a mother, a mother who sacrifices for her children”.

“If we reject these old laws and bring in human rights we will have a healthy sex worker, a healthy mother, a safe mother and a safe sex worker,” she says.

Dlamini hopes the award she received will galvanise action around her cause.

“To ignore the reality of what is happening to sex workers in our country it means we are not a progressive country. Because sex work is here. It is alive. It is supporting entire families – and decriminalisation is the most important step to take if we really say we are a country that protects the rights of all humans.”

Former Public Protector Advocate Thuli Madonsela told Health-e News this week that she supports the idea of decriminalisation of sex work and for the resources currently used to police sex work to be diverted to policing the sex trafficking of children “because then you will actually do a better job preventing harm”.

Said Madonsela: “I’ve met Dudu before and I’m encouraged by her and the many young people who are stepping up and leading without being given permission. So to Dudu, and every woman making a difference, I’m inspired by you.” – Health-e News

An edited version of this story was published by IOL.co.za and The Citizen