Young people make up about a third of the country’s population, but healthcare services are not designed for their needs.

SAHR 2019: The relationship between South Africa’s youth and healthcare

South Africa’s health system is at risk of leaving the youth behind as it moves towards universal health coverage, according to the country’s latest health review.

The 346-page document published by the Health Systems Trust explores problems and solutions in the public healthcare system that emerged from numerous sources and experts in 2019. This edition zoomed in on topics such as the National Health Insurance (NHI), universal health coverage, the health market inquiry as well as HIV funding.

Despite the youth accounting for a third of the country’s population, according to Statistics South Africa, healthcare services are not designed to cater to their needs, the research shows.

The report states that the public health system needs to strengthen in a variety of ways to meet the unique needs of young people. This includes defining and monitoring indicators of universal health coverage, as well as keeping track of the quality of services that young people receive from public facilities.

To achieve this, the research suggests increasing capacity of health workers to provide youth-friendly services.

A recent study found that less than half of HIV-positive teenagers between the ages of 15 and 19 are accessing treatment. Traditional methods of accessing treatment from healthcare facilities are a contributing factor in adolescents shying away from going to clinics to get medication.

The review also states that universal healthcare for young people at primary healthcare level should focus on screening and early detection of risk factors in order to avert long-term health consequences in adulthood. This early intervention is a step towards preventing and promoting healthy behaviours such as contraceptive access and use, which is likely to reduce morbidity and mortality among adolescents.

Despite adolescent and youth-friendly healthcare services being enshrined in the policy, the research found that there is no real evidence of the strategy being implemented in clinics. The report recommends a budget which provides ring-fence funding to improve adolescent health services. Ring-fence funding is money that has restrictions placed on its usage and can only be used for one specific purpose — which in this case is youth-centred healthcare services.

Adolescent girls and young women are one of the most vulnerable groups to HIV infection, according to the latest national HIV plan. About 2 000 young women between the ages of 15 and 25 are infected with the virus every week. This makes prevention of HIV in women and girls of this age group a priority.

The review focused on a study of 240 young women in Mpumalanga and KwaZulu Natal. The study found that some participants associated prevention with unintended pregnancy and were more likely to be proactive in taking the initiative to prevent pregnancy.

A number of the participants perceived negative HIV results as an indicator that they are doing well in averting the virus.

“Many had adopted HIV testing as a prevention strategy, characterising testing as more feasible and within their control than actual preventive behaviours such as condom use. Some also interpreted an HIV-negative test result as an indication that their approach to HIV prevention was already adequate, giving them a false sense of assurance and potentially reinforcing high-risk behaviours,” research reveals.

The study also found that these young women overestimated their ability to assess risk and would estimate how healthy a man is “by eye”.

Young women often engaged in high-risk behaviours because of factors such as lack of community and family support, the research shows. In some instances, those without support structures are not knowledgeable about relationships or HIV, and those who are knowledgeable, like local nurses, do not relate to them.

Experts recommend a five-stage approach towards decreasing risk behaviour amongst young women. This includes helping them create their own well-informed opinions on what good sexual practices are, using their experience to form their own rules for relationship and sexual health management, and being firm in their own rules around partners and sex lives. 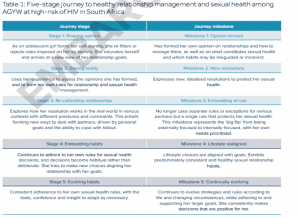 The researchers recommend that HIV prevention strategies should be aligned with relationship goals of girls and young women, and for communication around HIV prevention to be relatable and framed around how to balance relationships and sexual health.

The study further suggests that the language used to communicate with young women should not be HIV-centred but towards self-affirmation.

“Move away from HIV-related communication that focuses predominantly on ‘test and treat’ and primes a reactive rather than preventive strategy, and move toward more proactive, self-protective behaviours. Frame HIV testing as part of the prevention journey rather than as an endpoint.” – Health-e News