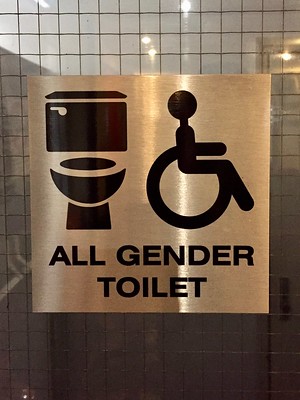 “This is another constraint to my freedom, my freedom of movement and freedom of expression,” says Antonio Abrahams*, a non-binary person, living in Cape Town.

Abrahams is referring to how gendered bathrooms inhibit their constitutional rights in South Africa as a non-binary person who does not identify with the cisgendered structure of bathroom facilities.

Gender neutral bathroom facilities can be used by anyone of any gender, as opposed to gender-segregated bathrooms, which are commonly found. The contestations to gender neutral bathrooms are transphobic, and usually come from people who believe in and benefit from “the cistem — the systematised power which oppresses, subjugates, and marginalises transgender people,” according to a 2017 journal article by queer rights activist, Nigel Patel, in the journal Agenda.

There are various motivations made for gender neutral bathrooms, but, as Abrahams states, safety and freedom of expression and movement are some of the most important issues it addresses. The simple act of going to the bathroom is turned into a difficult choice to make for gender-diverse people, and each choice brings its own set of potentially harmful consequences. Many transgender and gender non-conforming people battle with gender dysphoria. Dysphoria, as described in the Continuing Medical Journal, refers to “variable levels of mental distress associated with gender incongruence” and can be triggered by having to use a bathroom that does not fit your gender.

“There are obvious assumptions made, for example: ‘You look like this, so you must be that.’ I think that the importance of gender neutral bathrooms lies in the space where people don’t have to be like ‘Oh my god,  this is another category’,” says Abrahams. They then explained how they are constantly boxed into a gendered category because of their physical characteristics, but that those judgements do not correspond with their gender.

“Questioning yourself causes so much dysphoria and dysmorphia [feeling uncomfortable with your bodily appearance]. In the long run it provides better grounds for mental health, because you don’t have to constantly be questioning yourself, and asking questions like ‘Can I be here, should I be here?’ It’s all about the small wins, such as choosing to go to any bathroom at any particular time and it being okay,” they say.

Institutions such as University of Witwatersrand, and University of the Free State, have changed their signage on disability bathrooms that already have de-gendered stalls, to expressly be gender-neutral bathrooms. According to respondents in a study undertaken by Trans University Forum, this has led to concerns from (trans)gender diverse people that they are made overtly visible to their peers, and that they take away from disabled students using the bathrooms.

Also, many people believe that it would be dangerous for men and women to share the same bathroom, because of the levels of violence in our country. The call for gender neutral bathrooms is, usually, for a separate bathroom, however, this is not a unified position, and some LGBTQI+ individuals believe that the problem is with bathrooms having any signage at all.

Abrahams notes how the fear of violence from men influences the way in which debate on gender neutral bathrooms goes, and affects a range of people — whether gender diverse or not.

“I understand why bathrooms are separated, but it is making the problem of violent men ours. We now can’t have mixed bathrooms because men do things to women. But it is also a wrong assumption that men do not do things to other men as well.

Taking into account the various ways gender, race and class intersect in the bathroom cubicle is another aspect to the debate, and institutions providing gender neutral bathrooms in an otherwise hostile space to queer people does not solve the issue.

“South Africa’s colonial history mandates an activism that strives to bring into focus other interconnected identities, relating not solely to gender but also to class, race and disability. This necessitates a queer and decolonial approach, as captured by Kerryn in one of the interviews: ‘The toilets can be gender neutral but beyond that you need to create an inclusive space. It is not enough to just say or label your bathroom as gender neutral’,” notes Patel in their journal article.-Health-e News

*names have been changed