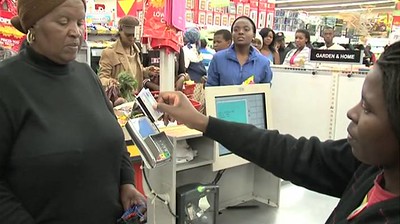 Taxi drivers, post office officials and social grant recipients have been adjusting to life in lockdown, with varying levels of success.

Since the government announcement that elderly and disabled social grant recipients are to receive their payouts at the end of March, grantees have been making their way to their local post office in numbers. Most of the people OurHealth spoke to in KZN were happy with their early payments.

Whilst some elderly relied on taxis, others used vans and private cars. Vans were almost full of elderly passengers, and private cars were carrying at least four people inside, a direct violation of the lockdown regulations governing how many people are allowed in a vehicle.

Pensioner Buyisile Makhanya says they hired a van because they “don’t have the strength as elderly people to stand in long queues for a taxi.”

She mentioned that her and her elderly neighbours always use this service when they receive their grants. When asked about the sanitation of the vehicle, she says that they are following the government’s Covid-19 regulations.

“The driver has tried by all means to do what the government has asked, and to sanitise us before and after we got out of the van,” she says.

The only vehicles that did follow the proper passenger protocol were taxis — which are only mandated to transport seven people at a time.

*Mabizo Cele, a taxi driver, said these are tough times for them and the taxi industry as a whole, because they are forced to only carry seven passengers. This comes at a financial loss to the drivers, who then drive faster to make up for the deficit.

“We do know that driving faster on the road might cause accidents, but what can we say? We want to make more money and still follow what we have been told,” he says.

He continues: “But, I don’t think this is going to help because these people don’t listen — they don’t practise social distancing in most shops and ATMs. The police, store managers, security, shop and bank assistants are tired of telling people what they already know — to maintain social distance in queues.”

Social distancing was observed to a tee in Hillcrest Post Office, with a healthy one metre distance between the queuing elderly. There was some coughing and sneezing, but people did cover their faces with scarves and masks.

A few social grant recipients were wearing gloves, but the post office officials were sanitizing everyone’s hands before they entered, before getting paid and on leaving the venue.

Thulani Mzolo, who was at the post office says that “coronavirus has encouraged neatness in people.”

“Who would have imagined that when you enter the post office there would be such kind people who help you stay clean by sanitizing your hands? Who would have thought that, even in stores, they do such? I hope this sanitation thing continues even after the lockdown, so that we can be safe from any germs,” says Mzolo. — Health-e News