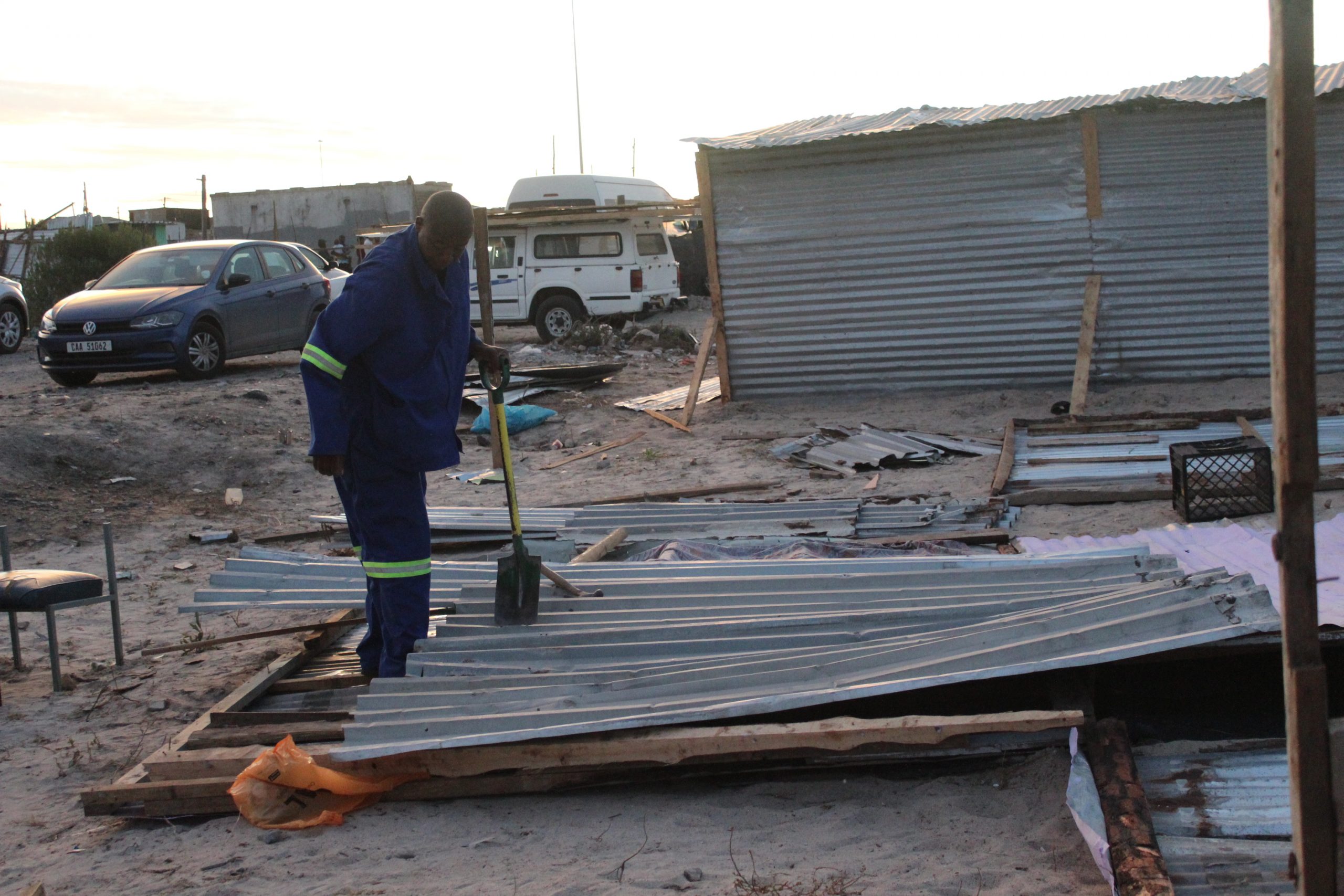 Residents of Empolweni, Khayelitsha faced a brutal eviction in the lead-up to Easter — and law centres and civil society groups alike strongly condemned the move from the City of Cape Town.

“All we need is a place where we can put our house up, and live freely,” says Ntembeko Moyeni, a resident whose home was demolished by the City of Cape Town’s Anti Land Invasion Unit last week.

The evictions took place in Empolweni, close to Makhaza — just before Easter weekend. According to the Legal Resource Centre and Ndifuna Ukwazi, the evictions fly in the face of the Disaster Management Act, and flout Justice and Correctional Services Minister, Ronald Lamola’s call that evictions be suspended during the country’s lockdown period. Both evicted residents and social justice organisations believe that the evictions increase people’s vulnerability to Covid-19.

Moyeni says that this section of Empolweni, close to Makhaza, was initially erected on 8 March, but that there were already residents building houses in the area.

“The first houses were already built opposite this area in September 2019 — we are just an expansion. We moved here because some of us can not afford rent anymore, and we don’t have work. We saw this space and decided to erect our shacks but for the second time in a row, law enforcement has destroyed our houses,” he says.

The area has no electricity and inadequate sanitation — with only one tap for the whole community, and no toilet facilities. According to houses a list that community leaders created, 82 houses were demolished. The contents of people’s houses — such as groceries, furniture and household items — were also destroyed by the Anti Land Invasion Unit.

“We were supposed to have a month here but law enforcement decided to bulldoze our homes,” adds Simphiwe Madikana, a community leader.

According to community members, law enforcement dragged a pregnant woman out of her house and pepper-sprayed her, and her family took her to Khayelitsha Hospital for her injuries.

The evicted residents came to live in Empolweni for various reasons, and some are on chronic medication. One of these residents is Nomathemba Gqomo, an elder in the community.

“We find ourselves being displaced and violated as women because of the way we’re being treated — we are treated like animals,” she says. Gqomo lives with five children and is on depression medication. She moved to Empolweni out of desperation as she was in an abusive marriage and had to find a place to live — but with little resources to her name.

According to Gqomo, she was verbally abused and mistreated by law enforcement, and her savings were stolen in February this year. She alleges that the Anti Land Invasion Unit also takes photographs of naked women, and hides their documents and nametags.

Empolweni has no nearby shops, and residents have to walk to Makhaza to buy essentials — and if spaza shops don’t have candles for them, they spend their night in the dark. Residents in the area were also on a community list — which their councillor gave to the government —  to receive food parcels during lockdown, but now that relief looks uncertain.

Mama Dywili is another elder in the community, whose house was bulldozed by the Anti Land Invasion Unit.

“Some people have to collect material to rebuild again, but no one knows what’s going to happen after that,” says Mama Dywili.

According to her, after her house was bulldozed, the unit told the community that they need to be indoors because of the national lockdown and that, by law, they can’t be outside.

The community needs blankets and other donations to help them out post-eviction. Equal Education and Ndifuna Ukwazi are currently collecting necessary items for Empolweni residents — including nappies, cooked meals and sanitary towels.

In a statement released by the City of Cape Town, they state that the operation was not an eviction but that “illegally erected and unoccupied structures” were being demolished.

“Some are taking the opportunity to illegally take land which does not belong to them or without the permission of the land owner during this time of national lockdown,” the statement, released by Malusi Booi, Mayoral Committee Member of Human Settlements Councillor, reads.   — Health-e News