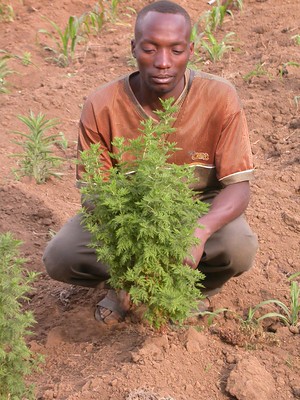 Despite creating vigorous debate, could traditional medicine be the key to finding a coronavirus cure? Writes Bibi-Aisha Wadvalla.

When Madagascar’s president Andry Rajoelina launched Covid-Organics last month – a therapy he claimed can cure Covid-19, despite no valid scientific evidence –  he sparked a larger conversation around the use of traditional medicine.

The liquid tonic is produced from an extract of Artemisia annua (sweet wormwood) and other indigenous herbs, according to the Malagasy Institute of Applied Research (IMRA), which developed the beverage.

A win for Africa and traditional systems?

Within the continent, some have praised the news as an African success story, affirming their belief in traditional knowledge. Several African nations, including Tanzania, Equatorial Guinea, Guinea-Bissau, Niger and the Congo Republic have ordered large consignments of the tonic.

In South Africa, “traditional medicines are important to a larger population“, says Dr Nox Makunga, professor of Medicinal Plant Biology at Stellenbosch University, adding “estimates suggest over 65% of the population are reliant on herbal, complementary and alternative medicines“.

Artemisia afra (African wormwood), known as umhlonyane or lengana is commonly used by traditional healers and in households to treat a wide range of ailments, from menstrual cramps and gastro-intestinal disorders to respiratory symptoms and asthma.

In a statement to Health-e News, the African National Healers Association (ANHA) says: “Umhlonyane is one of the most reliable herbs that’s been used for centuries without any side-effects.“ Although the organisation has not suggested any research, it says scientists may do so. “It would be advisable and recommended for this herb to be used as a remedy and preventative method against the coronavirus,” says Dr Zukiswa Mvoko, an indigenous healer representing ANHA.

Neither plant is new to allopathic medicine. There are numerous studies investigating the use of A.afra in treating cancer, diabetes, and heart diseases, while the most widely used antimalarial treatments are produced using the pure artemisinin compound extracted from A.annua.

The discovery of this compound in 1972 by the Chinese scientist Tu Youyou, a pioneer in traditional Chinese medicine, was deemed so important it led to her being awarded the Nobel Peace Prize in 2015.

Studies and tests are needed

The problem with Madagascar’s unproven remedy lies not with the use of plant-based medicine, but with the lack of scientific rigour. The World Health Organisation (WHO) has welcomed research into traditional medicines for Covid-19, provided they are “tested for efficacy and adverse side effects“. In a statement it says: “Africans deserve to use medicines tested to the same standards as people in the rest of the world.“

The National Academy of Medicine of Madagascar has cautioned: “It is a drug whose scientific evidence has not yet been established, and which risks damaging the health of the population, in particular that of children.”

Makunga stresses it’s important to be thorough in the research. “For any treatment to be taken up routinely, it needs to be standardised, safe, and effective and this information will be provided by doing research at different stages of development (in vitro, in vivo, double blind clinical trials).”

Both South Africa and The Africa Centres for Disease Control and Prevention (Africa CDC) are studying the scientific data and efficacy of Covid-Organics.

Rajoelina has dismissed all criticism for promoting the remedy, accusing the West of having a condescending attitude toward traditional African medicine.

“If it wasn’t Madagascar, and if it was a European country that had actually discovered this remedy, would there be so much doubt? I don’t think so,” he says.

He’s found an echo chamber on social media, where effusive African pride combined with a distrust of western science and the WHO in particular is gaining traction.

Mcebo Dlamini, a Fees Must Fall activist, lauded Madagascar on his Facebook page that has 58 000 followers. His post was shared 800 times to date, and the comments on his post and elsewhere on Facebook carried a similar theme:

“They thought they are in charge kante no, abaphanzi are in charge. We never needed anyone to come rescue us. They needed us. Africa must rise.”

“There’s no need to test this herb. It works.“

“The purpose of the World Health Organisation (WHO) is to sustain superiority of western medical systems.“

“So WHO is fooling who. It’s about time that the Western World should accept that we had our ancestors who passed on some traditional ways of treating ailments so no need for tests here.“

“The pharmaceutical companies wants to come with a mixture, turn it into pills and then somehow claim that they invented the cure. Blocking a black child’s victory.”

Since 1976, the WHO has recommended that “governments prioritise the incorporation of traditional health practitioners into health care, and legislate the use of proven herbal remedies“.

Makunga says post-apartheid South Africa has invested heavily in research of indigenous knowledge. “Contrary to social media, which has a their (Western medicine) vs us (African medicine) opinion, there isn’t a resistance from scientists to study herbal medicine.”

Nelson Mandela’s grandson, Ndaba Mandela, who has tested positive for Covid–19, has also lambasted Western medicine, crediting his recovery to herbal remedies, including umhlonyane. In an Instagram video he says: “Anyone talking about a vaccine can get out of here“, incorrectly conflating a vaccine with treatment. Vaccines, however, work to prevent and not treat disease.

Local entrepreneurs are cashing in, with lengana juices and other concoctions popping up as ‘cures’ or ‘immune boosters‘ as protection against Covid-19.

This type of narrative is worrying, says Sibusiso Biyela, a science communicator working on decolonising science, who argues that “people peddling the Malagasy potion are misusing the real issue of Afro-pessimism“.

He tells Health-e News: “By trying to make it a miracle cure, they are devaluing it and relegating traditional medicine to the realm of snake oil.”

Adding to Makunga’s view, he says, “By refusing the assessment that it’s not scientifically proven as a ‘Western’ standard, they are reinforcing the idea that the scientific method is ‘unAfrican’ when in fact, it’s global.” For Biyela, this binary stance is a setback to the decolonising science movement.

The IMRA is not the only institute researching how A.annua can potentially treat Covid-19. At the renowned Max Planck Institute, a science research organisation in Germany that’s won 18 Nobel prizes, Professor Peter Seeberger is collaborating with Danish scientists to test plant extracts and artemisinin derivatives against the new coronavirus. They’re building on studies in China that showed the alcoholic extract of sweet wormwood was the second most potent herbal medicine used on the 2005 Sars-CoV.

“Given the similarities between the two viruses, plant extracts and artemisinin derivatives need to be tested against the new coronavirus (Sars-CoV-2),” says Seeberger.

Speaking to Health-e News, he says the team is “very far along in the study, and are in the process of confirming the tests in independent laboratories.“

It’s unclear if the study has proven efficacy of A.annua extracts against Sars-CoV-2. Seeberger declined to give further information, only revealing the results will be released soon. “As scientists we rely on data and we will report our findings – active or not – once we have those data. At that time we will be making a recommendation whether this is a dead end or whether human clinical trials should follow,” he says. – Health-e News