Home » Flu vaccine elusive for some 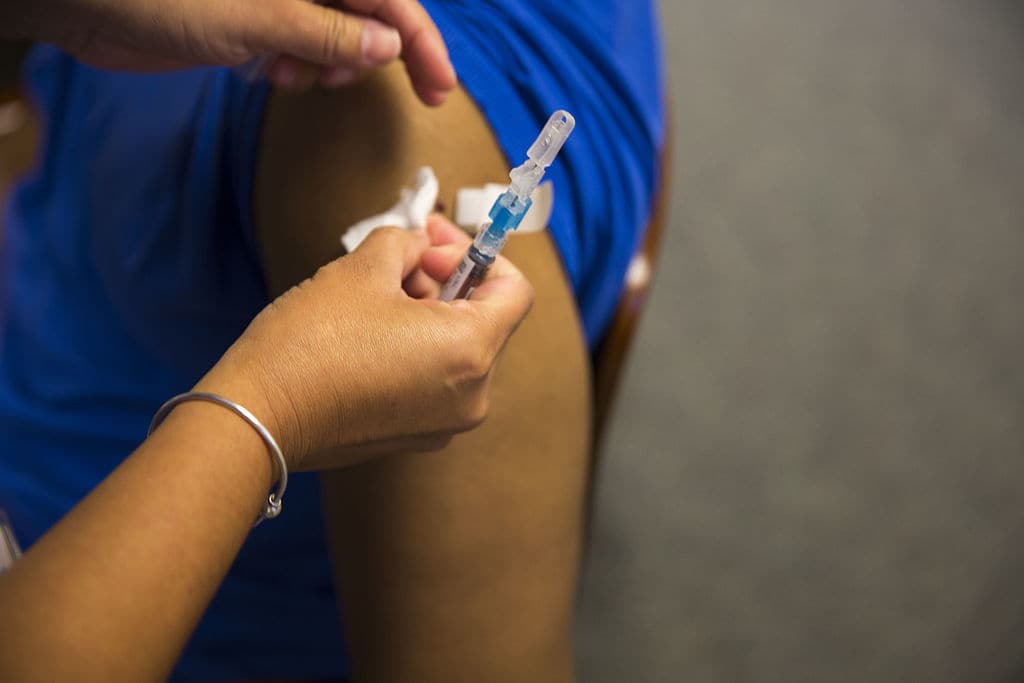 South Africans have been advised to get the flu shot to boost their immune systems against influenza.

With the flu season slowly creeping in, South Africans have been advised to get the flu shot to boost their immune systems against influenza and ease the upcoming winter flu burden.

Flu vaccine elusive for some

The advent of the Covid-19 pandemic has seen more people wanting to get vaccinated for the influenza virus also known as flu, as health experts have encouraged the country to get the flu jab to rule out the illness if cold and flu symptoms develop during winter.

Dr Sibongile Walaza, a medical epidemiologist at the National Institute for Communicable Diseases (NICD) tells Health-e News that “patients with influenza or Covid-19 present similar symptoms, therefore, it is difficult to distinguish between the two.”

“But, this does provide more reason to get your seasonal influenza vaccine,” she adds.

Pharmacy, health and beauty retailers such as Clicks, are rapidly running out of the flu shot due to the increase in demand, which leaves customers having to seek the jab elsewhere. Zanele Zama is one of those who have unsuccessfully shopped around for the flu vaccine at two of South Africa’s popular pharmacy retailers.

“I called the first one and they said I could just come in without making an appointment since a lot of people were just walking in without prior arrangements, but when I got to one of their stores, I was told that the vaccine wasn’t available. I then went to Clicks and it was the same. I have been going there for the past two months without any success,” Zama says.

Her gynaecologist recommended that she get the vaccine since she is pregnant. As someone who believes in the flu vaccine after taking a flu jab and not falling ill last flu season, she has tried to find a facility to administer it, but without luck.

“My gynae recommended that I get it immediately so that should I get sick, they can quickly eliminate flu, but being pregnant, the body takes some strain,” she says.

Unlike Zama, Thato Mayisela* does not want to get vaccinated for flu.

“I am not a fan of flu vaccines because last year I got vaccinated and got this horrible flu almost immediately afterwards”.

According to her, “the flu vaccine is more of a choice than a health requirement” and she has opted to boost her immune system with multivitamin supplements.

Nthabiseng Tsotetsi usually gets the flu shot in April but lockdown restrictions prevented her from getting the vaccine this year.

“I didn’t go this year because we normally get vaccinated around April and there were tight restrictions then,” says Tsotetsi.

She lives in Mpumalanga and her nearest pharmacy is about an hour away in Pretoria. But now she can’t go “because my daughter thinks she’ll get coronavirus if we step out the door,” she adds.

Speaking to Health-e News, Kwara Kekana, spokesperson for Gauteng’s Health MEC says that out of the 273 000 flu jab doses that were ordered, 235 953 have been administered. Around 37 047 of the remaining doses are still to be given to deserving target groups.

“The targeted groups are people living with HIV and AIDS, healthcare workers, people over the age of 65 and residents of old age homes, people with cardiovascular disease (including chronic heart disease, hypertension, stroke and diabetes) and lung disease (including asthma and chronic obstructive pulmonary disease),” Kekana explains.

Children aged six months to 18 years on long term aspirin therapy and immunosuppressants, and pregnant women are also a part of the targeted groups.

According to statistics released by the Gauteng Province Command Council (GPCC), 85 417 or 34% of patients with chronic conditions have received the flu shot, with 23% of the total population that has received the vaccine being from the Tshwane District. Twelve percent, or 29 368 of those who received the flu shot are staff members working at various healthcare facilities in the province.

“Over the years’ staff who fell into the targeted groups qualified for the influenza vaccine but when Covid-19 came into existence, a directive was received that said it was now mandatory for all healthcare workers to be immediately vaccinated against influenza,” says Kekana.

Influenza immunisations commence in March before the flu season starts in May-June but Kekana says that patients who have not yet been vaccinated, may still do so.

The chief commercial officer at Clicks, Rachel Wrigglesworth, says the retailer saw more than double the number of vaccines being administered at their various stores across the country.

“More than twice the number of vaccines has been administered compared to the previous year. The increase in demand at Clicks was unprecedented as a result of Covid-19 and people wanting to limit their chances of getting the flu,” says Wrigglesworth.

Besides the flu vaccine, the retailer saw an increased demand for immune boosting products such as multivitamins and supplements – mainly Vitamin C and Zinc. Wrigglesworth further adds that flu vaccines at all Clicks stores have been sold out.

According to the Centres for Disease Control and Prevention, people who may not get the flu vaccine are those with a history of severe allergic or hypersensitive reactions following receipt of any vaccine, a history of severe reaction to previous influenza vaccination, people who developed Guillain Barre syndrome (GBS) within six weeks of receiving an influenza vaccine and children under six months.