#COVID19 Patients allege they have been given expired food at Nasrec quarantine in Johannesburg.

Covid-19 patients quarantined at Nasrec Expo Centre in Johannesburg allege that the catering company has provided them with expired food, which they say, “makes their [health] situation worse.”

The government recommends a 14-day quarantine if one has potentially contracted Covid-19 through close contact with a confirmed Covid-19 case. But not all South Africans can easily isolate themselves, and so quarantine facilities, such as the Nasrec Expo Centre, fulfil this need for an estimated 500 residents.

Patients at quarantine sites are supplied with food within the site, and speaking to Health-e News, patients alleged that they were being served expired goods. Two separate incidences are believed to have happened on 25 June and 27 June.

A patient, who asked to remain anonymous, says that when he arrived at the facility, he had high hopes that it was the best place to be to defeat the virus.

“When I first arrived here, I saw nice beds and rooms, but I think I was wrong. My immune system is already at risk, eating expired food make the situation worse,” says *Sibongiseni Khumalo.

Pictures of the food, seen by Health-e News, shows that the meal expired on 23 June, although served to residents on 25 June.

“We called the chef to ask about this food – he took longer to come and when he arrived, he failed to give us valid reasons for this,” Khumalo explains tells Health-e News.

“Well, we can’t put blame on the nurses whose job it is to allocate wards to patients. The chefs should make sure that when there are leftovers that they don’t put them back in the fridge but dispose that food,” he adds. 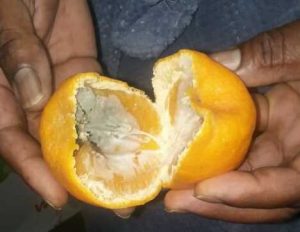 While the patients were worried about expired food, another patient was given rotten fruit – a mouldy nartjie – over the weekend.

According to unnamed patients at the facility, questions about the catering company are circulating after both instances of expired and rotten food being served.

“I believe that they should put notes on their food indicating that it should be disposed after a specific time, to make things easier to the nurses who serve us here,” Khumalo tells Health-e News.

Dodgy food is not the only concern patients have at the Nasrec Expo Centre quarantine facility – they also believe that their ablution facilities are not sanitised as regularly as is safe for Covid-19 patients. Patients say the toilets are only sanitised once, in the morning.

“There are 22 of us in one block and we share four toilet cubicles. The facilities are very busy – people are in and out – and the cleaning staff doesn’t sanitise them regularly,” explains *Nkululeko Dlamini.

Patients allege that a smaller hand sanitiser is used to sanitise the cubicles in the mornings, but they believe that in a quarantine facility, such as this one, bigger sanitisers should be used to kill the virus.

Health-e News took the matter to the Gauteng Department of Health to find out if the department is aware of the patients’ allegations, and to inquire about the catering process for the quarantine facility.

Kwara Kekana, spokesperson of the Gauteng health department explains that resident’s meals are prepared daily off-site and “are frozen and prepacked in disposable containers by the Emperors foods contract”. According to Kekana, food packages are labelled with a preparation date and expiry date, which averages a four-day grace period.

The second incident was not brought to the attention of management.

The health department maintains that meals which are served are not expired, as reported.

Kekana also disputed claims that the bathrooms are not cleaned regularly at the quarantine site, saying that cleaning services provide 24–hour assistance, with dedicated staff for the ablution areas.

“The toilets are cleaned at least three times day, as per guidelines, and service level agreement, defogging is performed twice per week,” Kekana notes. – Health-e News