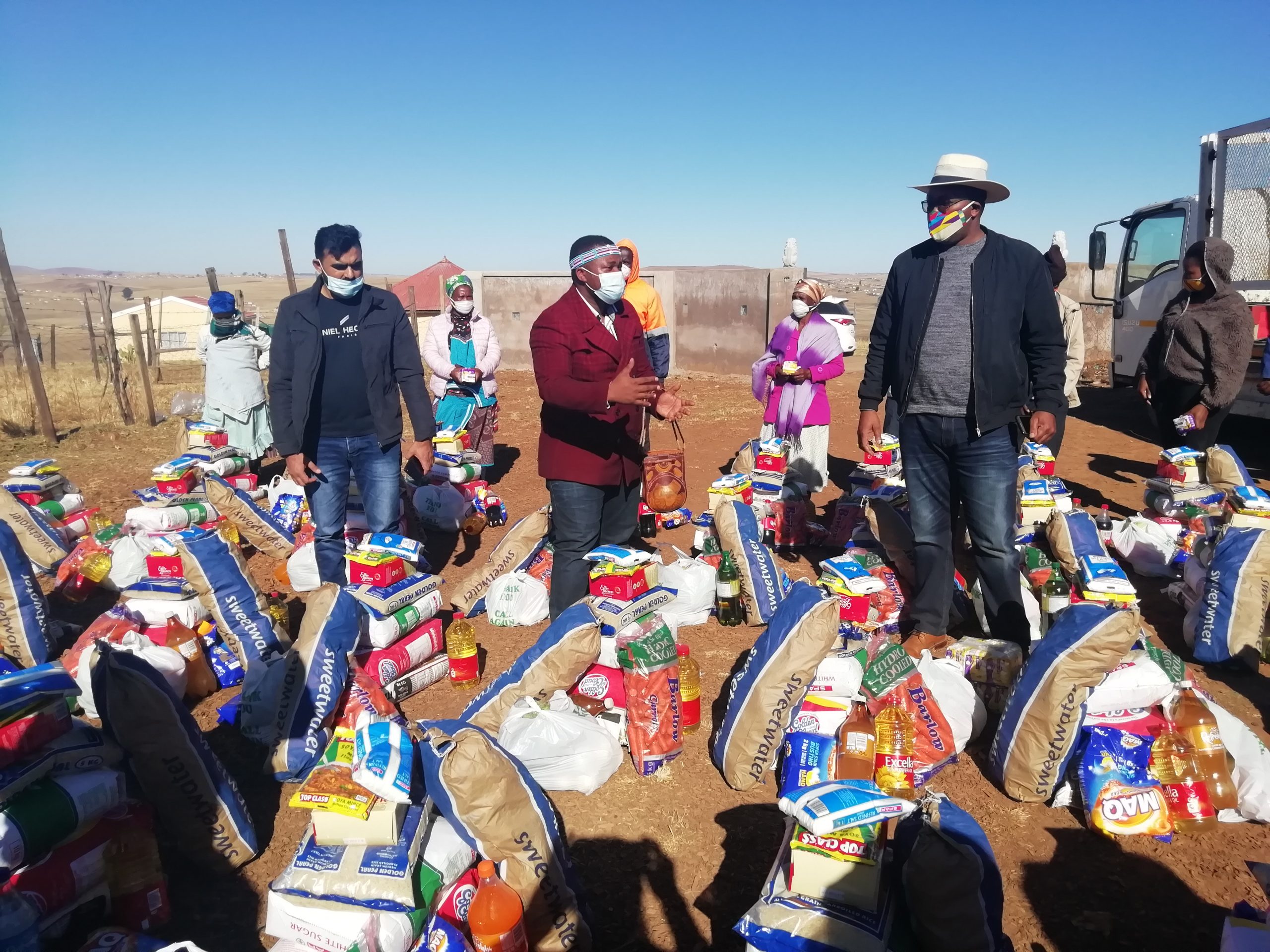 Elderly people with their warm blankets from their chief Bhungaliwile:Cred(Lindiwe Pakati/Health-e News)

Taking inspiration from Nelson Mandela’s life, traditional leaders and a local business owner band together to help those living below the poverty line in Mbholompo village, Eastern Cape.

Chief Mdalu has distributed more than 40 good quality blankets and groceries to the elderly and most vulnerable in his community. He says this initiative is part of celebrating Nelson Mandela’s legacy, which is about helping others.

“This initiative by was inspired by the month of July, which is also known as Mandela month. Also, it is inspired by the Covid–19 lockdown, and the colder temperatures. We have noticed that now the Eastern Cape is reaching its coronavirus peak,” he notes.

Programs in place to curb poverty

Chief Mdalu explains that the village has youth development programs which help increase the employment opportunities for young people in the area – but that it is not enough to sustain everyone’s livelihoods.

Xhabadiya, for instance, relied on one of her children’s income to run the household but since the national lockdown, her child was retrenched and so it has been difficult to survive day-to-day.

“Ever since the lockdown, the only child that was bringing food to my household was retrenched. Now everyone depended on my pension grant but today I’m happy because this means we will have more food,” she says.

She continued: “The chief made me feel special and appreciated. I am very happy because I will be warm and will also have food with my grandchildren.”

According to Chief Mdalu, the Mbholompo Wool Growers Association is one of the initiatives in that stimulates the local economy.

“Here at Mbholompo we started a farmer’s program, where the youth shears sheep and sells the wool. This helps create an income, rather than get involved in criminal activities,” he says.

He is “proud of the partnership” he’s made with other traditional leaders like Chief Jongisilo Pokwana ka Menziwa, and with local Mthatha business owner, Muhammad Saleem. Saleem is originally from Pakistan and owns Siyanda Hardware in Mthatha.

“When I went to buy blankets in his shop, he showed concern seeing the number of blankets I had bought. He asked what they were for and when I told him about the whole initiative Mr Muhammad donated more blankets and vegetables,“ says Chief Mdalu.

Speaking to Health-e News Saleem says that he was “really impressed by what the chief decided to do for his people.”

“I realised that most of us, as businessmen who are foreigners, we don’t get involved in things that affect our communities. When we are here in South Africa it means we are part of South African struggles,” Saleem explained.

Saleem also encouraged other businesses owners to do the same.

“By helping the people of this village, I wanted to say to other Pakistani businessmen: ‘Let’s help where we can and let’s be part of the communities that we are in’. From today I vouch to be part of Mbholompo village.”

‘Doing what we can’

Chief Jongisilo Pokwana ka Menziwa from KwaZangashe village in Engcobo tells Health-e News that he wanted to support his counterpart, as he has the same struggle within his area.

Chief Jongisilo, who is a cultural development strategist, oral historian, researcher and published author, is also the head of the Vusizwe Foundation, a community-led organisation which seeks to be “a vehicle through which we engage on social discourse, writing and research with a special focus on heritage, arts, culture and customary law.”

“Today I’m here to support chief Bhungaliwile and his people because his struggles are the same as mine. It is high time as traditional leaders we take the first step and not always expect to be handed things to our hands by government. Government has a lot on its plate – the little that we are able to do for our people, let’s do it,” he says.

He also spoke more about initiatives in his village – namely the Vusizwe Foundation, and its role in stimulating the economy and exploring artistic and cultural knowledges indigenous to the Eastern Cape.

“Back home in my village we have started a great organisation called Vusizwe Foundation. It is a vehicle to drive programs of the great place so we can go and ask for funding. What we are doing here with Chief Bhungaliwile is an extension of the mandate of that program. We are also trying to target other traditional leaders that we know of. We will make sure that the food parcels are given to the people,” says Chief Jongisilo.

He continues, saying that even though food insecurity is a big issue, another persistent struggle is access to water.

“One of our greatest struggles in all these villages is water, and water is very crucial, especially in the time of this Covid-19 pandemic. We teach our people to familiarise themselves with washing hands, but this cannot happen because of water scarcity,” he notes.

Chief Jongisilo also called on traditional leaders to work together with councillors to improve the livelihood of their people.