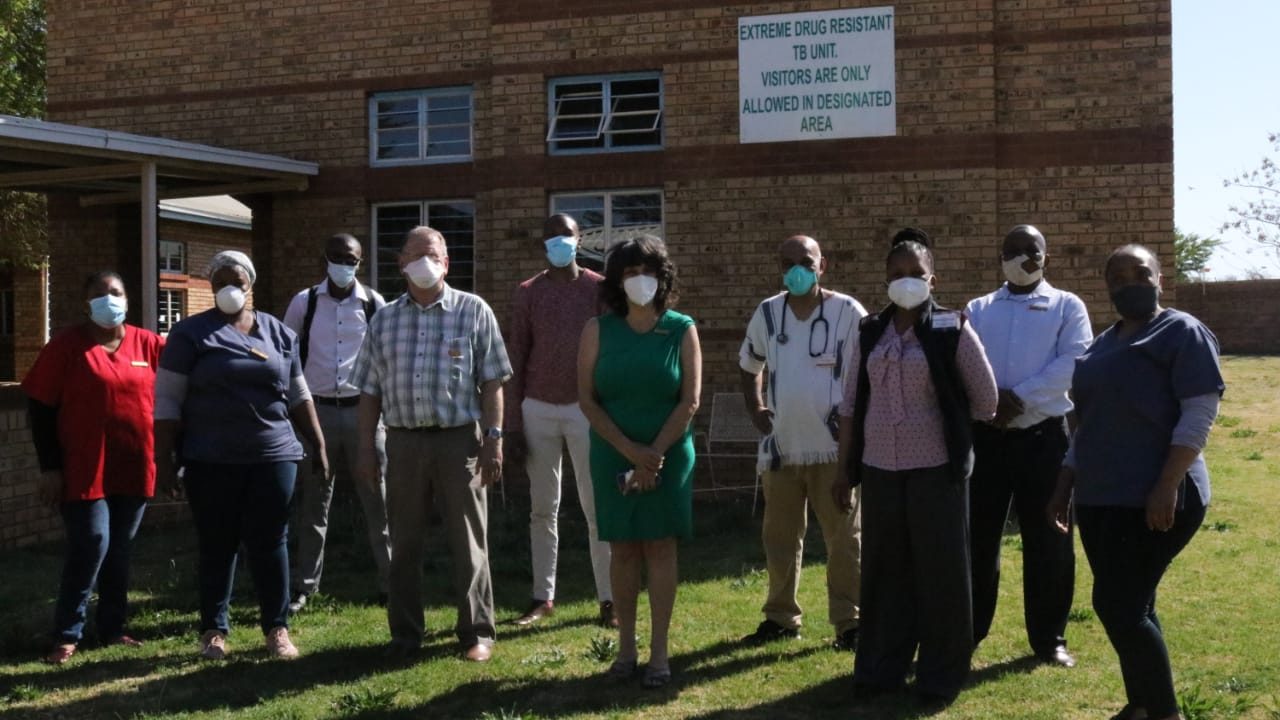 Staff outside the XDR unit at Tshepong Hospital (Ministry of Health)

After implementing a new form of treatment for drug resistant TB, Tshepong hospital has seen such high rates of success that patients numbers and community infections have dwindled.

The research and treatment of Extreme Drug Resistant Tuberculosis treatment has been so successful, that the XDR TB unit is empty at Tshepong hospital in Klerksdorp in the North West.

“Currently, the number of XDR TB patients in the province has dwindled and as a result, there is no longer a need for the unit at the moment,” says the hospital’s acting CEO Dr Mpho Dikhing-Mahole. “However, should the numbers of XDR TB or other fatal drug resistant forms increase this unit may be needed in future.”

A partnership between Chris Hani Baragwanath hospital’s Perinatal HIV Research Unit and the department of Internal Medicine at Tshepong Hospital led to new therapies for drug-resistant TB. The new drugs were so effective that not only do they treat XDR TB, but also Multi-Drug Resistant (MDR) TB.

“The success was made possible by combining other forms of TB treatment where new regimens could be constructed and new success levels of conversion and cure could be achieved, especially in XDR TB,” says Dr Hannetjie Ferreira head of MDR and XDR TB treatment at Tshepong Hospital.

The TB unit at the Tshepong hospital was the first in the country to use a new regimen under the Bedaquiline Clinical Access Research Programme in March 2013, according to Professor Ebrahim Variava, head of Internal Medicine at  the hospital. Regulators approved the use of the drug Bedaquiline in 2012.

Not only did this lead to an 81% success rate for XDR TB treatment within the first two years, community transmission also slowed. Before, the province recorded about 10 XDR TB and 30 to 40 pre-XDR cases.

“We have seen a steep decline over the past two years. In 2019, we diagnosed only two patients with XDR TB and so far this year no case has been reported,” says Prof. Variava.

The treatment also led to faster culture conversion, between 30 to 60 days, reducing hospitalisation. Before, doctors treated drug-resistant TB over two years with a painful injection. Fatality rights were also high.

“It also contributes to reducing infectiousness and thus community spread of the disease went down dramatically,” adds Prof. Variava.

Despite these gains, the Covid-19 pandemic has had a negative impact on TB diagnosis, says Prof. Variava. Individuals do not visit health facilities for fear of contracting Covid-19, while the public focus has shifted to the coronavirus. Prof Variava fears under-diagnosis may be occurring as the hospital has done few diagnostic tests compared to previous periods.

An accurate diagnosis of drug-resistant TB takes two hours, thanks to the Gene-Xpert test. Introduced in 2000, it cut  the waiting period for TB testing from six weeks. – Health-e News