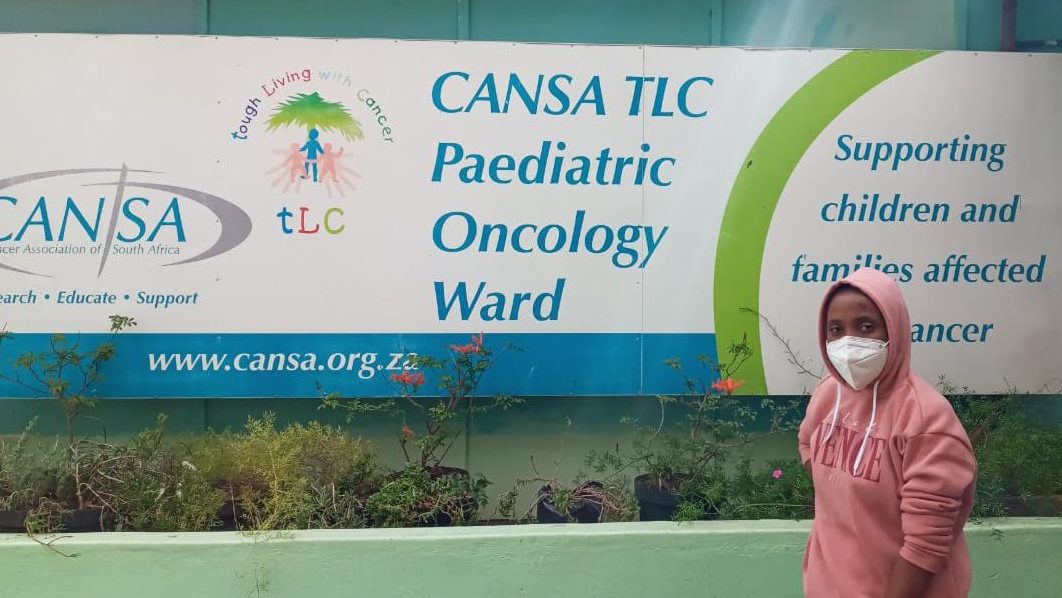 A mother determined to support her child as he battles cancer has moved into hospital. September is Childhood Cancer Awareness month, spotlighting the plight of children suffering from cancer and how their caregivers cope.

A mother is living at a hospital, taking care of her son as he fights cancer. Under the Covid-19 lockdown, she has not left the Limpopo Provincial Hospital for months, isolated from the rest of her family.

Rose Mogale’s son is receiving treatment in the hospital’s paediatric oncology ward in Limpopo. The 12-yer-old was diagnosed with Acute Lymphocytic Leukaemia in 2018. After 18 months in remission, he relapsed this year and returned to hospital for treatment.   The rest of Mogale’s family remains in Groblersdal in Sekhukhune, unable to visit due to lockdown regulations.

“My family and my two other sons are only able to see us through video calls. It is so painful that I cannot see nor spend time with my entire family,” says Mogale.

September is Childhood Cancer Awareness month, spotlighting the plight of children and parents like Mogale. Worldwide, over 300,000 children will develop cancer this year, according to the organisation World Childhood Cancer. Over half will never receive an accurate diagnosis or the treatment and pain relief they need.

“A lack of awareness and understanding of childhood cancer is a major barrier to diagnosis for many children,” says the organisation.

The World Health Organization says cancer is a leading cause of death for children and adolescents around the world. The most common forms are leukaemia’s, brain cancers, lymphomas and solid tumours, such as neuroblastoma and Wilms tumours.

Mogale’s son was first diagnosed when he started experiencing joint pain, swollen legs, loss of appetite, and nose bleeds. The family had no known history of cancer and never suspected that it could be the disease.

“Despite taking him to several doctors where various tests were conducted my son kept on getting worse as we struggled to figure out what was wrong. After several weeks of suffering from ill health, one doctor suggested that we do a bone marrow test,” recalls the 29-year-old mother. “They had done all the other tests and they could not figure out what was wrong. The [bone marrow] test came back positive and confirmed that he has cancer, which was the most painful thing I have ever heard.”

Acute Lymphocytic Leukaemia is a type of cancer of the blood and bone marrow that affects white blood cells. It is the most common childhood cancer which occurs when a bone marrow cell develops errors in its DNA.

“When we were first told that my son has cancer I was in denial as we had no history of cancer in the family. It was really had for me to accept it especially knowing how horrible cancer can be. The diagnoses really hit me hard as I had only seen people suffering from cancer only on TV and not in real life,” says Mogale.

Unemployed, Mogale cannot look for work while her son is ill. While she is grateful for his treatment, she worries about how much school he is missing. The boy was in grade five when he was diagnosed, and had to repeat the year after he could only attend one term. He is now in grade six, but is again missing school while in hospital.

For other parents supporting their children through cancer treatment, Mogale recommends a solid support structure. She is hopeful, even though she is alone with her son at the hospital.

“To parents who might currently be going through the same situation as mine, I am saying to them, be strong for the sake of the children,” she says. “Despite all the odds we are currently facing, I am determined to help my son fight this cancer and I will be beside him throughout his journey until he overcomes it.” – Health-e News