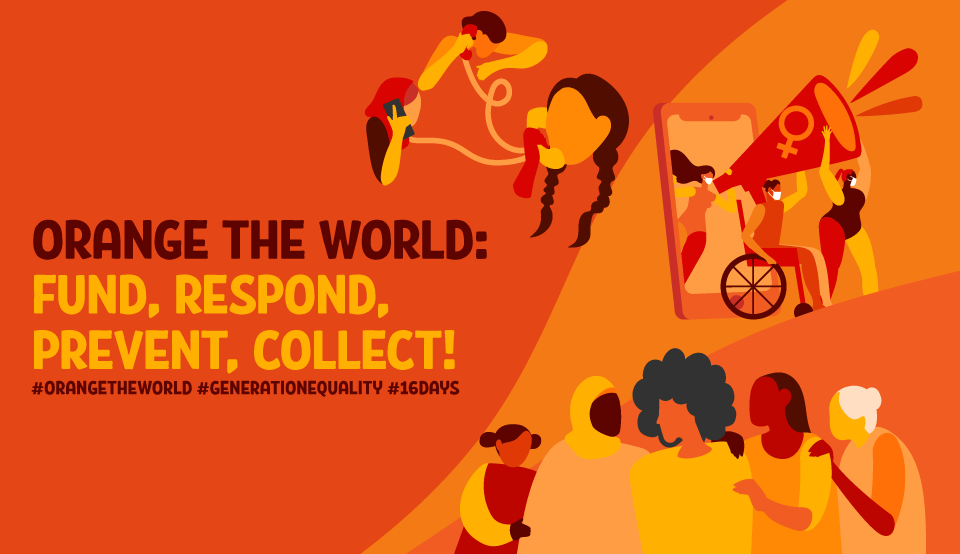 Global activities are planned to make the 16 Days of Activism against gender-based violence. This year the theme is ‘Orange the World: Fund, Respond, Prevent, Collect!’ Globally, one in three women experience physical or sexual violence, most often perpetrated by an intimate partner.

As the scourge of Covid-19 continues to sweep across the world, data published by the United Nations shows that all types of violence against women and girls have intensified.

The UN calls this a Shadow Pandemic and is calling for global action to halt the increased violence directed at women and children. Worryingly, the UN reports that Covid-19 cases have strained health services at the same time that domestic violence shelters and helplines reached capacity in many countries.

Emerging data also points to an increase in sexual harassment and other forms of violence, while resources are diverted to deal with the crisis of the pandemic. This “alarming” increase in violence has been in the form of physical, psychological, sexual and economic violence, the UN said.

With schools closed, and financial and food security increased due to economic hardship, girls and women are more vulnerable to exploitation and harassment. With lockdowns in various countries, survivors have also struggled to access support.

The UN said this year has been like no other, with at least 243 million women and girls abused by an intimate partner in the past 12 months. What’s worse, this figure is also not complete. The UN says that less than 40 percent of those experiencing GBV report it or seek help, meaning the actual numbers of those abused are much higher. UN Women’s Generation Equality campaign is also focusing on the funding gaps for various programmes that have emerged during the pandemic.

The UN Secretary-General’s UNiTE by 2030 to End Violence Against Women campaign will host a series of activities over the 16 Days of Activism, from 25 November to 10 December 2020. The global theme, ‘Orange the World: Fund, Respond, Prevent, Collect!’ The colour orange is meant to act as a global unifying symbol, decorating buildings and landmarks in orange, or having activists wear the colour to raise awareness about this issue.

In some parts of the world, calls to helplines have increased five-fold according to UN figures. While 135 countries have strengthened actions to address violence against women as part of their COVID-19 response, the UN said more must be done.

South African President Cyril Ramaphosa said curbing the scourge of gender-based violence will require an act of solidarity from every sector of society. Legislative and policy measures instituted by governments cannot alone rid the country of this problem.

The president made the call in his weekly newsletter on 23 November, saying NGOs and community workers are the closest to where people live and work.

“They are a barometer of implementation on the ground,” he said. “This country’s women and children, and indeed all the people of South Africa will forever remain grateful for the work of our robust, activist and principled civil society organisations and workers.”

[Read] Curbing the scourge of #GBV will require an act of solidarity from every sector of society as legislative and policy measures instituted by governments cannot alone rid us of this problem, says President @CyrilRamaphosa #16DaysOfActivism @DWYPD_ZA https://t.co/Z3FIMpvsbe pic.twitter.com/UtqBQ1IVBm

At the start of lockdown, activists warned that it could create a “perfect storm” for gender-based violence, urgently calling for increased support as part of the emergency measures. By Women’s month in August, South Africans had seen several high-profile incidents, again calling for urgent action.

During his televised national address in November, President Ramaphosa called for five days of mourning not just for those who succumbed to Covid-19, but also for those killed as a result of gender-based violence during this time.—Health-e News