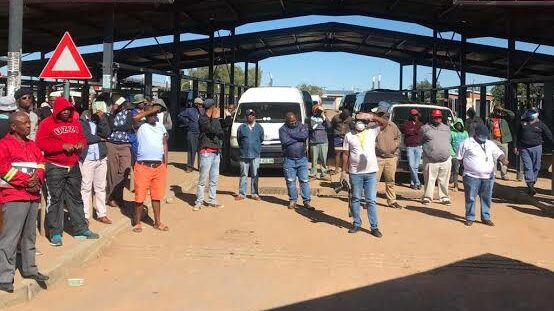 A provincial taxi rank in the North West (Health-e News)

With passengers set to increase dramatically during the festive season amid a second wave of Covid-19 infections, taxi drivers complain that the owners are not buying sanitisers or PPE.

The pandemic has already made life harder for taxi drivers. Yet, if they want to keep working,  drivers in the North West have to dig into their own profits to buy the legally required personal protective equipment (PPE).

A second wave of Covid-19 infections is sweeping over the country, just as South Africans prepare to travel for the festive season. Government has introduced stricter regulations this week, which require all make companies and business operators responsible for ensuring customers comply with regulations. That includes taxi drivers, who already earn low wages and lack support from their industry.

Drivers  ferrying passengers between Mahikeng and Itsoseng say they have to buy hand sanitisers from the profits they make. The last time they received any PPE from the provincial government was when the lock down began in March and April.

Speaking to Health-e News on condition of anonymity, one driver said he has to make a difficult choice.

“We have to take our last money to buy hand sanitisers for passengers. I am not making enough profit with this taxi,” he said. “Now I am using the money meant to buy food for my family to purchase hand sanitisers.”

Some taxi drivers have taken to increasing fares in order to afford the costs associated with purchasing sanitisers. These must fulfil the requirement containing least 70% alcohol.

“With the festive season roadblocks that are happening across the province, we also have to buy tyres and other parts to ensure that we comply with the law. This pandemic has placed a huge burden on us and we even fear for our own lives and personal well-being,” said the North West taxi driver.

He went on to say that as the holiday season begins, the number of commuters will likely increase. This could lead to a further spread of the virus.

The South African National Taxi Association announced recently that it would be conducting its own roadblocks in four key areas across to ensure compliance as taxis travel between inland provinces and the coast. These will be concentrated in KwaZulu-Natal for now, namely in Pietermaritzburg, Ladysmith, Empangeni and the R56 between Umzimkhulu and Umkomaas.

In Mahikeng, a queue marshall at the Itsoseng-Mahikeng taxi rank affectionately known as “Bibi” did not have any hand sanitiser available for passengers.

One passenger questioned Bibi on why he doesn’t have any of the crucial liquid at his bay. He responded that most people do not want to use it and carry their own.

Health-e News watched as some passengers took off their face masks as soon as the taxi took off. They complain that wearing a mask is too hot in the taxi with closed windows. Passengers have little choice but to close the windows as the taxi speeds up because they say the wind becomes unbearable.

This is even though Covid-19 regulations urge passengers to keep the windows open to ensure proper ventilation.  According to health experts, a taxi full of strangers seated close to each other is the perfect breeding ground for further transmission.

Meanwhile, spokesperson for the North West Department of Community Safety and Transport Alpheus Koonyaditse told Health-e News that all taxi associations received PPE. He added officials conducted a tour at most taxi ranks across the province to raise awareness on Covid-19.

On Monday, in a national address, President Cyril Ramaphosa urged public transport commuters to be vigilant as infections increase.

“Another factor in the rise in infections is increased travel. Many people do not observe prevention measures as they move within cities, towns and rural areas, and between different areas,” he said. “We have to recognise that the more we travel, the greater the potential for the spread of the virus. That means wearing a mask when you are in public transport and making sure that the windows are open at all times.”—Health-e News