Home » News Articles » #WorldTBDay: ‘I never thought that a person like me at such a young age could be diagnosed with TB’

Childhood and adolescent tuberculosis (TB) is common and often more difficult to diagnose and treat. Health-e News spoke to two TB survivors who had the disease while they were just 14 and 18 and about the special challenges having TB as a teen.

#WorldTBDay: ‘I never thought that a person like me at such a young age could be diagnosed with TB’

“Taking TB treatment and going to school at the same time was difficult,” said Blessing Mikateko Ngobeni, who was diagnosed with tuberculosis at 18. “Sometimes I would stop writing in the middle of class tests as I felt very tired.”

Fortunately, his teachers were very understanding, but Ngobeni never disclosed his illness to his teenaged peers, fearing the stigma.

Growing up in the Turfloop community outside Polokwane, Ngobeni did not know much about TB before his diagnosis in 2016, even though the condition is one of South Africa’s leading causes of death.

“I was diagnosed with pulmonary TB on the 6th of January in 2016 and at first I couldn’t believe the diagnoses. I was shocked but I eventually accepted because of the problems I had been experiencing for about a month,” said Ngobeni, now 23.

TB is caused by the bacterium mycobacterium tuberculosis. The most common form of the disease is pulmonary TB found in the lungs. However, it can sometimes spread from the lungs to attack other organs and is then called extra-pulmonary TB.

Ngobeni was diagnosed with Pulmonary TB at Maphutha Malatji Hospital in Phalaborwa, after almost a month of being sick, experiencing severe headaches, body aches, fever and a regular cough. Still, he never thought that as young as he was, he could have TB. At that time he was a learner about to start grade 11 at Majeje High School. He believed he had a strong immune system that could  fight off any virus or bacteria.

Rates of TB in children and adolescents 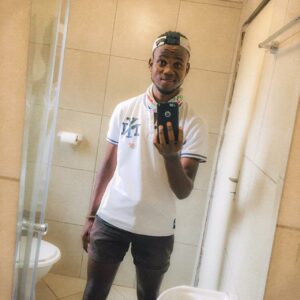 Blessing Mikateko Ngobeni when he learned he had TB (Supplied)

According to the latest Global TB Report by the World Health Organisation (WHO), in 2019 alone, “396 000 cases among children and adolescents aged 10–19 years were reported – equivalent to 10% of total notifications in these [95] countries [which provided data for the report].”

The WHO estimates that the true number of annual cases in children and adolescents to be closer to one million. In 2017,  233 000 children died from the disease.

Every year, 10 million people fall ill with TB, and despite it being a preventable and curable disease, 1.4 million people die from TB each year-making it the world’s top infectious disease killer after COVID-19.

Having TB left me ‘hopeless’

For 16-year-old Kineiloe Mofokeng being diagnosed with pulmonary TB when she was 14 left her “hopeless.”

“My friends don’t know that I collect the medication and have TB, I always lie and say it’s for my grandmother because I don’t want them to judge me,” she said, echoing Ngobeni’s fear of stigma.

“I experienced symptoms like coughing, I lost weight, night sweats and loss of appetite, I started experiencing shortness of breath and flu that didn’t want to get cured at home. That’s when my grandmother Mamojalefa Mofokeng took me to the clinic for tests and I found out that am suffering from pulmonary TB,” said the teenager, who lives in Bethlehem in the Free State

Mofokeng started taking medication only in 2019 and has been finding it difficult to remember taking her pills, a sign of strain on her mental health. She has gone through periods of stopping taking treatment and but is taking her treatment today with a different attitude.

“The feeling of going to the clinic makes me ashamed but what can I do? I’ve decided that, if I want to live, I will go,” said Mofokeng.

It is estimated that every year 1 million children under the age of 15 develop pulmonary TB (PTB). In this article, we share research findings from a team of researchers that included the DSI-NRF SARChI Chair in Paediatric Tuberculosis: https://t.co/28UAyXJPLm #WorldTBDay2021 pic.twitter.com/9EgLgndCbh

World TB Day and the impact of COVID-19

Each year, World TB Day is commemorated on 24 March to raise awareness about the devastating health, social and economic consequences of TB and to step up efforts to end the global TB epidemic. This year the theme of World TB Day 2021 is ‘The Clock is Ticking’.

The Stop TB Partnership published new data last week showing that there has been a drastic decline in diagnosis and treatment of TB infections in 2020 due to COVID-19 and its related lockdowns and impact on other health services. The partnership said COVID-19 has set the fight to end TB by 2035 back by an astounding 12 years.

According to the Stop TB Partnership, nine of the countries with the most TB cases, representing 60% of the global TB burden, saw a drastic decline in diagnosis and treatment of TB infections in 2020, ranging from 16%-48% (with an average of 33%).

South Africa falls within the top nine high TB burden countries and, according to the Partnership, the COVID-19 disruptions in the country led to a 40% reduction in TB notifications between March and September 2020.

Even before COVID-19 taking TB treatment was ‘difficult’

For Ngobeni, the road to being cured wasn’t easy and managing life and school in addition to taking the required six months of treatment was incredibly ‘difficult.’

“Life was very difficult at that time. I could barely do certain things such as school work. I could not walk properly sometimes as I always felt tired,” he said about the side effects of anti-TB medication.

“Overall, it was a very difficult stage of my life and I wished I could fast forward the treatment process but it was not possible,” he said.

TB patients becomes non-infectious shortly after taking treatment but Ngobeni did end up missing some school.

“I did miss some days of learning after being diagnosed with TB as I was told by my school to come back with a medical letter which states that my diagnosis will not affect other learners. Luckily one of the nurses from the hospital went and explained to the principal that I was in a good state to be amongst other people if I continue taking my treatment.”

He did, however, complete grade 11 successfully that year.

“Honestly TB treatment is difficult. The taste of the antibiotics is very sour and I was just forced to take them because I wanted to get well. But when the six months was over I was relieved.” – Health-e News