Community environmental organisations in Mpumalanga’s Highveld are seeking judicial intervention in their quest to reduce air polluting nitrogen dioxide emissions in the area.

In 2018, a report from non-governmental environmental organisation Greenpeace noted that decades of mining and the burning of coal has resulted in massive pollution. South Africa relies on coal for the majority of its electricity and primary energy production.

The Greenpeace report also found that Mpumalanga province was the global number one hotspot for air polluting nitrogen dioxide emissions in that year. The community environmental court case, known as the “Deadly Air” case, is founded on the violation of Section 24 of the Constitution, which declares that all citizens have the right to an environment that is not harmful to their health and well-being.

The poor air quality in the Mpumalanga Highveld was declared a high priority area under the Air Quality Act in 2007. But, environmental justice groups say that the government has not done enough to reduce emissions.

The virtual court case was heard from 17 to 19 May 2021. The applicants, the Mpumalanga Community Environmental Justice Organisation, Vukani Environmental Justice Movement in Action (VEJMA), and environmental justice group, groundWork have asked the court to declare the poor quality of air in the Highveld a failure on the part of the government’s air quality management plan prepared in 2011.

Although the #DeadlyAir court hearing is virtual, partner organisations and community members are protesting outside the Pretoria High Court today to show solidarity with the applicants.#DeadlyAir #CoalKills #EnforceTheLaw pic.twitter.com/o9hlH1mkfK

According to the United States Environmental Protection Agency nitrogen dioxide is “one of a group of highly reactive gases known as oxides of nitrogen or nitrogen oxides”.

Breathing air with high concentrations of nitrogen dioxide “can irritate airways in the human respiratory system” and “can aggravate respiratory diseases, particularly asthma, leading to respiratory symptoms (such as coughing, wheezing or difficulty breathing), hospital admissions and visits to emergency rooms”. Long term exposure can lead to the development of asthma and increases the risk of respiratory infections.

Twelve of Eskom’s coal-fired power stations, which produce most of its electricity, are located in the Highveld priority area. Two of Sasol’s plants are also located in the region: Its coal-to-liquids plant in Secunda and the NatRef refinery in Sasolburg.

An independent study attached to the court papers, conducted by air and health risk modelling expert Dr Andy Gray, found that these 14 facilities were responsible for the “lion’s share” of air pollution in the region in 2016.

Gray estimates that emissions from the 14 facilities mentioned above caused between 305 and 650 early deaths in and around the Highveld priority area in 2016.

As many as 2239 premature deaths annually can be attributed to air pollution from power plants in South Africa.

There have been reports from community members of persistent health problems, especially respiratory illnesses and complications.

Promise Mabilo, an activist from the VEJAM and a resident of Emalahleni, says they simply could not sit back and watch their neighbours suffer in silence.

“It’s so sad to see children using nebulizers. The saddest part out of all of this is that, when they go to the clinics or to seek help, they don’t find the care they need. Sometimes when you go to the clinic they will say they don’t have oxygen. People are dying, and it’s very sad to watch people dying slowly, without any help,” she explains.

Mabilo says during a door-to-door campaign, she observed the common suffering caused by the polluted air in the surrounding areas.

“Some parents were hiding their children because they think that they could be cursed due to their sicknesses. We have to explain to parents that it’s not their fault to have their children becoming sick like this. Living in Emalahleni is painful and it is not normal to live like this. My hope is that the Deadly Air court case will force government to take the serious action needed to reduce the harmful levels of air pollution and save the lives of people living in air quality priority areas in South Africa,” she says.

Emalahleni: The place of coal 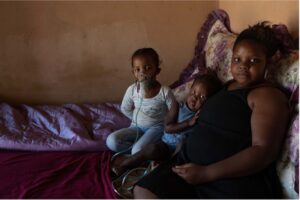 Mbali Vosmang sitting on the bed with her daughters in their home. Princess wears her oxygen mask. (Credit: Daylin Paul)

“Emalahleni” is the IsiZulu word for coal. It was aptly named after the abundant coal deposits in the area.

Mbali Vosmang is another resident to Emalahleni who says she has seen first hand the health effects of living in the coal mining area.

“I live with my  two children. Princess is seven, and Asemahle is three years old. When they were born, they were not sick but since living Emalahleni, we have become sick. It is very tough to sleep in hospitals due to COVID-19. The beds are full, and our children are put on oxygen tanks from the bench. The Deadly Air case is very important because I do not want others to continue to suffer the same issues as we do,” says Vosmang.

In another Mpumalanga mining town, Secunda, Sharon Mbonani says the polluted gases severely affected the health of her new born baby in 2018, and continue to affect pregnant mothers and infants in her area.

“I had a baby in 2018 and he seemed fine and one morning a month after he was born, he passed on. It’s unfair for any mother to lose their child because the government refuses to do the right thing. It’s painful. It is really unfair. It has to get better,” she says, adding that a doctor had told her that air pollution was to blame for her child’s death.

Rico Euripidou, the campaign Manager for groundWork, one of the applicants in the Deadly Air court case, says non compliance and failure to observe emission levels have led to the public health emergency in the area.

“South Africa is the most responsible for causing harmful emissions in Africa. There should be a system in place to carry the responsibility for our climate contribution from the 200 million tons of the massive amount of coal burned every year. We must be responsible for providing regions with equitable programmes to manage this, otherwise this makes South Africa the climate gangster of Africa. Climate justice is about redressing the impact of those responsible for it because it is always those who are less fortunate that are vulnerable to the health consequences,” he explains.

Euripidou says the poor communities living around the mining towns in the Mpumalanga Highveld bear the brunt of the failure to adequately manage the environmental issues.

“Many people living in the Highveld are very poor and live with no electricity in their homes because they can’t afford to. In order to keep themselves warm during the winter, they burn ‘imbaola’ [brazier], which emits smoke that results in air pollution in the home. Again, when they walk outside, they breathe air that is even more polluted. This means that the health of those with the least agency to access decent medical assistance suffers the most on a daily basis, although they contribute the least,” he says.

The applicants in the Deadly Air case want tighter regulation and monitoring of the companies that operate in these communities. Judgment has been reserved in the matter.

The Department of Mineral Resources did not respond to questions sent by Health-e News at the time of publication. – Health-e News