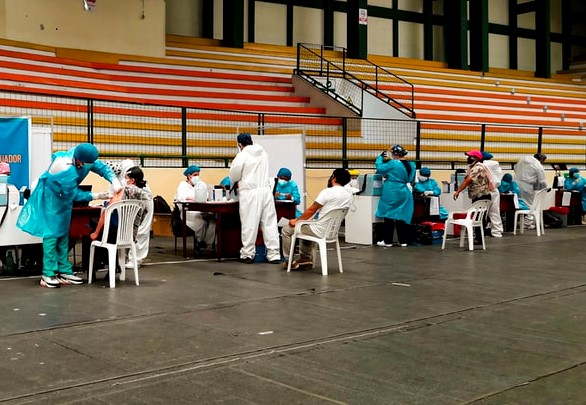 Slow turnout for vaccination (Photo by Pato Gonzalez on Unsplash)

KZN Health MEC urges senior citizens to get the jab

In a bid to encourage vaccination among senior citizens, the KZN provincial government is urging the elderly to present themselves without registering at vaccination sites, as many senior citizens have expressed fear about ID fraud and frustration at a lack of online access.

With South Africans over the age of 50 now eligible to register for Covid-19 vaccinations, Kwa-Zulu-Natal (KZN) Health MEC Nomagugu Simelane has urged people to sign up and get the jab at their nearest vaccination site.

Government announced at the beginning of July that its Electronic Vaccination Data System (EVDS) would officially open for registration of people over 50, with the vaccination program for this group scheduled to start on 15 July.

In the meantime, she also urged people of 60 and over to continue registering and getting vaccinated, and issued a directive to vaccination sites to take in senior citizens and register them onsite if they failed to do so beforehand.

This is as evidence emerged earlier this year that many senior citizens were not getting vaccinated in townships and rural areas of the KZN province. Some senior citizens have expressed reservations over the registration process, including fears about ID fraud and a lack of online access.

The EVDS had previously come under fire by various social groups for being an electronic system that is inaccessible to the working class and the poor, as well as the elderly who are not generally technology-savvy and often don’t have money to buy expensive data.

Some critics have argued that the system is a technocratic solution that also excludes many people from access to the correct information that they need to make an informed decision about vaccination.

This, in turn, is creating vaccine hesitancy at a time when the National Health Department is hoping to continue speeding up the pace of the rollout. South Africa is currently administering some 135 000 doses a day.

Health authorities are still hopeful of reaching the 200 000 mark soon and achieving President Cyril Ramaphosa’s target of 300 000 daily jabs by the end of August. However, with vaccine hesitancy estimated to be as high as 30% among some of the age groups and sectors that are eligible for the shot, it might take considerable time for the country to hit its targets.

South Africa has more than 465 active sites where COVID-19 shots are being dispensed, heavily concentrated in South Africa’s biggest cities. For those living in rural areas or reliant on public transport, this is yet another barrier.

In a bid to overcome this problem, it was announced on Monday that Gauteng and the Western Cape will now offer people eligible to vaccinate, transport to vaccine sites.

Gauteng government spokesperson, Thabo Masebe said mobile vaccination sites would start operating in Ekurhuleni, Tshwane and Johannesburg. It is hoped that the other provinces follow this example.

Issues aside, Simelane noted that getting vaccinated is the only way for South Africans to protect themselves against the pandemic. “We know that there are a lot of negative things being said about vaccines. So, we are pleading with our people not to listen to those negative narratives. We have all been vaccinated before against many viruses and those viruses are no longer in existence.”

She said that about 90% of educators have already been vaccinated at eDumbe alone and said that police officers will be vaccinated next. “We are pleading for everyone to support each other.”

The MEC also reminded locals that ceremonies and entertainment activities have been prohibited during the current level 4 lockdown as South Africa tries to curb the spread of COVID-19.

“Places of entertainment will eventually reopen and young people in particular will be able to go to entertainment venues. But it’s important that they remain cautious,” said Simelane.

The MEC also stressed the importance of people attending funerals to adhere to the limit number of 50, adding that mourners should rather pay their respects to grieving families via cellphones. – Health-e News