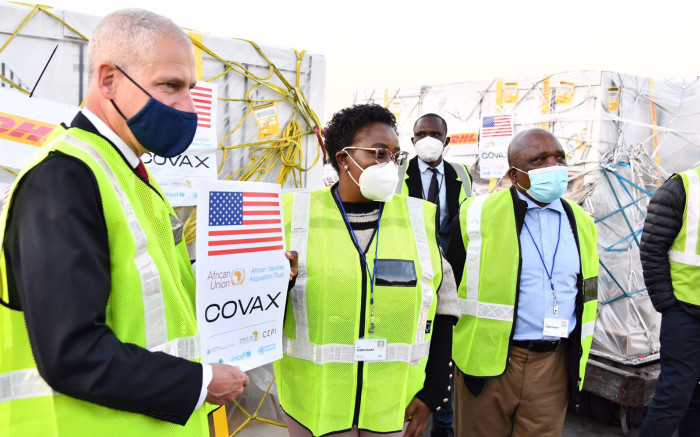 The first batch of COVID-19 Pfizer vaccine doses arrived in the country last Saturday. (Photo via Health Department on Twitter)

South Africa received a second batch of Pfizer vaccines from the US on Tuesday which is set to boost the country’s COVID-19 vaccination rollout even further. An initial consignment of 2.8 million doses arrived at OR Tambo International Airport last Saturday as donated by the US government.

The arrival was welcomed by acting Health Minister, Mmamoloko Kubayi, Deputy Minister, Dr Joe Phaahla, and the Chief of Mission at the US Embassy in South Africa, Todd Haskell.

This contribution comes timely for us as we prepare to move to younger age cohort of 18 in September. Today’s donation contributes to security of supply to meet the demands we have to reach our set milestones and vaccinate a majority of the population soon #VaccineRollOutSA pic.twitter.com/lC75JLGYEM

The collaboration between the African Vaccine Acquisition Trust (AVAT), COVAX, and the US government is part of an initiative with the African union to receive about 25 million vaccine doses to help vaccinate at least 60% of the African population.

Haskell said the US and South Africa have built one of the strongest bilateral health partnerships in the world which has allowed the two countries to fight the pandemic.

“On behalf of the American people, I am very proud that we are able to donate these vaccine doses to South Africa and have no doubt that the medicines will help save many lives,” said Haskell.

“Over the years, through programs such as PEPFA, our countries have been able to successfully work hand-in-hand since the very beginning of the pandemic to protect the health and safety of our citizens,” he added.

Haskell said South Africa could always count on the US as a friend and partner as the country bids to get its economy back on track.

Once the donation had been offloaded, US Under Secretary of State for Political Affairs, Victoria Nuland, visited the facility in Johannesburg where the vaccines are being stored.

“[We are here] to welcome and announce 5.6 million doses of Pfizer donated by the American people to the people of South Africa with no strings attached and we do this because as President Biden has said, none of us is safe till all of us are safe,” Nuland said.

Nuland was joined by deputy director-general at the National Department of Health, Dr Nicholas Crisp, who said that the country has the capacity to drive the vaccination rollout further with the donation from the US.

“We have managed to gear up our vaccination programme where we are currently able to do at least one million doses every three days, but we have not had the vaccines to enable us to get to that speed. We do have the capacity to do even better than that, and this donation is huge at a time when we are now able to move it into the community and vaccinate,” said Crisp.

Nuland added that the donation would help keep South Africans safe and strengthen the health partnership formed with the country.

“Now we are also getting into business with South Africa in the production of vaccines first for COVID-19 but also so we can be ready for the next pandemic that comes our way,” said Nuland.

She added: “The US and other international donor investments in Aspen Pharmacare can finish and fill vaccine vials and ideally this will over time not only make all South Africans safe but enable vaccinations all over the continent,” she said.