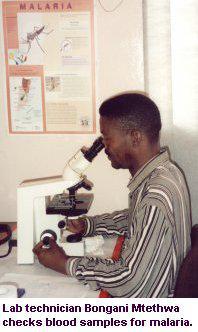 South Africa, Mozambique and Swaziland this week launched a R40-million, five-year programme aimed at controlling the spread of malaria. The control of malaria has also been complicated by the development of drug-resistant strains, forcing up the drug treatment costs. However, last year the World Health Organisation tested another drug in the Ndumo area that may be a useful addition to treatment options.

South Africa, Mozambique and Swaziland this week launched a R40-million, five-year programme aimed at controlling the spread of malaria.

This comes amid a malaria epidemic in northern KwaZulu-Natal that is threatening tourism in the region’s game reserves and beach resorts, and which doctors fear may spread as far south as Durban by early next year.

One of the worst hit areas of the country is Ndumo, which borders Mozambique and Swaziland.

On a visit to Ndumo’s clinic, the sister in charge, Siphiwe Ngwenya, said that her staff was battling to treat some 150 malaria cases every day.

It is very unusual for people to get malaria during winter in South Africa, but as the past winter was unusually warm and wet, the malaria-carrying Anopheles mosquito was able to carry on breeding instead of dying off.

In the first eight months of this year, Ndumo had already treated over 10 000 malaria cases, an increase of about 75 percent over the same time last year. Malaria cases have already been reported around Empangeni. Dr Harvey Williams from Mosvold Hospital, which administers the clinic, said that he believed “it is only a matter of time before cases are reported in Durban”.

Dr Ann Barnard, who had been sent from Mosvold Hospital to help the embattled clinic, said that of the 30 patients she had treated that morning, 27 had malaria.

“Staff morale at the clinic is low. Seven out of the nine nurses have had malaria. They are extremely unhappy and threatening to leave,” said Dr Andrew Ross, the superintendent of Mosvold.

The situation is thought be even worse in the Maputo province of Mozambique, where up to 40% of the population suffers from malaria each year.

The cornerstone of the tri-national anti-malaria programme will be the spraying of homesteads with a pesticide, synthetic pyrethroid.

Widespread spraying has already taken place in northern KwaZulu-Natal, with blanket spraying from Kosi Bay in the east to Ingwavuma in the west. Selective spraying of the worst affected areas has taken place further south.

BITTER PILL: A mother battles to get her child with malaria to swallow the bitter quinine

“The problem is that we spray the homes, but because of the heat people sit outside in the evenings. That is when they get bitten,” said Shaun Abrey, a field officer for the KwaZulu-Natal malaria control programme. He urged people either to stay indoors at dusk, or to wear protective clothing in the evenings.

The control of malaria has also been complicated by the development of drug-resistant strains of the disease. As a result, clinics have been forced to treat malaria with two drugs, quinine and Fansidar, which has pushed up costs.

However, last year the World Health Organisation tested another drug in the Ndumo area. “This may be a useful drug to add to the cocktail of drugs that we are developing,” said Dr Williams. “The advantage of the new drug is that it can be given as a suppository, which makes it easier to give to children and the very sick.” ‘ health-e.