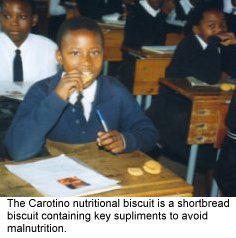 A new fortified cookie designed to suppliment micronutrients in school children is being launched in Durban today (22 March 2000). The carotino-nutritional biscuit is the product of four years of scientific tests. It was developed by the MRC to eliminate the widespread deficiency in vitamins A, E and iron which is essential for good mental and physical development in South African children.

A bite-sized solution to reduce malnutrition in South African children is being launched today (22 March 2000) in Durban by the Medical Research Council.

Despite school feeding schemes, the MRC has discovered that many children still have micronutrient deficiencies and are missing the key vitamins A, E and iron which are essential for growth and development.

The cookie, the carotino-nutritional biscuit, has been subjected to four years of scientific tests. The results of the research, published in the American Journal of Clinical Nutrition, prove that children eating the fortified cookies showed substantial health improvements.

Within 12 months, vitamin A deficiency was reduced from 40% to 12%, and anaemia was reduced from 27% to 13%, says Dr Spinnie BenadÃ© of the MRC. A year after the implementation of the biscuit, lower absenteeism rates and improved school performance were also clearly demonstrated by MRC researchers.

Micronutrient deficiencies, which are widespread in South Africa, affect the mental development and learning ability of schoolchildren. BenadÃ© points out that there is no point pumping money into the education system if children are still disadvantaged by malnutrition.

“The national figure for vitamin A deficiency is up to 30%. This means that one in every three children in primary school is deficient and in smaller children, it’s even worse,” says BenadÃ©.

The biscuit was developed after BenadÃ© received a letter from the headmaster of a school in Ndunakazi, rural Kwa-Zulu Natal, Michael Phungula.

Despite the fact that the school already had a feeding scheme and pupils received a cooked meal five days a week, the MRC’s researchers found that many children still had micronutrient deficiencies.

BenadÃ© decided on the novel idea of fortified biscuits because a biscuit is seen as a snack rather than a meal. A danger of school feeding is that parents may simply reduce the number of meals provided for children at home.

“Children love biscuits,” says BenadÃ©. “The streets are lined with street vendors selling biscuits with nothing but low-quality flour and sugar in them. This type of cheap biscuit is one of the fastest growing products available.”

The MRC’s carotino-nutritional biscuit, will also be cheap. It costs 50c (or R10 a month) to provide a child with three biscuits per day which would be enough to address the three main micronutrient deficiencies.

“To sell biscuits cheaply, they use hydrogenated fat. This contains trans fatty acids which have been implicated in growth retardation and cardiovascular disease.”

The secret ingredient in the new MRC biscuit is non-hydrogenated red palm fat which contains no trans fatty acids and is naturally rich in vitamins A and E.

“The biscuit contains only natural (non-synthetic) vitamins and also has no artificial preservatives or colouring. It tastes like any other shortbread biscuit,” says BenadÃ©.

BernadÃ© hopes to convince the Department of Health that unlike other fallacious claims regarding fortified foods, this biscuit really does eliminate micronutrient deficiencies.

“We cannot tell the government what to do. But we are hoping they will introduce it as part of the school feeding scheme, especially in the poor rural areas,” says BenadÃ©.

The carotino-nutritional biscuit will carry the MRC logo on it as a guarantee of quality. – Health-e News Service.