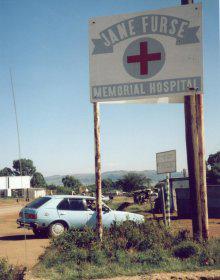 Dr Marcus Mumakwe’s wedding is giving the superintendent of Jane Furse Hospital a headache. Mumakwe wants two weeks’ leave but as he is one of only four doctors at a hospital that should have 13, this is a difficult request.

Jane Furse: a hospital in crisis

Dr Marcus Mumakwe’s wedding is giving the superintendent of Jane Furse Hospital a headache. Mumakwe wants two weeks’ leave but as he is one of only four doctors at a hospital that should have 13, this is a difficult request.

Superintendent Dr Muktadir Choudhury explains in a quick telephone call to his regional supervisor that it is impossible for him to deny Mumakwe’s request.

But Choudhury is worried. Already his doctors, one of whom is his wife, are working long hours and are on call every third day. With one less doctor, the load will be even heavier for the doctors who serve over 400 000 people from 105 villages.

Last year, eight doctors at the hospital performed over 1 800 operations, delivered 3 256 babies and saw over 40 000 outpatients. But three doctors took transfers at the end of last year, due mainly to work pressure and the isolation of Jane Furse. A fourth finished his community service and moved on.

There are no Cubans, no community service doctors, no specialists and no immediate prospects of relief for the hospital. Only one of the four doctors, Mumakwe, is South African. However, recruiting other foreign doctors has become more difficult, as the Health Professions Council of SA no longer recognises the qualifications of doctors from countries other than Britain, Ireland and Belgium.

The Northern Province’s health department has promised to assist the hospital to recruit more doctors, but little seems to be done about it.

Jack Tladi, director of the Health and Welfare Department in the Southern Region of the province, says there is a “very critical situation” at the hospital.

Tladi says no community doctors wanted to go to Jane Furse this year and no Cubans have been sent to his region for more than two years.

Choudhury, who comes from Bangladesh and has been at Jane Furse since 1995, says: “I fear that one day my wife and I will be the only doctors remaining here.”

He says he has tried to recruit doctors for all over “but it’s a chicken-and-egg situation because once they hear how few doctors we have here, they fear the workload so they don’t come”.

Besides, Choudhury has little time for administration work these days as he has to perform operations and take care of patients.

Mumakwe, who only sees his wife-to-be over weekends and holidays as she works in Witbank, agrees that the workload is heavy and tiring. “Every day, I must take care of two wards and then out patients. There are long queues so you don’t examine the patient properly.”

Nokuzola Mkosana, CEO of the health district served by the hospital, says she fears the doctors will soon be burnt out. “I have a fear they are going to resign. They feel the strain when they need to have a clear mind. Doctors will break down or they will go.”

“We are the poorest of the poor,” adds Mkosana. “We are in the poorest province and our southern region is the poorest area of the province. We need resources.”

Apart from a lack of doctors, the hospital buildings are falling down and Choudhury says the operating theatre is “so congested it is impossible to keep sterile”. After assessors ruled that only 40% of the hospital buildings were fit for use, the provincial government authorised that a new hospital to be built in 1996. But this has still not been completed.

“The first phase was supposed to have been finished by 1997. The outpatients’ department and maternity ward are nearly ready. But there are no access routes, there’s no gate or guard room. There is no paving around the building. There’s no water or electricity and no equipment,” said Mkosana.

Tladi says there has been a problem with the contractors, and that he has asked the public works department to investigate the matter “but I am unable to tell when the new hospital will be finished”. He added that the fist phase had cost R12-million, and that the province could not afford anything more at present.

The situation is worse in the 14 clinics that fall under Jane Furse, called the Ngwaritsi-Makhudu-Thanaga-Tubatse-Steelpoort (NMTTS) district.

Sister Sarah Malwa, who heads the hospital’s programme of Integrated Management of Childhood Diseases, says that nine of the clinics have no running water, five have no electricity and the radio phones between the hospital and clinics seldom work.

“We see 80 to 100 people every day, but there is no running water. There is not even a toilet,” says Sister Josephine Mogashoa, one of four nurses at Magnet Heights clinic. “We have even seen a snake coming out of that hole,” she says, indicating a gaping hole in the floor boards.

At Schoonoord Clinic, Sister Lesego Chuaka said although her clinic was supposed to be open 24 hours of the day, the province had cut off the telephone.

“They say they will reconnect it after the final year. But we don’t know when that is. If we have an emergency and want to phone for an ambulance, it is a real problem.”

Elika Moela, a patient at Schoonoord, said that while nurses did their best, the clinic was too small. “We can’t be free to speak private things,” she said, referring to the fact that nurses see up to four patients at a time in the same small room, while babies are delivered in an adjoining room.