Home » Nevirapine ‘ when will we decide? 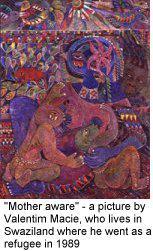 The Treatment Action Campaign (TAC) is heading for a showdown with the government if it does not approve the use of Nevirapine to prevent mother to child transmission of HIV. The question of giving Nevirapine to pregnant women is on the agenda for the next MINMEC meeting on August 12 when the Minister of Health, Dr Manto Tshabalala-Msimang is scheduled to meet with the provincial MECs for health.

The TAC said in a letter to the Minister of Health that if the government does not announce “the immediate implementation of the findings of the SAINT [South African Intrapartum Nevirapine Trials] study on a phased basis’¦by no later than 18th August 2000″, it will have no option but “to bring an immediate application for the universal provision of Nevirapine to all pregnant women with HIV”.

At the 13th International AIDS conference in Durban two weeks ago, South African researchers gave Nevirapine the thumbs up as far as safety and efficacy were concerned. However the ultimate decision rests with government – and with the Medicines Control Council (MCC), a statutory body that must approve all medication for use by the South African public.

“If it is in the public interest to register Nevirapine, we will do so,” said chairperson of the MCC Dr Helen Rees. “For instance, AZT has been registered for use for some time.”

She said that whether the MCC approved the drug or not had no direct bearing on government policy. It was up to government to decide whether to make the drug available or not.

Rees acknowledged that the MCC was fully aware of the urgency of the matter and was fast-tracking the review without compromising on standards or rigour.

She said the MCC had met the researchers who had conducted the SAINT study and had posed further questions for which they were awaiting answers. She said she could not disclose what those questions were.

“As the MCC, we have to answer critical questions in order to register any drug and to give accurate instruction about how it should be used. We are responsible for writing the package inserts about how the drug should be administered, its possible side effects and so on.”

Asked how soon the drug could be approved for registration, Rees said “in a matter of months”, depending on how quickly the researchers could analyse the data to satisfy the MCC.

“It’s important to realise that this drug is not in wide use. These results are hot off the press,” she said. “We are one of the first regulatory authorities in the world to be looking at the use of this drug for these indications.”

Rees said she was confident that the sample size for the trial had been big enough so that there was sufficient data from which to draw conclusions.

One of the researchers involved in the SAINT study, Dr James McIntyre of the Peri-Natal HIV Research Unit, said he believed there was sufficient information about Nevirapine to enable the Department of Health to make a policy decision.

At the Durban AIDS conference, the Department of Health said it was “very pleased” with the results announced by the SAINT researchers and re-iterated their position that it was committed to implementing “affordable, safe and sustainable interventions to reduce mother-to-child transmission”.

However, the department raised concerns about possible resistance developing in patients who used the drug and wanted the researchers in the SAINT study to answer this question. Doctors in favour of using Nevirapine have pointed out that resistance is not an issue with such a simple regimen.

When presenting the SAINT findings to the Durban AIDS conference, Dr Diane Moodley from King Edward Hospital said the message was “very simple”. She said that by providing women with a single dose of Nevirapine “we can reduce at least one third of mother-to-child transmission”.

The health department has made it clear that the cost of Nevirapine (which is considerably cheaper and easier to administer than AZT) is not a problem. In addition, the manufacturer of the drug, Boehringer-Ingelheim, has offered to supply Nevirapine free of charge to the South African government for the next five years. No decision has been made regarding this offer. ‘ Health-e News Service