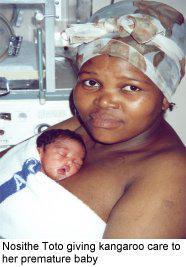 The Western Cape department of health is introducing “kangaroo care” as the preferred method of treating premature and other low-birth weight babies after research at Tygerberg Hospital showed the method reduced infant mortality and saved the hospital R1-million a year.

The national Department of Heath is also considering the adoption of the policy country-wide.

Kangaroo care — where the infant is kept upright between its mothers’ breasts at all times for warmth and unlimited breastfeeding — greatly increases the chances of survival of low-birth weight infants. It also cuts hospital costs substantially, according to research conducted by Professor Gert Kirsten of the Department of Paediatrics and Child Health at the University of Stellenbosch..

South Africa has six times the number of very low birth weight babies than developed countries, according to Kirsten, who also heads the Kangaroo Care Unit at Tygerberg Hospital.

Kirsten says this can largely be attributed to the fact that coloured infants are genetically much smaller than white or black babies and are often born below “normal” birth-weight.

However, smoking , alcohol and hypertension, all problems in the province, also influence foetal growth, says Kirsten.

“We are the first province to adopt this policy,” says Fawzia Desai, provincial Director of Maternal and Child Health. “We plan to establish kangaroo mother care as the preferred method of care at all levels of the health care system, through-out the province.”

Low-birth weight infants who must stay in hospital for nursing care are usually separated from their mothers and formula-fed. These babies need to be kept in incubators to maintain their body warmth.

By comparison, kangaroo care involves almost constant skin-to-skin contact between mother and infant which is as effective as incubator care for warming infants once life-support is no longer necessary.

“By keeping her baby between her breasts, a mother can perform the function of an incubator. This means she can take her baby home sooner,” says Kirsten.

Since skin-to-skin contact means that mother and infant must be kept together, Kirsten says it makes sense to take kangaroo care one step further, and replace formula-feeding with breast-feeding.

This is better for the babies as gut-infection is nine times more likely in formula-fed than in breast-fed low-birth weight infants.

“For years, premature babies were tube-fed until 34 weeks and then bottle-fed. We were inundated with sick babies with gut infections.”

We began an aggressive breast-feeding programme and now we’ve managed to turn this around. This makes a big difference. We can give the ventilators and the intensive care unit to other babies now,” says Kirsten.

Kangaroo care has also shortened babies’ stay in Tygerberg Hospital by five days, from 23 to 18 days.

“We worked out that we were saving R1-million a year, just at our hospital, at the very least,” says Kirsten.

Because mothers are involved in looking after their children, the workload on health care workers is also decreased.

Although mothers from outlying areas need to be accommodated at hospitals and clinics, Kirsten’s research shows that these accommodation costs are still cost-effective when compared to the cost of employing more nurses.

It is also good for the mother to be part of the team caring for the child.

“Before it was the nurse’s child. Now, it’s the mother’s child, which is how it should be,” says Desai.

And apart from improved growth and health, advantages for the infant are also a more restful state and less anxiety and distress, adds Desai.

Low-birth weight babies will be able to return home much sooner if their mothers practice kangaroo care. But for the policy to be implemented successfully, communities will have to accept that low-birth weight babies need to be carried upright between their mothers’ breasts inside her clothing at all times. Fathers and others can also provide this kind of skin-to-skin contact. ‘ Health-e News Service.