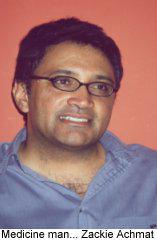 Treatment Action Campaign chairperson Zackie Achmat has been both condemned and praised for smuggling cheap medicines into the country as part of his organisation’s challenge to drug companies. ANSO THOM tries to find the person behind the controversy.

After interviewing Zackie Achmat for over two hours, you are left with a sense of only having scratched the surface. There is no doubt that the chairperson of the Treatment Action Campaign has many more elements to him than the more widely known facts ‘ aside from being openly gay, HIV-positive, and an activist (although he hates being called an activist), he is also an ex-prisoner, aspiring novelist, writer, rebel, humanitarian, radical and intensely private, in spite of his public profile.

But despite all the “tags” Achmat is probably best known for the work he has done to try and bring affordable and accessible treatment to the millions of South Africans living with HIV/AIDS.

But his latest work is just one piece of the jigsaw.

Now 38 years old, Achmat was 14 during the 1976 student uprising that left many school children shot dead by the police.

Achmat, a schoolboy at Salt River High, and two friends decided to pledge their solidarity with the African children up north by burning down their school.

“It think it was the horror of what happened and how kids were shot down’¦it made me aware of the system of power, not simply the inequalities which I think is around us all the time.”

Two weeks later, Achmat was arrested for the first time when he organised a demonstration. “It was the day [Prime Minister John] Vorster met [US Secretary of State Henry] Kissinger.

“I had been grabbed and beaten up by the cops before, but that was the first time I was properly arrested and beaten. It was horrible, but our lawyer was Dullah Omar and I think from him I learnt a lot about politics and law. That’s where I learnt that one can use law to defend people even in the worst circumstances possible.”

Following that first arrest in 1976, Achmat was arrested several times after that for leading children in demonstrations and organising school boycotts. He was plunged into the “craziness” of that era and didn’t complete his matric.

Achmat says he was drawn to politics by personal experiences: “I think it was definitely for me the consequence of family violence and seeing inequity in relationships in the family.

“It’s experiencing those things and taking the whole context together of poverty and my mom’s illness, my dad’s shenanigans before he became responsible — he only became responsible after 40, so I hope there is still hope for me,” Achmat quips.

“Although I never regret the actions that I took, if there’d been better political guidance, better organisation at the time, I doubt whether I would have considered burning my school down as the appropriate action .”

He also believes that the fact that he is gay has tested his understanding of what equality means. This, in turn, led him to becoming active in gay and lesbian politics.

“I wasn’t ever in the closet, but I didn’t ram my sexual orientation down people’s throats and I still think, if there is one thing the gay and lesbian coalition taught me, is you fight for the equality of those people you don’t like. That you have to fight for the equality of even the most die-hard anti-Semite and Christian or Muslim or Hindu or Jewish fundamentalist. I would fight for their rights and I think that is an important realisation.”

And the rights of people living with HIV/AIDS? “Personally my own understanding of HIV was always ridiculous, I had the President’s (Thabo Mbeki’s) position before and that’s probably what led me to become infected.

“I couldn’t believe that you could have a convenient disease which kills fags, prostitutes and blacks. And how on earth do you get a disease that is so selective?

“I thought it was a CIA conspiracy, you know, or’¦propaganda.

“I’m absolutely serious ‘¦and if you’re like me’¦a kid who was a sex worker at one stage, a fag and black then, you’ve got it all three times, you’re more likely than anyone else to die of this disease.

“I thought, look at me I’m healthy and look at all the gay men I slept with. They’re all completely healthy. This is bourgeois propaganda.

“But it changed when I started watching people die and because I’ve had a very active sexual life. I would be what people call promiscuous.

“A substantial amount of men that I slept with, or have been very close with, have already died. In fact, one died over the weekend.

“Men I slept with, men I clicked with, people I had short relationships with – all dead, and that is what made me realise that this was a very real disease.

“I suspected I was [HIV] positive, and it pushed me in a direction of dealing with human rights of people with HIV/AIDS and that’s how I ended up at the AIDS Law Project in 1994.”

Achmat now sees himself as part of the AIDS bureaucracy – a group of people who live off AIDS. “We really have to ask ourselves all the time: is what we’re doing the best for people with HIV or is it to be able to get around and be seen and to be heard?

“I do my activism so I can sleep at night’¦I never slept so well as when after I came back from Thailand. Those two nights immediately afterwards were my best sleeping nights for a long time.”

In Thailand, Achmat bought and smuggled back into the country 5 000 generic tablets of fluconazole, a medicine able to treat thrush, an opportunistic infection that plagues many HIV positive people.

Despite the fact that Achmat has had severe bouts of thrush and pneumonia, he has made a principled decision not to go onto anti-retroviral therapy.

“In December 1998, my doctor wanted to put me on anti-retrovirals and I didn’t want to because I couldn’t afford it and because people don’t have access to it.

“Then, as I got sicker and sicker, I changed my mind and decided to go onto the drugs. My friends would have paid.

“And when they were about to give it to me, I again refused. I said, I can’t do this.

“Then I got fluconazole and I got much better, thank Pfizer. I think it was about 3 000 bucks worth of fluconazole, which my friends and my ex-boyfriends’ club, paid for.

“I think people really ought to think very carefully. I think doctors push people into taking anti-retrovirals far too early. If I hadn’t said no, I wouldn’t have allowed my immune system to recover by itself as it has.

“But then why did my immune system respond better? Let’s be very honest about it. I live a privileged life. I can take sick leave when I need to. The minute I get a cold I go to bed.

“So from that point of view, those are the things the President is right about. If you do those things and you have access to those things you’re going to live longer.

“So for me that’s not a problem. But I know there’s going to come a time when my body cannot carry me. I won’t have the strength and then I want to have the right to go on to anti-retrovirals. But if they are not available to the mass of people in our country I will not take them.”

Achmat’s animated voice tones down significantly when he talks about living with HIV. “It’s not nice. I wish I didn’t have HIV. I can’t take a holiday from it. And I’m scared, I mean I am actually a little bit scared.

“I looked for it and I got it, in the sense that I didn’t take the precautions,” says Achmat, who discovered “many years ago” that he was HIV positive.

“It’s always been a very difficult thing for me and I was in denial about it for four, five six years, I didn’t disclose because I was in denial. We all have a right to do that.”

“The one thing that really gets to me is that people never come out straight saying: ‘What’s wrong, do you have thrush or do you have herpes? Or ‘that sore on your mouth looks really horrible, I don’t want to catch it, what can I do?’.

“They always whisper ‘ ‘how are you’. And there’s nothing that irritates me more than that tone of voice and that concern. Get used to it because there are going to be many people like that.”

What does the future hold for Zackie Achmat? Except for writing novels on subjects of “madness”, he wants to find more time for his favourite past times ‘ “Read, read, read and movies.”

And new causes? “Maybe I’ll tackle racism. But if there are causes, there are too many.”