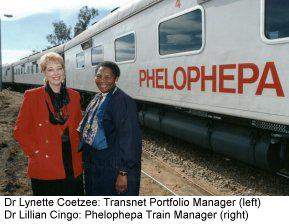 Several short films about innovative health care projects won recognition at the the South African National Television and Video Association awards ceremony recently. Top honours went to “Hero of the Hills”, a video about the Transnet Phelophepa train which has been delivering health care to remote communities for the past four years.

“Hero of the Hills”, a short film about the Transnet Phelophepa health care train, recently scooped the prestigious Dolphin Award and four others from the National Television and Video Association.

East London director, Danie Hefers of The Boardwalk Production House, walked away with the Dolphin Award at a ceremony held in Port Elizabeth recently.

Hefers received the award for “Hero of the Hills” which will be used as a marketing and fundraising tool. It was shot in the Eastern Cape and features local actors.

Phelophepa has bought primary health care to thousands of rural South Africans and has managed to reach almost 5 000 individuals every week for the past four years. A total of 67 855 patients have received quality and, in most cases, free health care.

A survey among 475 people trained in the Phelophepa Edu-clinic, showed that these individuals had reached and shared their knowledge with 50 000 people within their communities in KwaZulu-Natal and the Eastern Cape.

The train is a mobile clinic that stops at various rural destinations for five-day visits to supplement services already rendered by the Department of Health.