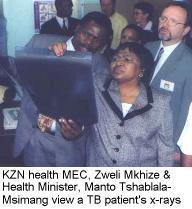 However, by the end of the year every province will have at least one TB/HIV site to address the diseases together, as TB is the most common opportunistic infection in South Africa responsible for about 40% of AIDS deaths. These TB/HIV sites will offer prophlylactic TB treatment to HIV positive people to prevent them from contracting TB, according to Dr Refiloe Matji, head of the Department of Health’s national TB programme.

Despite the fact that the HIV epidemic was exacerbating the TB epidemic, South Africa has improved its TB cure rate from 15,8% of cases in 1997 to 62,9% in 2000, according to health Minister Dr Manto Tshabalala-Msimang.

Mkhize, Matji and Tshabalala-Msimang were addressing TB patients and health workers at KwaMashu Chest Clinic in KwaZulu-Natal ahead of an international conference on TB and lung disease in Durban this week.

Tuberculosis is one of the most prominent infectious diseases in South Africa with an etsimated 35% of South Africans carrying the tubercule baccillus that causes TB. Worldwide, about two million people die of TB every year, and South Africa has the ninth worst TB infection rate in the world.

It costs R400 per patient for a six-month course of TB treatment. However, patients who failed to complete their course run the risk of developing multi-drug resistant TB which is extremely difficult to treat and costs
about R20 000 per patient.

In order to encourage TB patients to take their drugs, the government had introduced Directly Observed Treatment Short-course method (DOTS) in which TB patients swallowed their pills daily in front of their volunteer DOTS observers.

“We have 100% DOTS coverage of TB patients in the Free State, Gauteng and the Western Cape and about 80% in Mpumalanga and Limpopo,” reported Tshabalala-Msimang.

However, a number of DOTS volunteers at the KwaMashu Clinic appealed to the government officials for help, saying that many of their patients were poor and hungry and battled to take their strong TB medication on an empty stomach.

Tshabalala-Msimang confirmed that this was a national problem and that government had limited funds to provide social grants. She and Mkhize both made a strong appeal for all people to grow their own vegetables in a bid to get healthy.

“People must plant spinach and carrots in their gardens. You can even fill tins with soil and grow vegetables,” said Mkhize.

Some 600 international experts will discuss ways of improving access to care in TB and lung disease until Friday at the 14th conference of the International Union against TB an Lung Disease.

The health department aims to provide 53 000 people with AIDS treatment by March of 2005. At present, about 8000 people are receiving free antiretroviral therapy in the public health sector. Health-e spoke to Dennis Matwa of the Treatment Action Campaign about the Civil Society Monitoring Forum launched recently to monitor the government’s Comprehensive HIV and AIDS Treatment Plan.

Having multiple and concurrent partners, has been identified as one of the causes for rising HIV infections, particularly in southern Africa. Research has shown that the practice is considered as normal. In this report, we meet a man who tells us why he has more than one partner. 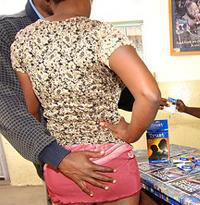 South African activists and scientists will play a prominent role in the 14th International AIDS conference which opens in Barcelona on Friday.