Home » Where the River Flows 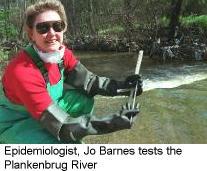 An impoverished community and a determined Stellenbosch epidemiologist are on a collision course with local authorities about a river so polluted it’s potentially life threatening. By Anso Thom.

It’s a strange sight. A middle-aged, white woman dressed in thigh-high rubber boots, shoulder-length black rubber gloves and a surgical mask wading cautiously into a toxic river that runs past a densely-populated informal settlement. In the distance, the majestic Simonsberg and Jonkershoek mountain ranges loom over lush wine lands creating one of the most picturesque destinations in the Western Cape.

Four years ago, Jo Barnes was drawn to the Plankenbrug River that meanders past Stellenbosch before it joins the Eerste River that is used to irrigate many of the famous wine estates in the region.

As an epidemiologist with the Faculty of Health Sciences at Stellenbosch University she took over a study on the prevalence of intestinal worms in Kayamandi.   This is a community of around 25 000 people who had settled in a sprawling shanty-town that has been steadily spreading around the periphery of Stellenbosch for several years.

‘What I saw horrified me and it literally haunted me. The people’s suffering caught me very badly,’ Barnes recalls.

As a scientist, Barnes’s job is essentially to look for dangerous microbes that threaten public health and well-being, but she soon realised that the environment and the human beings who live in it are inseparable.

‘At first I only looked at the river, but then I looked up from the river and saw where all the stuff (pollution) was coming from. Initially I had no entry there,’ she said about her first encounter with Kayamandi.

Barnes had discovered a river so contaminated that it threatens the health and safety, not only to the community that has settled next to it, but also to the rest of the region that is exposed to its water.

For four years Barnes has been lobbying local authorities to do something about this unacceptable situation but says she has been brushed off or simply met with silence.

Mr Eddie Delport, Stellenbosch Town Engineering Department, is responsible for sanitation maintenance and has been accused by many of using ‘bully tactics’.   Delport, who has been charged by residents of seldom setting foot in Kayamandi, is viewed as one of the stumbling blocks in attempts to clean up the settlement and the Plankenbrug River.

Firstly, he is convinced that no more than 14 000 people live in the settlement and not 25 000, as was discovered in a recent Danish-sponsored project done in conjunction with the Department of Water Affairs and Forestry.

His view is that the people of Kayamandi are to blame for the pollution of the river and that the sewage system in the area ‘is a normal system just like any other town, a first world system.’

“I know I’m responsible for the storm water and the sewage and I’ll stick to that,” said Delport.

Delport is of the opinion that despite the overcrowding the system is ‘working well’ and he denied that sewage was overflowing into the river blaming ‘other things that get spilled into the storm water system.”

He denies that the municipality has been slow in responding to problems: “Well you can go to my complaints office, it’s a full time office, they register all the complaints and they are dealt with in 24 hours.”

But the facts are clear and anyone who visits Kayamandi will attest to the severe problems regarding the polluted river and the mountains of uncollected garbage bags that at times pile up in the settlement.

Residents, most of whom are unemployed, are too poor to pay for services and are being neglected by the local authority. The river that runs below the settlement perched on a hillside is choked with sewage, household waste and rubble and the dusty streets are littered with general waste.

During the three-year Danish project in conjunction with Water Affairs in 2001, the community became actively involved with pollution and environmental concerns. The project addressed numerous issues including the repair of sanitation facilities, community education, creation of a central office to report breakages and the training of plumbers. The success of the project relied heavily on the participation of the Stellenbosch local authority, but as soon as the scheme ended the initiative collapsed.

The people of Kayamandi were literally left in the lurch by local authorities that had undertaken to buy in to the process at the start of the test case.

Barnes’ periodic tests (every six weeks) of the river’s water have shown, at it’s worst, E. coli (faecal organisms) measurements well in excess of 12 million per 100 ml and at it’s best (while the pilot project was running) measurements of around 9 000.

Drinking water should contain no E.coli while for irrigation purposes the upper level is 4 000 organisms per 100 ml.

Currently, the list of bacteria found in the water reads likes a horror story. (see side bar)

‘The river is very sick, so I am very worried about it,’ said Barnes adding, ‘The more scientific evidence I produce and the more I try and get co-operation, the more resistance I get.’

But Barnes isn’t the only voice to speak out in Kayamandi. Most of the residents are unhappy with the unsanitary conditions and would like to see a revival of some sort of initiative that involves all stakeholders.

Golden and Nosisa Mgudlwa, both unemployed, have lived with their four children, Nomzamo (15), Sbusiso (13), Khanyisa (9) and Luvuyo (5) in Kayamandi for around 10 years. Their home is a rickety shack that perches on a pavement near a busy thoroughfare. Mr Mgudlwa does ‘odd handyman’ jobs and for the rest they rely on his disability grant (he has severe diabetes).

These concerned parents have banned their children from going anywhere near the polluted river.

Mrs Mgudlwa visits the clinic at least three times a month when her children suffer from a range of complaints from angry skin rashes to diarrhoea.

According to the Mgudlwa’s the toilets they share with other families are mostly blocked and sometimes locked. The communal toilets are locked at night to curb vandalism, according to the Municipality.

‘At night we use a bucket. It’s too dark to go to the toilet. In the morning we throw the plastic bag in the waste bin,’ said Mr Mgudlwa.

Another person who believes that problem is not being solved is Wilna Kloppers, Assistant Director Water Quality in the Western Cape.

“We need urgent, critical action, it is just a miracle that we haven’t had a major cholera incidence and things like that because it’s basically just a matter of time.

‘We feel that they [Stellenbosch Municipality] actually know there has been a problem for quite a while. It’s very difficult to get them into gear and commit resources to the real issues,’ said Kloppers.

Kloppers believes that the pollution will continue until there is only one family per toilet (at the moment it is closer to eight families).

“However, there is a lot that can be done to alleviate the pollution problem in the meantime.”

‘But until we get commitment [from the Municipality] that says we’re going to look for the source of this until we find it and fix it, we’re sitting with a major (long term)  problem,’ she said.

Barnes agrees ‘The big problem is that Stellenbosch Municipality have allocated a proportionally small amount for maintenance. They also have too few staff members. They do not regard maintenance in Kayamandi as anything but a headache so they do not pay as much attention to maintenance as the situation warrants.’

She said one of her biggest frustrations was that it had been proven by the project that a little bit of effort could make an enormous difference.

‘Just properly maintaining what there is, coupled with education, is a start,’ said Barnes.

She said there is definitely inappropriate use of toilet facilities in Kayamandi due to ignorance and vandalism.

But when persons (some from outside Kayamandi) were caught stealing taps, the Municipality declined to prosecute.   “They can’t use vandalism as a reason why the facilities are in poor working order and then fail to act against it when given the chance,” said Barnes. She added “It is very difficult to teach people to wash their hands after using the toilet when the taps do not work.”

Because the level of non-payment is high, local authorities in South Africa are reluctant to pay the same level of attention to services and maintenance in poor areas as in affluent areas.

But even if the Municipality chooses to disregard Kayamandi, the consequences downstream are dire. The Plankenbrug delivers its water to an agriculturally sensitive area also containing many tourist attractions.

Farmers downstream have taken to using gabions (wire baskets filled with stones) that they put in the river at the confluence to take off the cleaner water from the Eerste River for irrigation. This leaves the downstream users mostly with the dirtier water from the Plankenbrug.

Barnes feels that in order to preserve this magnificent piece of the Western Cape everyone needs to become involved.

‘Apart from the health and economic implications, we are soon going to run out of places   where we can communicate with nature and get a sense of our place in the natural world. In order to preserve this we need to confront the problems that Kayamandi and similar settlements present us. We cannot, dare not, turn away.’