14th November 2003 | Health-e News
The second HIV prevention vaccine to be tested in South Africa began its Phase One trial in Johannesburg and Durban, on Wednesday November 11, 2003. The testing of the Modified Vaccinia Ankara (MVA) follows just a week after the start of the Venezuelan Equine Encephalitis vaccine trial. Dr Eftyhia Vardas, Director of the HIV Vaccines Programme at the Peri-natal HIV Research Unit at Chris Hani Baragwanath Hospital spoke to Health-e.

The second HIV prevention vaccine to be tested in South Africa began its Phase One trial in Johannesburg and Durban, on Wednesday November 11, 2003. The testing of the Modified Vaccinia Ankara (MVA) follows just a week after the start of the Venezuelan Equine Encephalitis vaccine trial. Dr Eftyhia Vardas, Director of the HIV Vaccines Programme at the Peri-natal HIV Research Unit at Chris Hani Baragwanath Hospital spoke to Health-e.

EFTYHIA VARDAS: The MVA vaccine was developed as a collaboration with the International AIDS Vaccine Initiative and the Oxford group, in the UK. And what they’ve done there is: taken the old small-pox vaccine, which is the Modified Vaccinia Ankara, or MVA, and have used that as the vector to take in the genes of interest for the HIV vaccine. And in this instance, it turns out to be a sub-type A re-hashed gag. So, once again we take out the recipe for the sub-type A coat of the virus and we make it in the laboratory. And what we’ve done is added bits and pieces that will make an increase in the immune response’¦

KHOPOTSO: You’ve actually taken a particle of the sub-type A HIV, is that what you’re saying?

EFTYHIA VARDAS: We’re taking the recipe and then reconstructing a good antigen in the laboratory. The better the antigen the more likely that the vaccine will work. And that’s why it’s very encouraging. It’s because we’ve manipulated it within the laboratory to make it a much better inducer of an immune response.

KB: You’re saying antigen’¦ If you can just describe that in laymen’s terms?

EFTYHIA VARDAS: As all vaccines, they work to train your body to recognise a foreign substance so that in the future when they see that foreign substance, they’ll fight it off. So, for example, a polio vaccine has an antigen inside it, which is similar to the polio virus itself, so that your body gets trained to fight off that particular antigen. And the way your body does that is by making antibodies. So, your antibodies fight off the antigen’¦ So, for example, once we give you a polio vaccine your body recognises the antigen or the structure of that vaccine and then makes antibodies which are going to fight off against that particular virus when you meet it up again.

KB: And there is no risk of anybody actually contracting HIV or small-pox in this instance?

EFTYHIA VARDAS: Absolutely no risk whatsoever. You cannot get HIV from HIV vaccines because there is no HIV in there. There’s just recipes that we’ve duplicated in the laboratory and made sections of the coat or sections of the virus that we need to make an immune response. The actual small-pox:   You cannot get small-pox from MVA because MVA doesn’t cause small-pox – it’s a small-pox vaccine. It’s a completely different virus to the virus that causes small-pox’¦ What you do need to know is that MVA has been given to almost a 120 000 people during the small-pox immunisation campaigns. And, so it’s extremely safe as a vector for an HIV vaccine.

KB: For HIV, has it already been tested elsewhere?

EFTYHIA VARDAS: It has, indeed. Phase One and Two trials have been done in Kenya and in Oxford at the same time and the results have been very good. From the safety profile, this is an extremely safe vaccine. From the immune profile we’re still waiting for the complete data. But it has been very encouraging, so far.

KB: Where is that data going to come from ‘ from the very trials that you’re talking about?

EFTYHIA VARDAS: Our trial is really, just one again, reiterating safety in this population and looking at the various dosage levels for the vaccine as well as the way it is given. So, for example, can we give it as an injection to the muscle, or an injection into the skin, or injection into the subcutaneous tissues ‘ all of which have implications of how your body will respond to the vaccine. And that’s what we will be doing in South Africa.

EFTYHIA VARDAS: The thinking has changed dramatically about whether or not each region has to develop their own vaccine. In fact, the current thinking is that if you have a good antigen, or something that will make a good immune response in someone’s body, it doesn’t matter where it’s coming from. And it’s attractive for us to test this vaccine because it is an African vaccine. It has been developed within Africa. And once again, if we can get a vaccine that will work for the whole of Africa, instead of each region having to develop their own, it will make much more sense. There is no human data yet, to say that we shouldn’t be doing this. So, we need to accumulate the data and that’s really one of the spin-offs of why we’re doing this trial as well.

A two-day meeting on extensively drug-resistant Tuberculosis (XDR TB) has resolved that in the absence of quicker diagnostics and new medication to treat TB in all its forms, national TB programmes need more strengthening, especially in the face of HIV/AIDS.

HARGEISA: (PlusNews) – A new programme is targeting about 800 primary and junior high school students in northwestern Somalia’s self-declared republic of Somaliland with HIV/AIDS messages for the first time. 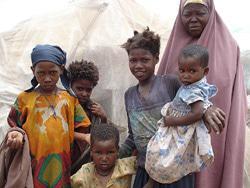