23rd April 2004 | Health-e News
Although health care delivery in the Eastern Cape still faces major challenges, there are positive developments. Some 131 new clinics have been built since 1994 and the department is committed to improving services as Dr. Litha Matiwane Head of Hospital Services explains.

Although health care delivery in the Eastern Cape still faces major challenges, there are positive developments. Some 131 new clinics have been built since 1994 and the department is committed to improving services as Dr. Litha Matiwane Head of Hospital Services explains.

Translation:   It’s widely known that the health public system in the Eastern Cape has deteriorated over the past decade. But efforts are being made to improve the situation.   Dr. Litha Matiwane Head of Hospital Services explains.

DR MATIWANE: We have taken an approach, which says here are our main issues. We’ve found out that it was around the actual management through ensuring that there are enough numbers of people to actually run the services. That was, one, the major challenge and I think we are moving forward in unraveling that. The levels of Hollywood posts (Acting Personnel) have decreased significantly and people have been appointed. The second issue is the issue of the actual service provision and whether now we have the service available to the appropriate places. And this is the issue where the revatalization comes through. Revitalization its main focus as driven by national is on hospitals as you might know from the past that many institutions have been deteriorating with time there has not been any revamping. The revamping has focused on infrastructure equipment but we then said it won’t help to have a beautiful structure with top class equipment and yet you can’t manage it properly. It has also an element of organizational development and quality improvement within the revitalization programme. Those are the issues we focused on in terms of ensuring that the structures are fine. The service impact as well we know that we’ve got major challenges in terms of luring and recruiting people into the Eastern Cape. We’ve focused diversely into saying that we need to recruit and retain in trying to improve service conditions so that people can say I want to work there because the service conditions are better.

Translation: Health workers are reluctant to move to rural areas because their spouses cannot find jobs and families must live off a single income. The lack of schools in rural areas is another reason why people who have children do not wish to go to move to such places says, Acting Head of the Eastern Cape provincial Health Department, Mike Fraser.

MIKE FRASER: There’s massive haemoraging out of the health system and the lot of it is to overseas. Inevitably the less resourced and historically badly resourced provinces are the ones that will suffer the most because people will leave the less hospitable area, long before they leave the pleasant green cities and that’s unfortunately one of the issues we are grappling with. As the reverse will happen if you had an influx from overseas or from any foreign countries of nurses the first places they would go to would be in fact be cities they wouldn’t be encouraged about going to the particular inhospitable rural areas. There are real problems on the ground related to that for instance even if you had the people how would you encourage them to stay there because the issues around, the logistics of getting your children to a school for instance.

Where are the schools? Where does your spouse work if you move to one of those areas because there’s massive of unemployment? Remember this province unemployment is about 66 percent. It’s not just a pure number issue it’s how one would attract and retain and that’s one of our main strategies at the moment that we are looking as to how do you recruit and retain medical professionals. Umtata in fact is another good example anybody who went to Umtata at the moment could not get a school nobody. Umtata has other logistical issues particular relating to the provision of housing it’s almost none existent. 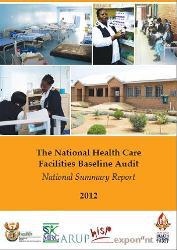 The launch of the Joint Public Health Enhancement Fund last week is a rare occurrence in the history of South Africa’s health care. The Fund illustrates that in a climate of tough economic times and international donor fatigue, local private sector funds are sorely needed if South Africa is to improve its health outcomes.

The health minister Dr Manto Tshabalala-Msimang, denied in Parliament that she ever said that traditional medicines, nutrition and vitamins should be offered as an alternative to antiretrovirals. Health-e, spoke to the health department’s Director-General Thami Mseleku, and asked him what point the Minister seeks to make when she talks about AIDS treatment.