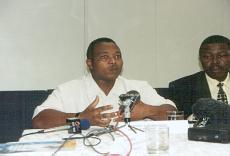 Ten years later, health services in the flat, often bleak, central province of Free State are stable and the quality of care is improving.

When Victor Litlhakanyane became the first black doctor to qualify in the Free State, he was not welcome to eat with his white colleagues in the dining room of province’s biggest hospital, Pelonomi, in Bloemfontein.

Now, many of those who would not eat with him report to Litlhakanyane, who has been the provincial head of health since April 2001.

‘While I don’t want to stereotype anybody, Afrikaners, once they believe in something, tend to go for it,’ says the youthful looking Litlhakanyane, dressed in an open-necked Cuban shirt.

‘We have a very mixed management, in terms of race and gender, at all levels and so far the administration has been very loyal,’

‘But,’ adds Shadrack Shuping, the executive manager of clinical health services, with a twinkle in his eye, ‘while we now have a culture of working together, you can also get dismissed for being a racist. And that has happened.’

Ten years down the line, health services in this flat, often bleak, central province are stable and the quality of care is improving. This is despite a lack of expertise and massive health challenges, many of which are the legacy of the mining industry that dominates the province.

A survey conducted by the HSRC released in 2002 found that the Free State has the highest HIV/AIDS rate in the country, while tuberculosis and malnutrition are also serious problems.

One of the keys to the Free State’s ability to provide stable care lies in the fact that it has built its health system from the primary level upwards.

‘Free State developed a district-based system very early. It had leadership that believed in this approach and so it managed to move from a hospital-centred approach to a primary health approach,’ says Health Systems Trust’s Dr Carmen Baez, who worked in the province for four years.

For Baez, the district-based approach ‘ which other provinces are struggling to implement ‘ has been successful thanks to strong leadership and the early introduction of the Free State Health Act in 1999 that provided the legal framework for the district health system.

As part of the reorganisation of health services, various levels of care have been introduced and certain hospitals are now designated as referral hospitals which means patients can only go to them if they have been referred by their clinics of district hospitals.

Unlike in many other provinces, the referral system works relatively well in Free State precisely because referral hospitals are able to turn away patients as they know that they will be able to get the care they need from their district hospitals and local clinics.

Dr Marthinus Schoon, clinical head of the province’s biggest hospital, Pelonomi, is proud of the fact that annual patient figures at his cash-strapped hospital have actually dropped from 27 315 in 2001/2 to 25 357 in 2003/4.

This is despite the fact that beds in the hospital have been cut by almost half since 1994 to enable resources to be redirected to the lower levels of care.

‘I have put staff under a lot of pressure not to admit people who don’t need specialised care, and to direct those patients to the correct hospitals, which has helped to stabilise patient numbers,’ says Schoon.

‘On the clinical side, we push the concept that if the volume of patients is too great, we will be unable to provide quality care.’

The primary healthcare approach has also meant a reorientation of thinking. Nurses in the clinics have been trained to encourage patients to looking at their health holistically, considering solutions such as better nutrition rather than medicine only. This change of mindset has also brought savings for the province. Before 1999, an average of seven drugs were prescribed for sick children whereas today this figure is two or three drugs.

Free State’s TB cure rate is over 70%, which gives a good indication of the province’s ability to monitor and follow up its patients.

The Lejweleputswa district around Welkom is the jewel in the Free State’s health system and has won numerous awards, including best rural health district in the country in 2001. The road to Welkom is long and straight, pale yellow mine dumps and fields of sunflowers breaking the monotony of the flat scrub.

Welkom’s Bongani Hospital (formerly Goldfields) is the district’s regional hospital. The unassuming hospital, built on the doorstep of Thabong township, is one of the most racially integrated hospitals, in terms of both staff and patients.

Eighteen towns, including places with forlorn names such as Verkeerdevlei, refer patients to the 460-bed hospital.

Bongani was recently one of a handful of hospitals countrywide to be accredited with the Council of Health Service Accreditation of Southern Africa (COHSASA) the first time it applied. Cohsasa is an independent body that assesses and accredits healthcare organisations that meet certain predetermined standards, in an effort to improve the quality of health care.

It also has the best revenue collection record in the province for getting patients to pay for services.

Given this track record and the fact that it is in a high HIV prevalence rate, Bongani, was the obvious choice for the launch of the Free State’s anti-retroviral programme on 1 May.

‘We have been waiting for this for a long time,’ says principal specialist Dr Ralph Nhiwatiwa. ‘The staff is particularly devoted. We organised our own training before the formal training. We have a very good team of managers and there is good communication between primary and secondary levels of health services.’

Nhiwatiwa is particularly passionate about the treatment plan. ‘I lost my brother to AIDS in 2000. I nursed him here in this very hospital. It made me very sensitive to the issue. I don’t want anyone else to go through this experience.   I want to spare others this pain.’

Mining houses Harmony, Goldfields and Anglo American started antiretroviral programmes in the district last year, but only for their immediate workforce.

‘There was starting to be a division in the town between the lucky ones who worked for the mines and had access to treatment and those who didn’t, often the wives and children of the mineworkers,’ says Nhiwatiwa. ‘So I am very glad we are able to offer the drugs at the public hospital.’

He adds that the mining houses’ programmes are going very well, and Bongani, which has a good relationship with the mine doctors, will be able to draw on their expertise when developing its programme.

There is also a network of care organisations for people with HIV in Welkom, including Morning Star, a daycare centre that provides daily food, care and schooling for HIV positive children.

When I tell Nhiwatiwa that I would like to return when the ARV programme has been launched, his response is simply: ‘You are welcome to return whenever you like. You will find me here. I have decided to dedicate myself to this.’

Such commitment is a hallmark  not uncommon among the Free State health staff, a number of whom have benefited from the province’s home-grown approach to health challenges in which a lot of energy has been devoted to staff development.

Like every other province, the Free State is short of staff and money. Schoon says almost 50% of Pelonomi’s specialist posts, particularly surgical positions, are unfilled. Some 40% of Pelonomi’s   professional nursing posts are vacant, and the hospital has to turn to nursing agencies during busy periods. Radiologists and pharmacists are also in short supply.

The provincial department has set aside R7-million to provide bursaries for local students to study medicine and hospitals across the Free State encourage all staff to advance, with cleaners being encouraged to train as nurses.

‘But even if we could get the people, we don’t have the money to pay them,’ cautions Kibi Madolo, Pelenomi’s CEO, who estimates that the hospital needs an extra R70-million a year to meet the community’s needs.

To improve its financial prospects, Pelonomi has negotiated an agreement with Netcare, which will see part of the hospital being transformed into a 153-bed private facility. Netcare has committed itself to spending R20-million to upgrade Pelonomi itself, and will pay rent for the buildings it uses. A similar agreement has been reached to convert part of Universitas Hospital to private wards, and the department calculates that the two private deals will generate R206-million over the next 16 years.

Pelonomi is still very tender about the deaths in March of six premature babies who were given food contaminated by bacteria that travelled from a blocked drain to an artisan’s hands to the pharmacy basin to the hands of the pharmacist assistant who prepared the food.

Top management face disciplinary action, and are deeply pained by the incident. Schoon, who has been at Pelonomi for 18 years, says the babies’ deaths are a blow as so much has improved in the past decade.

However, the official enquiry says there was a lack of proper infection control in the hospital, which indicates that the hospital still has some way to go to achieve the high quality it seeks.

The babies’ death has cast health services in the Free State in a poor light. But the province’s many achievements go largely unsung.

In a presentation to Parliament earlier this year, the Free State health department indicated that it had exceeded all its health service delivery goals. Both Litlhakanyane and Health MEC Ouma Tsopo are highly regarded as hard workers. At the time of my visit, Tsopo, who had been both electioneering and conducting community road shows to popularise the ARV treatment plan, had collapsed and been hospitalised in Bethlehem.

‘But we are very proud that she was admitted to one of our own hospitals,’ says Litlhakanyane with characteristic good humour.

Sanitation: Second lowest in the country.

STIs: Over one million new cases treated in 2002

HIV prevalence (antenatal): 30.13% (41% in the predominately mining district of Lejweleputswa)

Per capita allocation: R866.11 (R183 of this goes towards primary health care)