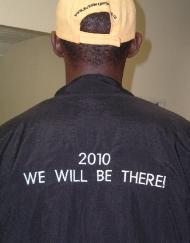 What makes young people walk hundreds of kilometres to promote no sex before marriage?

“Abstinence is the only way you can be 100% sure that you remain AIDS-free. Abstinence is cool,” says Philani Simelane.

The 24-year-old was one of 15 young people who recently walked 250km from Durban to Ladysmith to promote the idea that people should wait until they are married to have sex.

The walkers rose at 4am each day, were on the road in the freezing cold by 5am and then walked mostly uphill into the sun for between 30 and 40km a day.

“My leg muscles were strained. It was very tiring. Some people had blisters. I got one here,” says Simelane, pointing to a large mark on his upper lip.

“Sometimes we were so tired that all you could hear was the ‘kwa-kwa-kwa’ of footsteps. It was very tough. What gave us strength was the message. In 2010, we will be there. By 2020, we want South Africa to be AIDS-free.”

But abstinence is hard to popularise in a country where, by the age of 17, the majority of young people have had sex (according to the Nelson Mandela Household Survey).

Virginity is as stigmatised as homosexuality by Umlazi school pupils, according to research conducted by US researcher Mark Hunter.

“They say I have lost my style,” admits Simelane, who had a number of girlfriends and fathered a child before he converted to Christianity and started to promote abstinence.

“They say I am for abstinence because I am not getting the attention of girls, I don’t go to parties and I am not normal. But I tell them that I am thinking about my future. I don’t have to go straight to my death by walking into the fire.”

“Every Saturday young people are being buried. In 1976, young people stood up and fought against things that were killing them. We cannot allow HIV to destroy us. Nobody else can do it. So we are saying ‘mncishe’ ‘ abstain ‘ and wait for the right partner.”

Xulu too has been told that she is “crazy”, but she and Simelane both believe that they are part of a “revolution”.

“When HIV first started to kill people, there were many who would not accept that the virus exists. Now everybody agrees that it does. We are starting an abstinence trend,” says Xulu.

Both Simelane and Xulu are members of the Hope Christian Centre, which has held annual abstinence walks for the past three years.

Dr Taki Dube, who runs the Hope Centre’s HIV/AIDS clinic, says the church has a membership of “around 5000 and 70% of these are young people”. She estimates that the Dome, which is part of the same Christian movement, has similar membership numbers.

Abstinence is a key part of the Hope Centre’s preaching. But it includes “kissing, caressing and visual stimulation that may entice one to have sex” on its list of things that parishioners should refrain from doing.

Simelane says this approach is right: “When you start knocking on a door, you expect it to be opened. Once you are aroused, it is hard to stop.”

He believes that many young people, “especially young ladies”, have sex to get affirmation.

“They lack self-confidence, and because they are not sure of themselves, they have premarital sex. They also depend on older men to buy them things like cellphones to make them look confident. We are saying to them that the love of Jesus will give them the self-confidence to believe in themselves.”

“We want people to feel ashamed to sleep around. But we also want them to understand that they are so precious that they should save themselves for marriage,” says Simelane.

Abstinence is part of the Department of Health’s ABC safe sex message, but has not been promoted that vigorously.

Anthropologist Professor Suzanne Leclerc-Madlala says abstinence is “a relevant stance, given that we have failed to prevent the spread of HIV with our near-total focus on condom promotion”.

“Numerous studies have shown that we need to promote other forms of behaviour change including abstinence and mutual monogamy. But rather than just saying no sex,  other ways to get pleasure rather than penetrative sex could be encouraged,” she says.

A third of the funds available for HIV/AIDS prevention programmes from his President’s Emergency Plan for AIDS Relief (PEPFAR) are earmarked for abstinence-until-marriage programmes.

The Treatment Action Campaign (TAC) criticised this position in a petition delivered to the US consulate in Durban on Friday.

“While we support the promotion of delayed sexual activity as an important aspect of life-skills education, we do not believe that this should be framed in moral judgments concerning marriage or at the expense of condom promotion and distribution, especially to youth,” said  the TAC.

But for Simelane and Xulu, “Mncishe” is the way they have chosen until they meet the person they want to marry.