Hip surgery despite the odds

Wilson Mhlongo winces, his eyes screwed up in pain as Dr Kobus Viljoen tries to find a space between his vertebra to insert a huge injection for a spinal anaesthetic.

It is 9.15am and Mhlongo is preparing for a hip replacement operation to replace the ball and joint of his right hip, eroded by arthritis.

Dr Victor Fredlund, assisted by Viljoen, will do the two-hour operation. As the hospital has no anaesthetist, Mhlongo will be awake throughout.

Mseleni District Hospital, a 190-bed hospital on a sandy hill between Sodwana and Kosi bays in far northern KwaZulu-Natal, is an unlikely site for this relatively high-level orthopaedic operation.

But there is such a high incidence of arthritis in the area that it has become known as Mseleni Joint Disease (MJD), and even people in their twenties need new hips.

‘The cause of the arthritis here is still something of mystery,’ says Fredlund. ‘Poor diet could have played a part, but there may have been an infection or a toxic substance in the food or water that affected a large portion of the population.’

Preliminary studies seem to have ruled out genetics. While a lot of people in the community still have MJD, there is definitely a decrease in the younger generation, he adds.

Whatever the cause, the result is pain and difficulty for those who have MJD ‘ especially as walking long distances through thick sand is part of everyday life.

Mhlongo is only 51, yet he has the stiffness of an old man with very little mobility in his joint and a lot of pain when he moves around.

According to the hospital referral system, Mseleni patients should be sent to Ladysmith regional hospital for the hip replacement.

But, says Fredlund, patients had to wait months in the town before being operated on. To try to circumvent going to a Ladysmith, Fredlund organised for a surgeon to come to Mseleni to perform hip replacements over weekends. But he was killed in a plane crash. So Fredlund decided to do the operations himself.

In the cold, pale green operating theatre, Mhlongo is laid on his left side and his body is bound by green cloth. Only his right hip is exposed. That gets painted with antiseptic and covered in cling-wrap.

A nurse place an arm rest is across Mhlongo’s body and straps his right arm to it. Thankfully, it forms a screen that will prevent him from seeing the operation.

Once the anaesthetic has taken, Viljoen dislocates Mhlongo’s hip. At 10am, Fredlund makes the incision, cutting as deep as his knuckles.

From then onwards, the theatre resembles a carpentry shop, with the short Fredlund shadowed by his tall assistant. By 10.20am, Fredlund has sawn off the flattened ball of Mhlongo’s hip joint with an electric saw.

With much hammering, gouging, chiselling and sanding, the doctors clean out the cup socket that holds the ball in the hip joint to prepare for the new plastic cup.

Mhlongo gives a muted cry, but is comforted by the nurse at his head monitoring his vital signs. He shivers.

The scrub nurse hands Fredlund the new cup and the theatre sister mixes some human cement. By 10.50, Mhlongo has a new plastic hip cup.

Then comes an even noisier part, as Fredlund drills down Mhlongo’s femur to make space for the artifical ball, which comes attached to a long spike.

Fredlund cuts a plug from Mhlongo’s hip-ball, and jokes about recycling parts. Then he pushes the plug into the hollowed out femur. The sister mixes more human cement. This gets syringed down the femur hole, followed by the spike of the ball prosthesis.

Mhlongo speaks quietly to the nurse about going to church on Sundays.

Fredlund hums a little as he cements the new ball is in place.

At 11.25am, there is a creaking sound as the two doctors re-connect Mhlongo’s leg and hip, the new ball and cup joining for the first time. The operation that purists believe should not be done at a district hospital is all over barring the stitching. In a day’s time, Mhlongo will be put on his feet and start physiotherapy.

Fredlund and Viljoen, who do two hip replacement operations every Wednesday, prepare for the next patient.

He and his wife, Rachel, came to Mseleni from Britain in 1981. Although they only intended to stay a few years, they have been at Mseleni for almost 25 years ‘ and home-schooled three children.

In the later 1980s, frustrated by having to treat diseases caused by dirty water and a lack of sanitation, he simply organised for the hospital’s water pipes to be extended, first to the local school, then for 10km north, south, east and west. Taps were attached at regular intervals for local residents. He also helped to start a toilet-building project.

After years of running Mseleni ‘ at times as the only doctor ‘ Fredlund has handed overall management to Thema Mqadi and now oversees the clinical work only.

While Fredlund is not a man to complain, Mrs Mqadi admits that Mseleni faces many challenges.

‘We are short of doctors and professional nurses, and we lack accommodation for professional staff,’ says Mqadi.

Despite the health department’s initial caution about antiretroviral (ARV) drugs, which led to almost all AIDS treatment programmes countrywide being located in hospitals, Mseleni decided from the start that it would dispense ARVs at clinics.

‘There is no way that we could have had equity if the AIDS treatment programme had been centralised,’ says Fredlund, who points out that some clinics are almost 100km from the hospital.

Mseleni started ARV treatment in July 2004 and now has some 1 100 patients on ARVs, all of whom are managed at their local clinics.

‘We decided that the AIDS programme had to strengthen the existing health services, not take away from them. So now doctors visit clinics more regularly and give support to all chronic patients, not just those with AIDS,’ says Dr Jenny Nash, who works fulltime on the AIDS programme.

‘AIDS is a massive problem in this area,’ says Fredlund. ‘Three-quarters of the male patients who died in the medical ward over the past three months died of AIDS-related illnesses, while the remaining quarter had not been tested for HIV.’

At least 70% of female patients’ deaths were AIDS-related.

‘Most people are presenting late for AIDS treatment. We need people to come in for testing when they are still well. About half of those who test for HIV are sickly and already need ARVs,’ says Fredlund. He estimates that only a quarter of those who need ARV treatment are in the health system, with 10% of these on ARVs.

But, says Nash, after a year of offering ARV treatment, there is a difference. ‘Patients are less despondent about an HIV positive diagnosis. We are also starting to see family involvement for the first time. Patients’ spouses and children are starting to come in, and for the first time they are getting treatment as a family. This is a real chance to have openness about HIV and to preserve families.’

Mseleni is a perfect example of a hospital doing the best with limited resources. But its excellence is cemented by years of Fredlund’s unique determination and his relentless recruitment of foreign doctors, for it seems few South Africans will stay in the remote hospital.

According to the health department’s new human resource policy, foreign doctors will only be able to work in South Africa for a maximum of three years ‘ which effectively shuts out the Fredlunds with their missionary zeal.

After years of patient complaints and alleged bad service, KwaZulu-Natal’s Edendale Hospital may have turned over a new leaf. 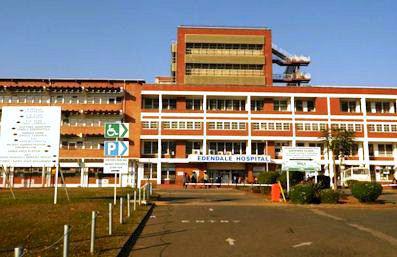 Two of the country’s most powerful figures in health yesterday crossed swords at the Health Summit over whether government should investigate providing anti-retroviral drugs (ARVs) to people with HIV/AIDS.