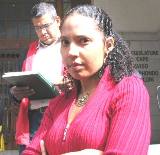 The next round in the battle against bed cuts at Western Cape hospitals will take place at the provincial parliament on Wednesday when health workers hold a protest meeting outside the legislature to voice their opposition to multi-million rand budget cuts announced in March.

The protest, organised by the ‘Groote Schuur Hospital Health Crisis Committee’, will take place before public hearings on the provincial Department of Social Development’s budget. The doctors, as well as unions and other stakeholders, are planning to make individual submissions at the hearings.

‘Health services in this province fail to meet the enormous health needs of the people. Health workers managed an ongoing crisis in which patients wait in impossibly long clinic queues, languish for hours or days in casualties waiting for beds and suffer long delays before receiving necessary treatment, specialist assessment or lifesaving surgery,’ the crisis committee said.

‘In this context we are appalled and outraged at the proposed health cuts which will affect not only tertiary hospitals, but also several secondary and district hospitals,’ the committee said in a statement.

Provincial Health MEC Pierre Uys confirmed in March that R19-million and R11-million would be cut from the Groote Schuur and Tygerberg Hospitals respectively.

Senior specialists at Groote Schuur sounded the alarm before the budget announcements saying the intended cuts would spell disaster for the institutions that were already struggling to cope.

Spokesperson for the crisis committee Dr Lydia Cairncross said that if these cuts went through they would result in the closure of several hospital beds and the closure of specialist and other out patient clinics.

‘The budget cuts will not only affect tertiary hospitals, but health centres throughout the province,’ Cairncross warned. The statement was also signed by Professor Del Kahn, head of surgery at Groote Schuur.

The petition to be handed to Uys, calls for an immediate moratorium on all health cuts at all levels of care whether it is primary, secondary or tertiary. It also calls for a consultative conference of the 2010 Comprehensive Services Plan which the committee claims results in the closure of several existing services.

The Western Cape Health Department has also come under severe criticism for failing to deliver on its commitment to start building hospitals in Khayelitsha and Mitchells Plain. These hospitals would have relieved the pressure on severely overburdened hospitals such as GF Jooste, which runs at over 100% occupancy and is already being forced to offer specialist services as they are often unable to refer complex cases to Groote Schuur and Tygerberg due to bed shortages.

‘Conditions in the public sector are such that we cannot afford to lose even one bed, a single clinic or a single health worker at any level of care,’ the crisis committee added.

The South African Medical Association (SAMA) said it was gravely concerned by the intention to close 90 beds at Groote Schuur and Tygerberg Hospitals.

The establishment and improvement of health services at primary and secondary levels of care is fully supported but it is totally unacceptable that the tertiary services have been forfeited in order to assist the funding of restructuring in the province, SAMA said in a statement.

SAMA added its support to the crisis committee petition.