Lack of exposure to information, beliefs deeply rooted in tradition as well as poverty make community mobilisation around HIV and AIDS in rural Tzaneen a difficult task.

KHOPOTSO: Development is slow in villages outside the small town of Tzaneen, in Limpopo. Calais, a village over an hour’s drive from Tzaneen, had no electricity until recently. The nearest clinic is 27km away, while the hospital is 80km far. The youth in the area is impacted negatively by this lack of development, laments Matome Phillip Lebepe, the deputy principal of Thapola a Nkona Primary School.

MATOME LEBEPE: It’s sort of deep rural ‘ the place ‘ as you can see the way it is’¦ They are not exposed, these learners’¦ Even this issue of electricity just came around 2005 and 2006. When we talk of television and the like, they started being exposed around 2006. You can see, when it comes to exposure, really it was a problem’¦ But we are trying our level best because we try to bring some newspapers around so that they can see what is happening outside’¦ The impact there, their learning, is a little bit slow because they are not too exposed.

KHOPOTSO: Gawale village is another long stretch from Calais. The streets are very dark at night as the electricity, also recently introduced, only runs in houses. The slow pace at which development makes it into the area is just as slow as the progress made to   influence people’s beliefs. Sontaga Steyn Mathekga is a teacher and lives in the area.

SONTAGA MATHEKGA: The community is still traditional’¦ Most of the families still prefer ancestral practices. They believe in ancestral spirits.

KHOPOTSO: Such beliefs are not only peculiar to Gawale village. Back in Calais, speaking in between clapping his hands together, Lebepe tells us that many people still want to believe that AIDS does not exist.

MATOME LEBEPE: Ja, ja, such things are there’¦ You’ll find someone is very sick, and they’ll indicate to say, maybe, ‘he has been bewitched’’¦ though we know that people should abstain and condomise. You know the three letters ‘ ABC.

KHOPOTSO: The economy of Tzaneen depends mostly on agricultural farming. Recently, however, no real farming has been taking place. The change of ownership of farm-lands from the previous white farmers to indigenous communities seems to have  affected production. Moshome Reuben Rabothata is the principal of Dindinnie Primary School, situated on a once productive mango farm after which the school is named. The farm has now turned into a vast bushveld.

MOSHOME RABOTHATA: When the government bought the farms, I went and asked the previous owners, ‘how are they buying these; what are you going to leave for them’? They said the government said it ‘buys only the land and the houses, not the equipments’. They removed a lot of equipments, even the pipes in the fields, in the orchards, were removed. There was a big auction here selling tractors, everything. There is nothing left. Even the grading machines where they grade these fruits were sold and taken away. If you get to the shed you will find that there is nothing left there.

KHOPOTSO: The closure of the farms has left many people without jobs. Those who are on antiretrovirals cannot buy food to take the medication with. Schools are now filled with learners who have no school uniforms and no food at home. For some, their only meal each day is through a government-sponsored feeding scheme at their schools. Gesturing with his hands, Rabothata is concerned that when it’s school holidays, some of the kids go hungry for days.

MOSHOME RABOTHATA: I have a family of about five or six kids from one family, where the father and the mother are not working. And those mainly depend on the feeding at school’¦ Like now, they are going to have porridge with cabbage. You know people hate cabbage. But if you look at my kids (he laughs), you’ll see they like the food, which means they have no option.

SONTAGA MATHEKGA: I’m a resident here. I know the learners. I know their parents and I know what they are going through. It’s a pity I cannot do anything.

KHOPOTSO: But hope that a better day will come keeps Mathekga and many other villagers around Tzaneen going.

An open fire and hot water spelled disaster for a toddler, who sustained burn wounds to both hands, at a daycare centre in Limpopo.

It protects the health of mother and baby, increases intelligence, and reduces behavioural problems among children.

The inspiring stories of two rural youth who overcame the impossible in order to serve and save their communities. 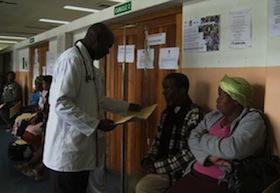