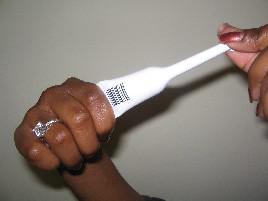 Results from the first ever microbocide trial to go through all phases of research are due to be released early next year. A microbicide is a substance that can be inserted vaginally or anally with the aim of protecting its users from HIV infection.

KHOPOTSO: A Phase III study conducted by the Population Council to investigate the efficacy of Carraguard was completed in June, this year. Carraguard is derived from seaweed. The study was conducted in Cape Town, Durban and Soshanguve, near Pretoria. Dr Khatidja Ahmed was Principal Investigator in the Soshanguve trial. She invited us to join her under a cool shade at the Sechaba Centre, where the trial was conducted.

Dr KHATIDJA AHMED: Carraguard itself is made from a seaweed product called Carrageenan. Carrageenan is very widely available’¦ and has been used in a lot of other formulations. It’s been used in creams, food products. And the product itself is safe. It’s been classified by the Food and Drug Administration as being a generally safe product for use. The product Carraguard is now a formulation of Carrageenan in a vehicle like a gel to make it accessible to insert into the vagina.

KHOPOTSO: The gel comes in small tubes and has to be applied up to an hour before sex. The aim of a successful microbicide is that it will coat the lining of the vagina. If the man is HIV-positive and the virus is released into the vagina, the HIV will not enter the vaginal cells, thus protecting the woman. For every sex act, a new gel has to be applied. The 2 500 women in the trial were followed for up to two years. The trial was randomised. That means that half the participants tested Carraguard and the others tested a placebo. Now the trial period over, researchers are anxious to see whether the product can protect women against HIV infection.

KHOPOTSO: Participants were all urged to use condoms while using the gel, so the study hopes that all the women were protected from HIV infection. But this is confusing for some of the volunteers. A twenty-one year old participant, let’s call her Lebogang, wonders about this.

KHOPOTSO: Dr Khatidja Ahmed sheds some light on the approach.

Dr KHATIDJA AHMED: Yes’¦ it doesn’t make sense because we know that condoms are going to protect them. So, why are we telling them (to use condoms)? We know from all the data that we capture throughout the study from these participants that not everybody uses condoms every time and each time they have sex. So, we capture that information, that did you use condoms; you didn’t use condoms ‘ because it’s not always in the control of the female to use condoms. Having captured that data, that data is taken into the analysis of the product data. So, we now combine the condom data together with the product analysis data and we say, ‘so many people used condoms consistently; so many people did not use condoms; and in the people that didn’t use condoms there was a degree of protection or there wasn’t a degree of protection from the product’. So, based on those statistics we can determine if the product works or not. Having said that, we have to tell them to use condoms because you can’t tell somebody, ‘go and use this product’, but we don’t know (if) it works.

KHOPOTSO: The fact that no potential microbicide can give 100% protection against HIV is another reason as to why researchers encourage trial participants to carry on using condoms. The Carraguard trial is the first microbicide trial to go through all three phases of research without being stopped. In 2000, a large-scale trial using nonoxynol-9 was abandoned after it showed participants were more vulnerable to HIV when using that gel. This year, a study by CONRAD and Family Health International using a cellulose-sulphate based microbicide was also stopped. But Dr Ahmed doesn’t seem fazed by the possibility that the Carraguard study may not be successful.

KHOPOTSO: Soshanguve resident and trial participant, Lebogang, is aware that the study might prove unsuccessful, but makes a plea to fellow country-people to participate in research studies to find potential barriers against HIV infection.

LEBOGANG: People should participate in these studies so that we can have something that will minimise the chances (of contracting HIV). They mustn’t be scared. They can go out there, find information and participate. Just do it.