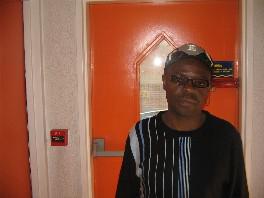 This week the South African National Defence Force’s labour policies on HIV/AIDS came under scrutiny in the Pretoria High Court. Three HIV-positive military members together with the security forces union, SASFU, have instituted a case to challenge their constitutionality, alleging that the policies are discriminatory.

KHOPOTSO: One of the applicants in the case is Sergeant Sipho Mthethwa. The 37 year old former Umkhonto Wesizwe cadre joined the armed forces after the first democratic election in 1994 when liberation army groups were integrated into the national Defence Force. Ever since joining 13 years ago, he has been stationed at the 121 Infantry Base in Mtubatuba, in northern KwaZulu-Natal. In 1999, after having served as a foot soldier for five years, he applied for deployment to a foreign country. Like all members of the military, Mthethwa had to undergo rigorous health checks under the force’s Comprehensive Health Analysis, the CHA programme. These include the testing of blood. Mthethwa tested HIV-positive. The result did not satisfy the military’s stringent health requirement, code-named ‘G1K1 GREEN’.

SIPHO MTHETHWA: That means you must be in a perfectly healthy position.

KHOPOTSO: But Mthethwa has difficulty understanding what constitutes being perfectly healthy in the military.

SIPHO MTHETHWA: I don’t know what really, really they are looking at… I remember one other guy. He was something called a light duty ‘ somebody who can’t do anything ‘ who is sick. He was a light duty for a period of six months ‘ for the whole deployment in Burundi. How can that person be deployed? He got paid for being a light duty there ‘ for just sitting, always being sick.

KHOPOTSO: While some illnesses may seem permissible, it would seem that testing positive for HIV could severely affect one’s career prospects in the military, says Deputy President of the South African Security Forces’ Union, Charles Jacobs.

CHARLES JACOBS: The policy in the SANDF, as it stands currently, is that they’ve got a policy on mandatory testing and your HIV status of being negative becomes a pre-requisite for members to gain employment in the SANDF. They further take it a step further by discriminating against those members that are already in the SANDF. They are not being afforded the opportunity to further develop their careers by being subjected to mandatory testing prior to attending a promotional course. They are also not being afforded the opportunity to deploy foreign-ly based on their HIV/AIDS status.

KHOPOTSO: The AIDS Law project is representing the applicants in the matter.

In its challenge it’s identified five policies that discriminate on the basis of HIV infection in the various military units. Leading the campaign is head of Public Education and Training at the ALP, Nonkosi Khumalo.

NONKOSI KHUMALO: We’re arguing that the HIV policy within the SANDF policy is unconstitutional. That’s the basis of our argument’¦ It discriminates and alienates people that are living with HIV in the military’¦ The way that they have been developed and being applied doesn’t create a culture where they encourage people and support people living with HIV’¦

KHOPOTSO: Sergeant Mthethwa knows the effects of the policy first hand. He argues that while indeed he is HIV-positive, the infection hasn’t rendered him unfit to carry out his duties.

SIPHO MTHETHWA: It doesn’t mean that you are sick’¦ I’m strong. I know that for a fact.   I’m healthy. It’s just that I have a virus in my body’¦ If you are positive, you are healthy. And if you are taking ARVs, you know that ‘I must treat myself like this’’¦ you can look after yourself, then what?

KHOPOTSO: The ALP seeks to show that there is no medical evidence to justify a blanket ban on all HIV-positive soldiers. It argues that, in fact, the impact of the policy is to stigmatise people and undermine HIV prevention, treatment, care and support programmes within the SANDF.

NONKOSI KHUMALO: You really should not be using an HIV status to exclude people’¦ But the bigger case is to say, (an) HIV status only should not determine whether you get employed, promoted or deployed within the SANDF. Fitness to be able to carry out your task should be what matters the most. So, for as long as you’re fit to carry out the responsibility you should be given an opportunity to do that.

KHOPOTSO: Bespectacled and donning a khaki top and pants on his medium-sized body, Sergeant Mthethwa is a picture of perfect health. He has been taking antiretroviral medication for just on seven years now. What’s ironic about his employer’s HIV exclusion policy is that while it denies him foreign deployment, Mhethwa is the one who offers combat readiness training to army members preparing to deploy to other countries. Not only does the force’s refusal to allow him foreign deployment discriminate against his person. It also denies him the opportunity to earn a better salary. After 13 years of service, he takes home just over R5000 per month. With deployment his earnings can increase substantially. But Mthethwa hasn’t resigned to despondency. He hopes that things will change.

KHOPOTSO: After all, 13 years later ‘ just three months ago, actually – he was curiously promoted from being a corporal to his current rank of Sergeant.

The SANDF justifies its exclusion policy on the following grounds: that people with HIV undermine the military’s ability to fulfil its legal duty to protect the Republic; that people living with HIV are not medically or mentally suited to tolerate stress, physical exercise or harsh weather conditions; that there is a need to keep HIV prevalence low in the military. It further states that HIV-positive individuals pose a risk to other soldiers; and that the military must comply with the United Nations’ regulations to prohibit the deployment of people with HIV as peacekeepers. But in 2001 the UN moved to revise that policy. Now in its place is the policy of Voluntary Confidential Counselling and Testing as opposed to mandatory testing. The UN does not require that any time troops be tested for HIV in order for them to be deployed as peacekeepers.

PLEASE NOTE: The AIDS Law Project has now successfully concluded its  litigation against the SANDF’s policy of excluding HIV-positive people from recruitment, external deployment and promotion.

The order means that:

– the SANDF can no longer automatically exclude HIV-positive people from recruitment, external deployment and promotion;

– that the individual applicants are entitled to relief; and

–  the SANDF must  amend its health classification policy within six months to allow for individualised health assessments of recruits and current members of the armed forces.