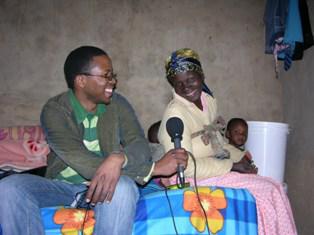 Washington – Health-e has won the community media category of the Excellence in Media Award for Global Health, sharing the stage with the Wall Street Journal which scooped the print section.

The award, which was contested by journalists and organisations from a wide range of countries, was presented today   (May 29) to health-e managing editor Kerry Cullinan at the Global Health Council’s annual conference in Washington DC.

The award   is adjudicated in categories ‘ ranging from major print and broadcast media to community media ‘ with the judges looking for individuals or organisations that have ‘most effectively captured the essence of a major issue in global health’ in the preceding year.

“Health-e’s journalists have garnered an exceptional reputation in South Africa for their straightforward, balanced, sensitive, intelligent and engaging stories. Their reporters are highly regarded among other South African journalists and, notably, by scientists and advocates working in health research,” the Global Health Council said.

The judges described the Health-e website as “one of the best online destinations for a comprehensive look at how HIV/AIDS and other health issues are impacting a nation, from small communities to national policy”.

Health-e has, over the years, maintained a strong focus on issues relating to the HIV/AIDS and tuberculosis epidemics and on the functioning of the public health service.

‘It means a lot to be recognised by a global body whose business is public health, rather than journalism,’ says Ms Cullinan. ‘All too often the constructive role of the media in tackling major social issues is overlooked, and instead attitudes to the media are often dominated by antagonisms   built on narrow interests.’

The Global Health Council is a large alliance of organisations that are dedicated to saving lives by improving health. Its members range from massive foundations and government agencies, to corporations and academic institutions, and NGOs working at grassroots within individual countries.

Health-e was founded in 1999 and although it has just five journalists, it is able to provide coverage on-line as well as in print, radio and television format. It operates from Johannesburg, Durban and Cape Town.

The quality of its work has been repeatedly recognised at home and more widely on the African continent: health-e journalists have featured as winners in the Vodacom awards, the CNN Multichoice African journalism awards and the US/SA health reporting awards.

Although health-e has many of the hallmarks of community media, most of its journalists developed their skills in major commercial media or public broadcasting. While all its on-line material may be reproduced at no cost by other media (with acknowledgment!), it also provides a dedicated service for mainstream media clients.

With newsrooms reducing their specialist, or ‘beat’, reporters, health-e helps to sustain standards of health coverage by providing high quality material produced by journalists who have a thorough understanding of health and health issues.

‘We have been incredibly fortunate to have excellent journalists who were prepared to step off the career ladder and build something different and unique,’ says Mariejie Myburg, chairperson the health-e board. ‘They do not just work for health-e, they are health-e. They have practised journalism in a way that is honest and ethical, and have faced the opposition that this inevitably arouses without the shield of a mighty media house.’