TAC to fight on 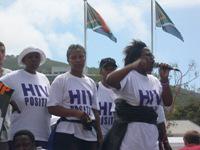 The Treatment Action Campaign (TAC) has vowed to continue using the courts to protect those living with HIV. The Cape Town High Court recently ruled in its favor to stop Dr Matthias Rath from conducting unauthorized clinical trials and promoting his multivitamins to people living with AIDS.

Health Minister, Dr Manto Tshabalala-Msimang and Health Director-General Thami Mseleku, were cited as respondents in this widely-publicized court case. The new TAC chairperson Nonkosi Khumalo, vowed that her organization will continue turning to the law to fight for the rights of HIV-positive people.

‘We do not want to fight our own government. But we want to emphasize that if we see something wrong, we will continue using the courts,’ Khumalo said.

The court ruling ordered both Tshabalala-Msimang and Mseleku, to take reasonable steps to prevent Rath and his foundation from conducting further trials and directed Rath to stop promoting any of his supposed AIDS treatment, particularly his flagship, Vita Cell, unless it is approved by the Medicines Control Council (MCC). Rath was able to promote his vitamins as treatment for AIDS due to a lack of policy regulating complementary medicines in South Africa. Health Director-General, Thami Mseleku, admits that it is a battle to control the industry.

Meanwhile, Dr Zweli Mkhize, the new chairperson of the African National Congress’s subcommittee on education and health, has called on both TAC and the ANC-led government to stop fighting each other and focus on what he calls a ‘common problem’.

‘We could avoid’¦ fighting and criticizing each other at close and personal level. Our committee role is to ensure that we do not have those kinds of rough encounters… I get very envious to see a lot of energy that gets spent when we’re fighting among each other, instead of fighting against the common problem. I believe that if we were to work together we will be much closer towards defeating the common problem than when we are much scattered,’ said the soft-spoken, Dr Mkhize.

The TAC’s Khumalo responded by saying that although her organization is ready to work with the new leadership of the ruling party, it will not hesitate to take action where it’s needed.

‘We hope that we will have a good relationship with the new ANC leadership. But our tasks on ensuring that all government programs are implemented will continue. And where the government is not doing well, we will continue to put more pressure,’ she said.

The judgment against Dr Matthias Rath – who operates largely in the Western Cape townships – should set a precedent for action to others who continue selling untested and unapproved concoctions as AIDS cures.

Dr. Hugo Templeman, a Dutch physician who runs one of the best clinics in the impoverished rural village of Elandsdoorn in Limpopo province says that his is a model rural clinic.

The senior regional HIV/AIDS coordinator for the United Nations’ High Commission for Refugees, says the inclusion of refugees in South Africa’s antiretroviral therapy programme will not result in the influx of refugees into the country.