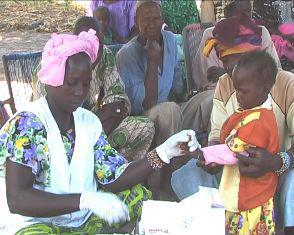 Medecins Sans Frontieres (MSF) has made an urgent call for the wider implementation of the newer and more effective anti-malaria strategies in an effort to save lives.

Malaria still kills a child every 30 seconds worldwide while nine out 10 of these deaths occur in sub-Saharan Africa, predominantly among young children. According to the World Health Organisation, one in every five childhood deaths is due to the effects of malaria.

An MSF report released in Johannesburg yesterday (SUBS: TUESDAY) describes the organisation’s work in Sierra Leone, Chad and Mali and shows that unnecessary illness and death can be avoided with simple, affordable treatment and diagnostic tools available today.

The report follows the launch last week in New York of an ambitious new Global Malaria Action Plan aimed at reducing the number of malaria deaths to near zero by 2015, with world leaders committing nearly US$3-billion to ensure it succeeds.

MSF General Director Meinie Nicolai said that newer and more effective drugs were arriving on the shelves while rapid tests that can confirm the diagnosis in 15 minutes do exist, but that many efforts were failing at the last hurdle while scores of sick people, especially children, do not get the treatment they need.

Yet, the reality is that in many countries where malaria is the main cause of death and illness very few people receive the effective anti-malarial treatment they need: only 3 percent of children in need in African countries received ACTs.

MSF found that in large parts of sub-Saharan Africa where they worked, the cost of health care was a huge deterrent to seeking health care. In Sierra Leone, for example, only 12% of children suspected of having malaria received efficient treatment in the health services.

Another barrier was the fact that many rural communities are very remote and far from any health services, while they are cut off from any access during the rainy season. MSF has had great success involving malaria village workers in reaching and treating patients where they live.

In Mali, MSF combined free health care with the malaria village worker strategy and within a year tripled the number of malaria cases detected and treated.

The strategy was made possible with user-friendly rapid tests which allow lay people with basic training to confirm if the patient’s fever is indeed caused by malaria and dispensing the drugs free of charge.

‘Malaria workers are not the silver bullet, but they allow us to efficiently bridge the gap where health structures are not accessible,’ says Christine Jamet, head of MSF’s mission in Chad.

Jamet warned that it should not exempt the authorities from extending access to care, especially as people who test negative for malaria must be treated for whatever caused their fever and complex cases need to be referred to a health structure.

MSF points out that the current World Health Organisation guidelines recommend that all children with fever, in high endemic regions, be treated with anti-malarial drugs.

However, in Sierra Leone, a high transmission area, systematic use of rapid tests in an MSF project in Bo showed that between 30% and 40% of the suspected cases under five were actually not malaria.

Not using the rapid test means that the children will receive treatment for the wrong disease and no further examination will be performed to check what actually causes the fever.

MSF said shipping tests and drugs to the country was not enough – measures to actually ensure their delivery to patients needed to be implemented urgently.

The LSDI malaria programme initiated a spraying programme in southern Mozambique in 2000. The overall prevalence of the disease in children had decreased by the 2001/2002 malaria season by 70% in Mozambique, while malaria incidence in children had reduced by 80% in Swaziland and a staggering 91% in KwaZulu-Natal. ‘ health-e news.