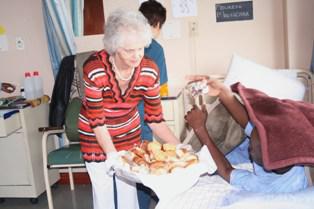 Gloria has the symptoms of advanced AIDS, including dementia, and is unlikely to recover. She has been discharged from hospital to spend her last days being cared for by staff at the Dream Centre, a hospice based in Pinetown.

‘Many of the patients don’t have anyone to look after them. They come here with nothing and don’t get any visitors,’ says Isabel Heunis, a volunteer who delivers toiletries and little treats to patients every week.

The red-brick six-storey building houses 120 patients who have been discharged from hospitals but who are too sick to be cared for by families at home. It could house 240 patients but a lack of funding makes it impossible for the hospice to open up more beds.

Despite the fact that the Dream Centre is a hospice for people with AIDS, only about a quarter of the patients die as many are now on antiretroviral medication, says Dr Portia Mkhize, one of the centre’s two doctors.

‘It is rewarding to work here. The patients are referred here from hospitals and we make sure that they are on ARVs. We rehabilitate them with physiotherapy. Our social worker helps them to get grants. Then, at the end of the day when we discharge them, we know that they are doing well on ARVs and have a social grant to help them,’ says Mkhize, who has worked at the centre for the past year.

One of the big problems that the hospice faces is the ‘dumping’ of very sick patients on it by hospitals.

‘Some have run out of medical aid and so the private hospitals dump them here. Others are very, very sick and the hospitals don’t want their deaths to be on their mortality statistics. So they bring them here and they stay two or three days and then they die,’ says Public Relations manager Neil McDonald. ‘This dumping happens especially on a Friday afternoon.’

Patients who die within 24 hours of admission are not included on the hospice’s death statistics.

The hospice has been trying to get itself accredited as an ARV site as, at present, staff members have to load up patients in ambulances every month and take them to the local clinic to get their ARVs. However, there are obstacles as they don’t have some of the medical equipment required to get accreditation.

Most of funds for the centre come from a R210 per patient daily subsidy from the health department, says general manager Neville de Witt. Three meals a day, medication and staff salaries must be squeezed out of that. The hospice also has to buy its own equipment such as washing machines and fridges.

McDonald spends much of his time fundraising for the hospice, and relies on donations and a team of local and international volunteers to make the place bearable for patients.

‘I wouldn’t be able to function without the volunteers, especially those from the Netherlands and the members of the Westville Baptist Church and the New Enterprise Church who help out every Wednesday,’ says McDonald.

Once a week, Heunis and her friends package the donations of sweets and toiletries and distribute them to patients, sew curtains and make Christmas presents for patients.

‘A few years ago, I had a friend who died here. When I came to visit her I saw that there were a lot of things needed for the patients,’ says Heunis as she pushes a trolley with donated toiletries, sweets and pastries from ward to ward.

One of the big needs was new pyjamas as so many patients have diarrhoea and need to change frequently. A Dutch organisation recently donated 500 pairs of new pyjamas.

The majority of the Dream Centre’s patients also don’t have identity documents, so the social worker helps them to get ID documents so that they can apply for social grants.

Peripheral neuropathy is a common condition amongst people with HIV and it damages the nerves in the feet, making it hard and painful to walk. In the physiotherapy room, Thulani is being helped to walk by a young Dutch volunteer. Other patients are on walking on treadmills donated to the hospice or pulling themselves along between parallel bars.

Other patients, particularly those with TB, are encouraged to sit outside in the garden.

But the majority are sickly and lie on their beds, only brightening up when the trolley of treats comes into their ward.

‘There is no time limit on how long patients can stay here,’ says McDonald. ‘They can just stay until they are ready to leave.’ ‘ health-e news.