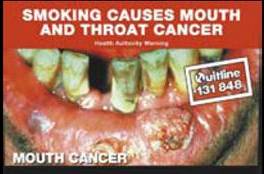 South African smokers will soon have to brave gory pictures capturing the effects of smoking when they buy their packs.

Smokers will soon be confronted with grim pictures of people with cancer and rotten teeth when they buy their cigarettes, according to Health Minister Barbara Hogan.

Opening the World Health Organisation’s international meeting on tobacco control in Durban yesterday (17 November), Hogan commended the National Council of Provinces for passing a Bill four days ago that will allow pictorial warnings on cigarette packages.

‘Pictorial warnings on tobacco products will assist those who cannot read to make informed decisions about smoking,’ Hogan told the meeting.

Some 600 delegates from 100 countries have come to South Africa to refine the international treaty called the WHO Framework Convention on Tobacco Control. Some 160 countries have already signed the convention, which obliges them to implement laws and policies to protect their citizens from exposure to tobacco products and smoke and to control the supply of these products.

The World Health Organisation’s Director-General, Margaret Chan, described smoking as being ‘the single largest preventable cause of deaths in the world’.

According to the WHO, 5.4 million people died of  smoking-related illnesses including cancer and heart disease in 2004, and that this figure will jump to eight million by 2030 ‘ with 80 percent of those deaths in the developing world.

Hogan and various WHO officials unveiled a ‘death clock’ yesterday that keeps track of how many tobacco related deaths have occurred in the world over the past eight years since countries started to debate the WHO Framework Convention on Tobacco Control.

When the velvet curtain was pulled off the clock at lunchtime yesterday, the deaths stood at 40 194 002 ‘ but not for long as every 5.8 seconds another death was recorded.

‘We need to slow the clock down and to do that we don’t need miracle cures,’ said Hogan. ‘When cigarettes are cheap, easily available and widely promoted, then people smoke. But as South Africa and Thailand have shown, it is possible to discourage people from smoking by increasing the price of tobacco products and stopping advertising.’

Three key recommendations on how tobacco control measures should be strengthened are due to be debated by country delegates. These relate to stronger and bigger warnings on tobacco products; tighter controls over tobacco advertising, promotion and sponsorship and preventing the tobacco industry from influencing tobacco control policies.

She described how the tobacco industry was pressurising the governments of Honduras and Guatemala, for example, not to implement the convention as they claimed this would undermine free trade agreements.

South African Health Director-General Thami Mseleku said that South Africa supported the draft measures and that this country was ‘working very hard to curtail the influence of the tobacco industry’, despite the ‘tricks’ used by the industry. ‘ health-e news.