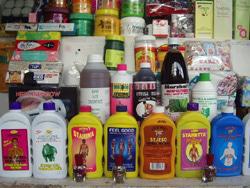 Sometimes one has to see the humorous side of quackery. By Nathan Geffen

Why Ozone Rectal Therapy is not the next cure for AIDS

I advised Health-e on a documentary on unproven AIDS remedies and accompanied their television team when they visited and interviewed a Mr Vlok. He runs a company called NCM-O3. That stands for “Natural Complementary Medicine with Ozone.”

Vlok turned out to be a white-haired bespectacled gentleman in a grey suit. His dingy office walls were covered with pamphlets promoting ozone as a treatment for AIDS. How is ozone administered? Well, by suppository up the rectum – best done at night apparently.

He explained to us, somewhat incoherently and in a hushed tone, how Mark Shuttleworth conducted an experiment in space which achieved the great breakthrough in ozone treatment. Shuttleworth, no doubt, would be most intrigued to learn that he has been part of such an auspicious medical discovery.

Vlok also drew a fantastical picture of how ozone kills HIV. He explained to us that, unlike antiretrovirals (ARVs), ozone gets into the body’s HIV infected CD4 cells (immune cells essential for fighting infections). I was tempted to ask him to explain his understanding of protease inhibitors and reverse transcriptase inhibitors, two classes of ARVs which stop HIV replicating inside CD4 cells, but thought better of it.

The interviewer asked him how ozone, which does not only kill HIV but cancerous cells and many other viruses and germs according to Vlok, knew how to differentiate between healthy cells, viruses and germs. “The infected CD4 cells have a marker on them.” He answered, as if it was obvious. Like a bullseye, I imagined.

Not only does Vlok sell ozone treatment, he also sells two other products including one called Qina which contains African Potato (hypoxis) extract. They work wonders he explained, but said no-one understood yet why Qina worked so well. Interesting this, because the only controlled clinical trial done on hypoxis in people with HIV that I am aware of had to be terminated after a few weeks because the patients taking hypoxis did much worse than those taking placebo.

His whole three-month package, he explained, cost R2,000 to R4,000. He told us this was much cheaper than ARVs. Truth does not get in the way of Vlok’s facts. This is nearly double the price of ARVs in the private sector for three months. And ARVs actually work.

He kept on stressing at the beginning of the interview how he had worked in a hospital. What was his job the interviewer eventually asked? A clerk, he answered sheepishly.

Vlok said that he tests for HIV on his premisses, which, incidentally, is in breach of the National Health Act. He even showed us the test he uses. When people test positive, he reassures them that it is ok and that they won’t die. I imagine a possible continuation, “Today is the first day of the rest of your life. But there is the small matter of those enemas…”

Interestingly, the building in which Vlok operates is home to several quacks with alluring names including Maama Rehema and Dr Haroona, who, besides treating AIDS, stops bad luck, brings back lost lovers, enlarges penises, tightens vaginas and destroys the tokoloshe. There’s also a Dr Saibu, who does pretty much the same and curiously lists Mr Vlok’s email address as the way to contact her.

I did some research on the Internet on ozone therapy. A whole gamut of people offer it as a treatment for many diseases, including AIDS. Mr Vlok is definitely not the first person to come up with this idea. Even his method of administering it is not unique.

Ozone has in fact been tested as a treatment for AIDS. I was surprised by this. Most of the time quacks sell products which have never been tested in controlled clinical trials, the scientific standard for determining if a medicine is effective. This gives them sufficient leeway to use unconfirmed anecdotes to market their products.

In the early 1990s, long before HIV had become a chronic manageable illness and when the search for treatments was desperate, a Canadian research team injected ozone into the blood of patients with HIV. They did this for eight weeks and then observed them for a month. The ozone-treated patients did no better on any relevant measurement than a control group. In other words, we can safely assume that ozone likely does not work as an HIV treatment.

Mr Vlok is by no means exceptional. And although he is not benign, he is far less of a problem than, say, Matthias Rath who received the support of Manto Tshabalala-Msimang when he promoted vitamins as a treatment for AIDS.

The support of quack potions, such as Virodene, epitomised former President Mbeki and his health minister’s response to the HIV epidemic.

Quacks occur in every society and it is foolhardy to believe the problem of quackery will disappear. But in South Africa they have become mainstream, instead of operating on the fringes of society, as they do in most other countries with sophisticated health care infrastructures like ours. Quacks advertising cures for AIDS and other diseases act with impunity in South Africa, even though it is illegal to sell a medicine for a viral infection such as HIV, unless it has been registered by the Medicines Control Council. The law is simply not enforced, a legacy of Tshabalala-Msimang’s reign as health minister.

Quackery is unfortunately not just a source of amusement. Quacks take advantage of vulnerable people faced with life-threatening illnesses.

The consequences are often deadly, usually because people are convinced not to take medicines that really do work. In the post-Mbeki era, it is vital that the rule of law be re-established when it comes to the sale of unregistered medicines.

Nathan Geffen is Treasurer of the Treatment Action  Campaign

* Health-e’s TV documentary, ‘Quack Alert’ is being broadcast on e-TV’s 3rd Degree on Tuesday 25 November between 8-8.30pm. It will then be rescreened at 9pm on e-TV’s DSTV channel (403) at 9pm, followed by a panel discussion with some of the featured ‘quacks’ plus HIV Clincians Society President Dr Francios Venter.