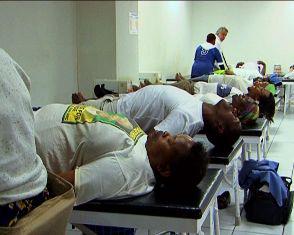 Ceragem is a Korean massage bed registered by the American Food and Drug Administration in the US for the treatment of minor aches and pains in arthritis ‘ but in South Africa it is being touted as an AIDS cure.

Businessman Morokane Choma operates from a building in central Johannesburg, promoting Ceragem to a group of people, many of whom are clearly in pain and cannot move properly.

‘Halala Ceragem, halala,’ bellows Choma, in evangelical mode to the large audience who erupt in applause.

‘I didn’t run away from them. I kept giving them hope and the spirit of saying they will be healed one day, three months, four months, five months coming to Ceragem, they got up and told me, Brother Choma, it’s going well!’

Choma told Health-e that patients came to him on their ‘own free will’ and all the evidence they needed that Ceragem worked was testimonies former clients.

‘Let’s say someone comes with a low CD4 count and everything. Now after experiencing the effectiveness of Ceragem, they go back to their doctors and the doctors write them notes and say, wow ‘ you are now alive because your CD4 count is up and that means Ceragem gave that infrared and circulated the blood, unblocking the nerves and everything’¦so that is how we operate yes,’ claims Choma.

Signs around the Ceragem offices describe the massage bed as ‘the world’s number one portable thermal massager’ sold in 50 countries worldwide. Aside from three retail centres in Johannesburg, there are also branches in Pretoria and Hazyview.

However, in 2005, the Attorney General of Texas banned Ceragem in his state for making inflated claims such as being able to cure cancer, epilepsy, obesity and heart disease.

A line of people lie on beds along the one wall of Choma’s large office, each lying on a stretcher bed on top of what looks like an open egg box containing nine plastic ‘eggs’. When the machine connected to the ‘eggs’ is switched on, the ‘eggs’ heat up tremendously and move — supposedly giving relief to sore muscles.

Xoli Hlatswayo from Soweto says the only reason he can ‘almost’ speak again today, after a stroke, is because of Ceragem. After his three-month treatment at one of the retail outlets in Johannesburg, he bought his own machine at R7000. Now people can come to him for help at R40 a session.