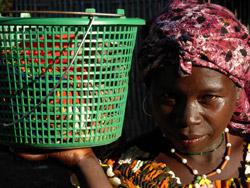 MOZAMBIQUE -(PlusNews) – When Mariana Uchandidhora’s husband was killed in a traffic accident in South Africa a year ago, tradition required that she have sex with her deceased husband’s brother in order to be purified.

Uchandidhora, 36, refused, arguing that her brother-in-law was much younger than she was, but the family found an older man from outside the family to carry out the ritual, known as “khupita khufa”. Two months later she discovered that she was both pregnant and HIV-positive.

The pregnancy did not go to full term, but Uchandidhora is now a patient in Beira Central Hospital, where she is being treated for malaria and AIDS. The jobless mother of five, who lives in the Marromeu district of Beira, is convinced she contracted the virus during the purification ritual.

Widows who submit to the ritual are obliged to have unprotected sex three times a day over the course of a week. The practice is thought to purify a woman and her home after her husband’s death and is common among members of the Sena ethnic group in Sofala, where the HIV prevalence rate is 23 percent, one of the country’s highest.

Similar purification rituals are also practised in the neighbouring provinces of Tete and ZambÃ©zia. Although there are no precise figures, Health Ministry officials believe such purification rites are contributing to the spread of HIV in Mozambique.

Failure to carry out purification rites is thought to bring bad luck to the family such as unemployment, illness and even death. As a result, widows are under considerable pressure to submit to the ritual.

The custom is also not without risk to male participants. If, for example, the man does not achieve the three-times-a-day sexual target, according to traditional beliefs he will become sick and possibly die. Many take the risk in return for payment or a share of the deceased’s possessions.

For 29-year-old Dique LampiÃ£o, participating in the purification ceremony of his childhood friend Maria* meant more than just money. “I thought God was opening up the path to make my romantic dream come true,” he told IRIN/PlusNews.

He had had a crush on Maria since they were children, but she married someone else before he could muster the courage to confess his love. Five years later, Maria’s husband died from an unknown illness and it became necessary to hire a man for the khupita khufa. LampiÃ£o jumped at the chance and was accepted by the widow’s family.

Two months later, he began coughing up blood and was diagnosed with tuberculosis, which he believed was the result of failing to meet the daily sexual target; not long afterwards he was also diagnosed with HIV. LampiÃ£o believes he contracted the virus from Maria.

Juvinaldo AmÃ³s, provincial coordinator in charge of major epidemics in Sofala, emphasised the need for a change in attitude to prevent khupita khufa from spreading HIV. “We need strategies that include awareness-raising, so that the population understands the risks of unprotected sex in a traditional ceremony,” he said.
At the Provincial Nucleus for the Fight Against HIV/AIDS in Sofala, Leonel Simango, a planning, monitoring and evaluation specialist, said already fewer families were practicing the ritual as a result of the awareness-raising work carried out by his department in cooperation with several NGOs.

His department invites community leaders in all the province’s districts to annual seminars on the relationship between certain purification rites and HIV. “We know there’s still much to be done to raise the awareness of more superstitious communities, but we’re making a concerted effort,” he said.

According to the provincial secretary of the Mozambique Association of Traditional Doctors (AMETRAMO) in Sofala, Gumapedje JosÃ© Nhone, there are alternative ways of carrying out the purification ceremony.

One of them requires sacrificing an animal, but this is unpopular because of the cost. “People opt for the sexual relations because they don’t want to sacrifice their goats,” Nhone said.

Another method of purification, involving the preparation of a number of plants and a spiritual blessing ceremony carried out in the presence of the entire family, is even less popular.
Campaigns aimed at stressing the validity of such alternatives have largely failed to convince people that they are as effective as khupita khufa, so AMETRAMO is now carrying out campaigns to encourage the use of condoms during purification rituals.

Even this is not easy. “A lot of people think that if they use a condom the ceremony won’t go well,” Nhone said. “But although I recognise the stubbornness of those who practice it, I do believe in change.”