Home » Sex in the slums 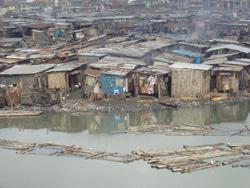 Poor drainage and sanitation facilities leave a permanent foul odour at the bustling market and most residents must wade through several refuse dumps to reach their destinations; an inadequate public power supply means that noise and fumes from generators permanently fill the air, along with blaring music from the numerous brothels and film houses.

None of this deters the slum’s numerous commercial activities, the most important of which is the sex trade.

Sex work is not legal in Nigeria, but is widespread throughout the country. With virtually no modern infrastructure except for the dilapidated rail line that passes through the area, Ijora Badia is home to hundreds of commercial sex workers who ply their trade day and night, beckoning potential customers from doorways.

Margaret Onah, a coordinator at Safe Haven International, a non-governmental organisation that provides support and health services to commercial sex workers, thought she had seen it all but was unprepared for what she described as “One of the largest concentrations of sex workers in the country – virtually every house in the community housed sex workers,” she told IRIN/PlusNews.

Not many of the workers were interested in hearing about the dangers of contracting HIV. “They were quick, however, to say they take necessary precautions, and that they need the money they get to survive,” she said. “I left [Ijora] Badia realising that there is a lot of work to do.”
Femi Harrison, a volunteer with the International Mobile Educator Organisation, which works to raise awareness about HIV/AIDS and other sexually transmitted diseases in the slum, estimated that there were at least 40 brothels in Ijora Badia, with the smaller establishments each having around 20 rooms and the largest having 120. Many other makeshift structures also provide rooms for sexual transactions, mostly at night.

Rita said she started doing sex work after her shop burnt down some years ago. “I am in this trade so that I won’t die of hunger,” she told IRIN/PlusNews. She tries to protect herself by insisting on condoms, but some of her colleagues said they sometimes make an exception for customers who are willing to pay a premium.

Many of the younger women are from the mid-western part of Nigeria and have been tricked into coming to Lagos by false promises, only to find themselves in the sex industry.

Some of the sex workers commute to Ijora Badia from other parts of Lagos at night and leave in the morning, while others come to work there for a few months. The high level of fluctuation in the population is a challenge to field workers like Harrison.

“If you call a female sex worker now and ask her what she knows about HIV/AIDS or condoms, she may display near total ignorance because she is new in the community,” he said. “They move in and move out and that is why our work is a mobile one. We keep drumming the message as new people move in, hoping that they will take necessary precautions.”

In 2007 the International Mobile Educator Organisation found that of 100 sex workers who agreed to be tested for HIV, 25 were HIV-positive.

“We can’t dictate to people what they should or shouldn’t do, but as much as possible we expect people to live responsibly and take the various campaigns against HIV/AIDS more seriously,” said Chief Titus Aworetan, a local community leader who believes the government should do more to curb the sex trade in Ijora Badia.
Considering that many of the sex workers claim they are in it to survive, the government may need to provide necessary amenities and avenues for people to be gainfully employed,” he told IRIN/PlusNews.

Harrison pointed out that despite many promises by politicians in the past, not much had been done to improve conditions in the slum.